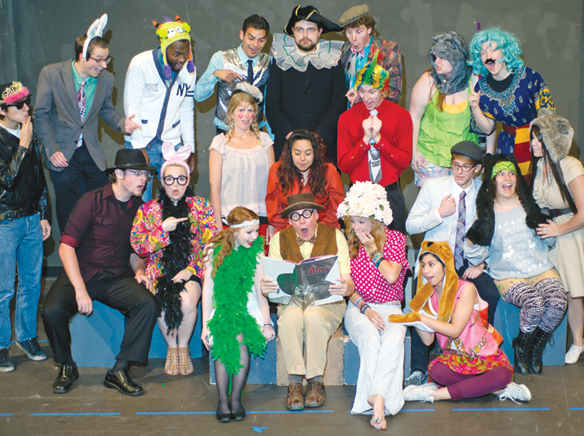 The story of “Alice in Wonderland” has always been a mind-bender. The production of the story by Grossmont College Theatre Arts leads Alice and the audience into a rabbit hole to characters even stranger than Lewis Carroll’s original version.

Director Jerry Hager’s intention was to take people for extra twists and turns.

The story of “Alice in Wonderland” has always been a mind-bender. The production of the story by Grossmont College Theatre Arts leads Alice and the audience into a rabbit hole to characters even stranger than Lewis Carroll’s original version.

Director Jerry Hager’s intention was to take people for extra twists and turns.

“For me, this was a great challenge, because Alice as a story we all know inside and out. For my own reasons, I’ve chosen to tweak the tale, take it for a spin and give it a “new” set of clothes,” he stated.

Indeed, the clothes take the prize for originality. The familiar tale gets extra interest with Steampunk Carnival costumes.

“The costumes are excellent,” said Richard Ferrell, who took 1st place in the costume contest before last Saturday’s production.

Alice, perfectly cast by Heather Armstrong, is the one character that has kept to the original in costume. Finding herself in the rabbit hole, to the tune of “Go Ask Alice,” she becomes even more bewildered with the repertoire of characters she meets.

“Riddles, dreams and all are theirs to seize,” said the enigmatic Hookah, played by Luke Benning. “When madness speaks, will you listen?”

The real trouble starts when a couple of sugar tarts disappear. Everyone is frantic in deciding who the culprit is.

The strange plot is peppered with philosophical statements like something one would think up in a dream. Speaking of pepper, all of the characters have sneezing fits from a Pepper-Ade recipe.

“Nothing is as it seems,” says the Hookah.

And Knave has a thing or two to say about Time. “If you knew Time as well as I do, you wouldn’t say ‘It,’ you would say ‘him,’” he quips.

By the time the eclectic collection of characters figures out who stole the precious pastries, time, in fact, no longer has any relativity to the plot.

Jim Papageorge, who placed 2nd in the Steampunk costume contest before Saturday’s production, said the play “was a magic ride of absurdity in Wonderland.”

“Her energy level was high. I loved her ‘lost in space’ attitude,” Papageorge said.

So as you settle in for the last run of the “Alice in Wonderland” play next weekend at the Stagehouse Theater at Grossmont College, be prepared to encounter an alternate reality. Puzzle-solvers and lovers of dream-like non-sequiturs will delight in the production.