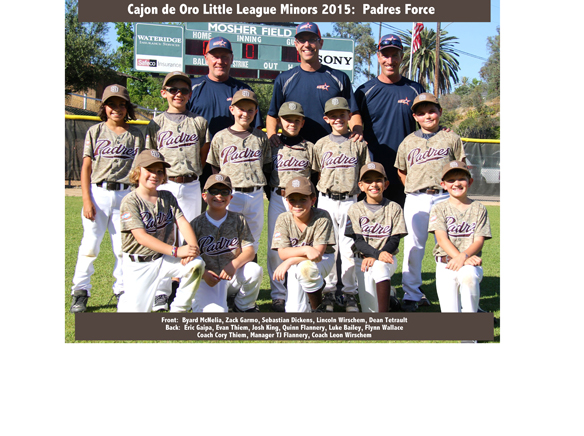 On what was forecast to be a day of gray skies and consistent showers, the start of the Cajon De Oro Tournament of Champions was destined to be played. The Padres Force, coming off a heartbreak loss earlier in the week 12-2, were set to prove its worthiness against a talented team, The Swinging Friars.

On what was forecast to be a day of gray skies and consistent showers, the start of the Cajon De Oro Tournament of Champions was destined to be played. The Padres Force, coming off a heartbreak loss earlier in the week 12-2, were set to prove its worthiness against a talented team, The Swinging Friars.

Earlier in the regular season the Force defeated the Friars quite easily. The fearless Force came into this contest at a stellar 14 wins and seven losses. The stare of determination could be seen in warm-ups from a distance.

“We are pumped up!” said outfielder Eric Gaipa.

The visiting Force opened up the first inning hanging a 2-0 lead, led by cleanup hitter, Evan Thiem with a one out triple that scored two. Force pitcher, Luke Bailey, who had pitched a phenomenal four innings plus the last time out, was lit up for four runs in the bottom of the first inning—highly uncharacteristic for the young pitcher.

Bailey would be switched to shortstop as Lincoln Wirshiem took the hill. Wirshiem ended up having the same fate, as the Friars continued to punish the Force to lead 9–3 at the end of two full innings.

Concluding a brief pep talk Coach T.J. Flannery had his club in focus and locked in to win. Catcher Flynn Wallace walked, and third baseman Evan Thiem stroked one into left center, scoring Flynn, and deciding he wasn’t finished, stole home to narrow the deficit 9-5 Friars. With great success at the plate coach Flannery called Thiem’s number yet again to relieve Wirshiem who would switch to third base. Thiem struck out two, and Flynn Wallace would take out number three in a 3-up-3 down containment of the Friars.

The Force would allow a few more runs, but ultimately the Force outplayed the Swinging Friars at the plate and on the base paths, but despite allowing some unnecessary errors, still managed to hang on to win 14-10. The Force has played TEAM baseball all year.

Hands-down if an MVP were to be selected for this game it would be unanimous for Evan Thiem. Thiem put up great numbers offensively and defensively. While on the hill he struck out six, offensively exploded with a pair of triples, a single, 5 runs batted in, and stole home to boot.

“I would not be as good a pitcher today if it were not for Coach T.J. working with me,” a modest Thiem said.

The Force will move on to play another up two final Cajon De Oro Tournament of Champions finals. The next Cajon De Oro final to be played by the Force was Tuesday, May 26. As hot as this team has become, everyone wants to conquer the squad. Two wins will set up the club for district final play next. Stay tuned, and come support the 9/10 year old Cajon De Oro Force and their phenomenal coaching staff, led by head coach, T.J. Flannery.

Notables:  Outfielder, Zack Garmo went 2-3 with a pair of singles and a walk. Catcher Flynn Wallace went 3-4 with a pair of hits, a walk and a strikeout. Pitcher/infielder Lincoln Wirshiem, reached first on a fielder’s choice, a single, walk and flyout. Second baseman Quinn Flannery 2-5, a walk, pair of singles and struck out twice. Pitcher/infielder Luke Bailey would finish 1-4, single, walk, flyout and strikeout. First baseman Byard Mcnelia 1-3, single, walk, and struck out. Utility man, Josh King was 1-3 with a pair of walks and a single.

When asked what he thought about the game this evening, “Awesome!” outfielder Zack Garmo said.

“I felt scared at the beginning of the game, but we played great at the end.” said outfielder Dean Tetrault.

First basemen Byard Mcnelia added, “It was a great team victory, and awesome that we rallied at the end.”

“A game is never over till it’s over,” added outfielder, Sebastian Dickens.

Wrestlers face off at the 14th annual Bud Harbin Battle by...