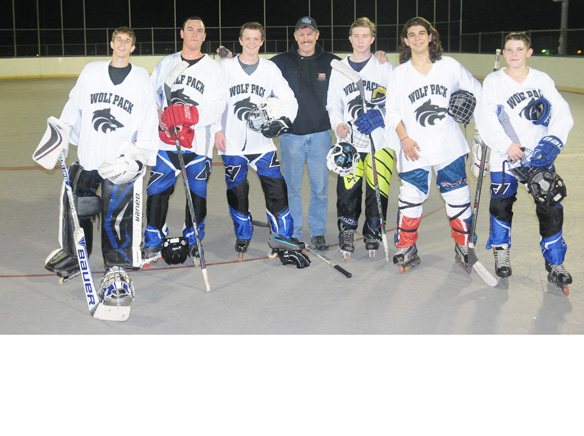 The arrival of the San Diego Gulls of the American Hockey League has definitely pumped up interest in the sport of hockey—both ice and inline—in the San Diego region. The Gulls serve as the top minor league affiliate of the Anaheim Ducks of the National Hockey League and feature top draft picks and players who have played in the NHL on their roster.

The Gulls roared out to a 7-1 start in their new nest at the Valley View Casino Center to push the excitement level of fans even higher.

The arrival of the San Diego Gulls of the American Hockey League has definitely pumped up interest in the sport of hockey—both ice and inline—in the San Diego region. The Gulls serve as the top minor league affiliate of the Anaheim Ducks of the National Hockey League and feature top draft picks and players who have played in the NHL on their roster.

The Gulls roared out to a 7-1 start in their new nest at the Valley View Casino Center to push the excitement level of fans even higher.

Not surprisingly, player turnout for the 17 CIF-Metro Conference roller hockey teams has been good this season, with an upsurge of interest partly due to on-campus recruiting and the presence of the new Gulls professional team.

West Hills High School continues to represent East County schools in the conference, and the Wolf Pack hopes to continue to upgrade its roster for a second-half push at earning a berth in February’s Kiwanis Cup championship playoffs.

The Wolf Pack started the game with five players and added a sixth midway through the game. West Hills used a fast-paced offensive attack that spread out the Bonita Vista defense to zoom in front, 9-0, after the first period. The Wolf Pack tacked on three goals in the middle period to lead 12-0 before closing out the game with 11 goals in the third period.

West Hills out-shot the Barons 51-4 to claim the win.

There are 11 players total on this season's Wolf Pack squad, though four play ice hockey concurrently to the inline season. That can put a drain on the team's roster availability when there are scheduling conflicts.

San Martin and Turnbow are the only seniors on the team. Siminoff, Konold and Frederick are all juniors while Robby Baldwin and Guarino are sophomores and Grover, Klus and Cook are freshmen.

San Martin is an impact player between the pipes after leading the Wolf Pack to the 2013 Kiwanis Cup championship. He made 36 saves in the team's season opening 6-4 non-league loss against conference newcomer Escondido Charter.

The elder Baldwin said the team's goal this season is to land a berth in the playoffs and see where it leads from there. The team, which is expected to re-fortify itself with missing players on Jan. 18, is hoping to improve on last season's 4-16 record.

“In order for us to get into the playoffs, we have to be one of the top 12 teams in the conference seeding-wise,” the WHHS coach said. “When we have everyone together, I think we're stronger than last year. When we have all the guys together, we can compete with just about everyone. It's a matter of getting everyone together.”

“Escondido Charter has a lot more travel ice kids than we do but West Hills kept the game very close the entire time,” he explained.  “For most of the game we were tied and we were ahead for a short time even though we were missing sniper Cade Frederick.”

The game was tied 3-3 at the end of the second period and Escondido Charter scored the final two goals of the contest to snap a 4-4 deadlock.

Following the season opening loss to the White Tigers, the Wolf Pack played to a 5-5 tie against St. Augustine in a Central League game on Dec. 3. West Hills then dropped a 14-1 league decision to top-ranked Cathedral Catholic on Dec. 10 before defeating Bonita Vista.

Guarino made four saves between the pipes to earn the shutout victory.

Grover scored the lone West Hills goal in the loss to Cathedral Catholic while the younger Baldwin scored two goals and Siminoff, Konold and Turnbow each chipped in with one goal in the game against St. Augustine. Grover, Siminoff and Guarino all had one assist in the Central League game.

The Gulls’ return to San Diego after a nine-year absence of pro hockey in the region has certainly stirred up renewed interest in the sport. The team’s home attendance figures attest to that (second among the 30 teams in the league with an average of more than 8,600 fans per game).

But having a professional team within viewing distance goes farther than just cheering on wins. It’s about creating a hockey culture.

“The amateur ice and roller hockey scene is very excited about the Gulls AHL team and we all hope that it will create some new interest in the sport of hockey,” the elder Baldwin explained. “Interest in hockey certainly declined after the departure of the old San Diego Gulls (of the ECHL) and now we are all willing to work with the new Gulls to promote hockey together.

“There's around 5,000 ice or roller hockey players in San Diego County who currently play on organized teams and this will be the base of the Gulls’ fan support system.”