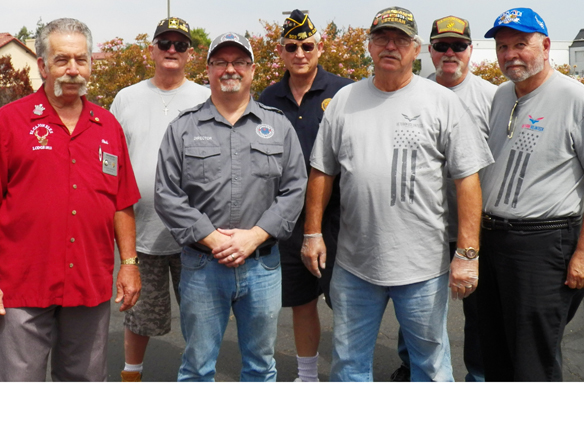 Members of El Cajon volunteer organizations came together on the morning of Friday, August 25, to host and support food assistance to San Diego area active-duty and military veteran families. The hour-long event, held in the parking lot of El Cajon Elks Lodge #1812, was staged on behalf of Food 4 Warriors, a program offered by nonprofit charity Us 4 Warriors.

Members of El Cajon volunteer organizations came together on the morning of Friday, August 25, to host and support food assistance to San Diego area active-duty and military veteran families. The hour-long event, held in the parking lot of El Cajon Elks Lodge #1812, was staged on behalf of Food 4 Warriors, a program offered by nonprofit charity Us 4 Warriors.

The day began with El Cajon American Legion Post 303 Commander Wes Schermann and other members of his veterans service organization giving $100 as a donation in support of these efforts to overcome “food insecurity” among military families. That phrase describes the circumstances of individuals or families who are going hungry or who lack sufficient food for health and wellness. Although less well-known than homelessness as a military service-linked risk, food insecurity is a problem that analysts estimate afflicts about double the number of veterans and active-duty troops as in the general population.

Volunteers from the Elks Lodge and Post 303 were part of the team assembled to assist other volunteers serving with Food 4 Warriors. These assistants had filled grocery bags with nutritious food earlier in the day, and they also helped by carrying bags of food to cars of those set to receive assistance.

“We want to help out as many people as we can,” stated Bobby Erdmann, volunteer coordinator with Food 4 Warriors for a little over a year. Around 170 recipients had signed up for the program that day. This was the second such effort in East County from the group. The first food distribution staged at the El Cajon Elks Lodge was in the spring, with about 20 families participating in getting the food assistance.

Schermann said of his post’s partnering with Food 4 Warriors, “This is a great organization that helps out warriors and does a lot for veterans. This is a great thing.”

Tony Stewart, president and CEO of Us 4 Warriors, was there as chief volunteer from what he calls the “Board of Doers” for the three-year-old organization. Stewart further explained that military recipients sign up to anonymously online to receive the help. The amount of food assistance is based on household size. “We want to make sure nobody goes hungry,” Stewart continued. Each food distribution event costs $500. Besides cash donations, the nonprofit pays for these efforts through ticket sales from special events.

Will C, a Los Angeles-based stand-up comedian, attended to assist and then to perform at one of those fundraising events the following evening. Will C had attended the first El Cajon food distribution. He said, “I am amazed at how much food and how many volunteers showed up this time. Everything is working like a fine, old machine today. This is amazing today.” Will C founded the organization Veterans of Comedy in 2014, as a group of military veterans who perform stand-up comedy professionally.

Stewart said, “We are happy to see lots of smiles from the people we are helping.”

The El Cajon site is one of seven throughout San Diego County, where monthly Food 4 Warriors distributions are conducted. September’s event will be in Oceanside. The next East County food drop is planned for 2018. More information on scheduled fundraisers and upcoming food distribution sites is available online at the website www.Us4Warriors.org. 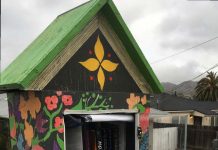