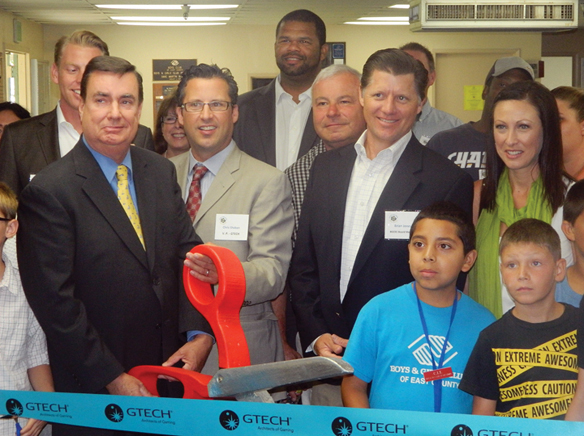 LAKESIDE — Members of the Lakeside Boys & Girls Club were given quite a treat on Thursday, July 12.

LAKESIDE — Members of the Lakeside Boys & Girls Club were given quite a treat on Thursday, July 12.

Not only were the children graced by the visit of several local political leaders, including state senator Joel Anderson (R-Alpine) and assemblyman Brian Jones (R-Santee), but they were given something even more tangible aand important.
After a symbolic ribbon-cutting ceremony, the GTECH Corporation unveiled a new After School Advantage computer lab at the Boys & Girls Club of East County in Lakeside. GTECH’s After School Advantage is a nationwide program that began in 1999 to serve underprivileged youth in communities where GTECH conducts business. GTECH Corporation has been a lottery technology supplier to the California Lottery since 1985, and a supporter of their efforts to raise $23 billion for students attending California public schools.

Several notable individuals, including executives from GTECH, Assemblyman Brian Jones, and Senator Joel Anderson joined CEO of the Boys & Girls Club of East County Forrest Higgins on Thursday, July 12 to celebrate the new lab with a ribbon-cutting ceremony. The new computer lab will give local youth the opportunity to gain indispensable computer skills crucial to their education and future.
“This state-of-the-art computer lab for the Boys and Girls Club of East County demonstrates that the high-tech education of our youth is GTECH’s priority,” said California Senator Joel Anderson. “I applaud GTECH for providing our youngsters a head start in today’s high tech world.”

“The Boys and Girls Club means a great deal to me personally as a prior club kid,” said California Assemblyman Brian Jones (R-Santee), 77th Assembly District. “I have had the privilege of witnessing firsthand the extraordinary impact the organization has on kids in our community. I can think of no group more deserving of this grant — it will provide them yet another tool as they continue to enrich the lives of our youth. I am grateful to GTECH for recognizing the exceptional value this club brings to the County of San Diego.”

GTECH donated $25,000 in state-of-art technology to the Boys & Girls Club of East County. The Club received 23 Dell desktop computers equipped with all of the latest software.