Cuyamaca College President Julianna Barnes (right) led attendees in a moment of silence for the 2,977 lives lost when on Sept. 11, 2001 two planes commandeered by terrorists flew into the twin New York World Trade Center towers, one flew into the Pentagon and one crashed in Shanksville, Pennsylvania in an effort to avoid further destruction. 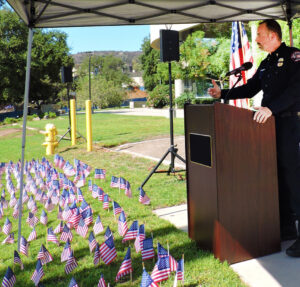 Associated Student Government President Maryam Rammahi, born a few months after the tragic day, conceded it is difficult for young students like herself to understand when others speak of 9/11 as a defining moment for an entire generation.

“As I watched students place flags this week, I was awed with the realization that many of them are too young to remember, or perhaps weren’t even born,” Barnes said.