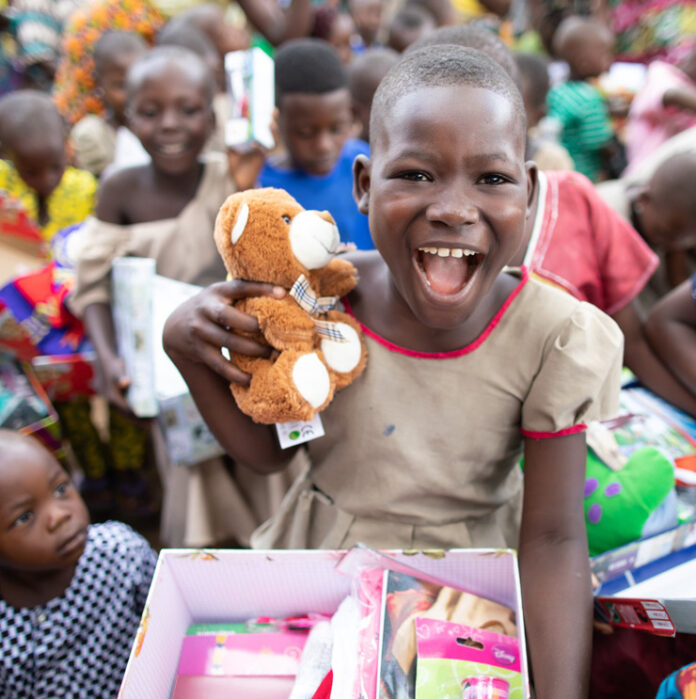 Samaritan’s Purse project Operation Christmas Child helps millions of children in need across the globe with a simple gift, a shoebox filled with fun toys, school supplies, and hygiene products. For more than 25 years, San Diego residents have been a part of the program and this year hopes to collect more than 43,500 shoeboxes in the global goal of reaching 9.7 million children. Now 22, Analyn Elliott, originally from the Philippines, has traveled to local churches and schools, telling her story about the shoebox she received when she was 10-years-old, and how it affected her life forever.

Elliott grew up outside of Cebu, Philippines, living in a tiny house with only one lightbulb with her family. She said growing up, they were not Christians, but her mother who was working for a Christian family, invited her to go to church with them.

“After giving her life to the Lord, my mom taught us to humble ourselves and to pray,” she said.

Elliott said they never received gifts at Christmas or birthdays, and every year, her mom purchased just enough school supplies that she shared with her siblings. Elliott said one year, she asked the Lord for a full box of crayons, like the ones her classmates had, because she knew that her parents could not afford something like that. But then, one day, their pastor invited them to an event at the church. As she got to the church, she saw kids lined up and sitting on the floor. She said she got so excited as she received her shoebox gift from her teacher, she counted 3-2-1, and all the children opened their presents at the same time.

“When I opened my gift, I saw many items in it,” she said. “A washcloth, a toothbrush, and a stuffed bunny,” she said. “I remember cuddling it so tight and it smelled so good. Then my heart jumped when I saw a full box of crayons that I could call mine. I had that box of crayons in my hand, and I realized that God had used that shoebox to answer my prayer.”

Elliott said her family was a victim of the typhoon in the Philippines and had to evacuate. When they got back to their home, the house had completely collapsed.

“In that moment, we prayed to God, that he would provide, and we trusted him,” she said. “We praised God at that time because he answered our prayer quickly. God does provide.”

After that, Elliot was able to attend Samaritan’s Purse’s The Greatest Journey, a 12-lesson discipleship course designed for Operation Christmas Child shoebox recipients. Through this program, children learn how to follow Christ and share him with others, communities are transformed by the power of the Gospel, and new churches are started.

“Because many could not afford the transportation to a church, so I would go to their places and teach the Gospel, so they could hear the Gospel, and that God loves them and cares for them.”

In 2014, Elliott married her husband in the Philippines. Her husband was from Alaska, and they now live near a small town called Sterling in the Alaskan Peninsula. They now have two children. Elliott began participating in Operation Christmas Child in 2017 by beginning to create her own shoebox gifts along with her church family. Last year, she became the spokesperson for Operation Christmas Child.

“I am so grateful for what the Lord has poured into my life,” she said. “Using Operation Christmas Child and continually flowing the gift of his giving.”

Jennifer Lott, Operation Christmas Child project leader, and pastor’s wife at Casa de Oro Bible Church in Spring Valley has been involved with Samaritan’s purse for 20 years, being “near and dear” to her heart. At this church for three years now, they began collecting shoeboxes the first year.

“Every year God has blessed us, and we have been able to do progressively more this year,” she said. “People really enjoyed hearing Analyn’s story, and it was a blessing because you actually get to see the fruits of your labor and what God does with those boxes.”

Lott said it was inspirational to see Elliott, who received a shoebox at 10, then learned about Christ, with God bringing her full circle by bringing her into a church and telling them how that shoebox changed her life.

“It showed her God’s love. She learned the Gospel. And now she is teaching the Gospel,” she said. “God is amazing in how he uses those boxes to get the Gospel out. If you think about it, areas where the Gospel would not normally be sent, it is getting into those areas because of the gift.” 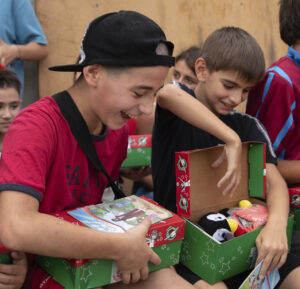 Lott said that though the “drive” for shoeboxes is towards the holidays, that she found out that many people do not have the money during the holidays and that things are more expensive, so now they collect for the shoeboxes year-round, allowing people to donate when they did have extra funds.

“As a church, we all pack the boxes together, and people still have the opportunity to pack them on their own,” she said. “Our church also makes items for the boxes. We have a craft group, so we have pencil packs, skirts, backpacks and all kinds of things.”

Lynn Gray, Operation Christmas Child project leader at El Cajon Wesleyan Church said that they have been packing shoeboxes for four years. Gray has made shoeboxes for years with her family and then about five years ago, she began packing shoeboxes with her daughters and granddaughters. She said Elliott’s appearance at her church was the first time they had a speaker from Operation Christmas Child,

“You do not get to see that often,” she said. “You can see videos, but seeing a person, and hearing the story of how the project changed their lives was very impactful for the people that came. This is our way of giving kids gifts. Some of them may never have had one before. And, to introduce them to Jesus.”

Project leader Debbie Depriest is a first grade teacher at Christian Schools-West Campus in El Cajon, said Elliott came to its weekly chapel and told her story to the children.

“Our children were excited because these children have been bringing Operation Christmas Child Shoeboxes every year for about 18 years,” she said. “The older ones really understood who she was and how special it was to have a shoebox recipient come and talk to us. The little ones listened and were excited, and by the end they grasped who she was and what she did.”

Depriest said she found the program useful for children in the school in understanding what it is like not to have what you need, and to share what we have with others.

“That is why we do it,” she said. “It is simple. It is straight forward. The children that get the boxes also get to hear the word of God which is important to me, and it is important to our school.”

National Collection Week for Operation Christmas Child is Nov. 15 -22. For more information, free materials for groups, instructions on how to pack a shoebox, volunteering and more, visit www.samaritanspurse.org/what-we-do/operation-christmas-child. 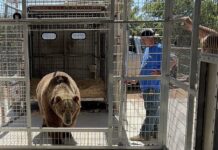 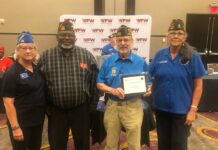 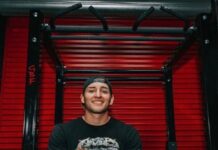 Lesson from a London stage actor to students: Invest in yourself