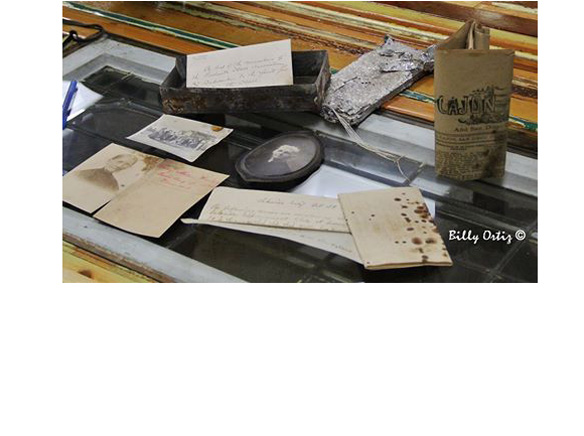 Rachael and Kellon Wolfe, owners of the Lakeside Theater are excited because their workers found a time capsule in a hollowed out place in the walls of the old theater on Maine Avenue, in the heart of Lakeside’s Historic District.

Rachael and Kellon Wolfe, owners of the Lakeside Theater are excited because their workers found a time capsule in a hollowed out place in the walls of the old theater on Maine Avenue, in the heart of Lakeside’s Historic District.

They called the Historical Society to tell them about the discovery. According to Bobbie Pogue, Pennie McMahon and President Susan Brown, they were on duty at the Olde Community Church, home to the Historical Society, when they got the call. They quickly closed up shop and went down to the old theater. That’s when the owners showed them the box of newfound treasures.

There, wrapped in tinfoil and tied with a string was a crusty metal box that contained a folded up newspaper article, dated Oct. 21, 1911 along with some photos. Inside a yellowed envelope was some important information about Lakeside’s history. The newspaper article was published in the El Cajon Valley News.

Kellon Wolfe said that when they were cleaning out the front ticket booth that had glass blocks, one of the workers found the time capsule on July 8. Everyone gathered around the office conference table to unfold the papers that were very brittle and delicate. Besides the newspaper article there were two photos of the Lakeside Improvement Club’s oldest members who were in their 80s and had been born in the 1800s. The envelope contained a list of Club members and a list of Lakeside residents who had donated money to build the new Town Hall, which is what the building was in the beginning, long before it was a theater. The Improvement Club and Woman’s Club of Lakeside (which still exists) had donated the funds of $1,000 to purchase the land for the Town Hall, so they had the honor of doing the ground breaking, the photo showed the ladies in their long dresses and aprons with shovels in hand. The list of donors for the Town Hall included 91 names of citizens and businesses that contributed to the building fund. The ladies also had the honor of bringing the first horse drawn wagon load of sand up from the river bottom, since it was to be a poured concrete construction, a new method back in those days. One rule. Absolutely no intoxicating liquors could be in the Town Hall. The first event planned was a Christmas Ball.

Kellon and Rachael Wolfe gave copies of the newspaper and other documents to the Historical Society, but they plan to put the originals in a framed document holder to hang on their walls for the entire world to see.

In the 1940s the Town Hall was sold to Kersave family and remodeled it to become a movie theater with a stage and first run movies. It remained a movie house for more than 40 years. Kellon Wolfe said that they had found an old Coke machine that they had restored and an old popcorn machine. They have not found anyone who has parts for the popcorn machine, but they are still looking. Another item they found in a wall was a carpenter’s level.

Photographer, Billy Ortiz, and I were invited to take a tour of the Town Hall/Theater. Ortiz snapped a lot of photos while I took notes. Kellon proudly showed us the gutted out theater. He said they were hoping to find a concrete floor but instead found rotten wood floors that had to be taken down to expose dirt. There were two old stages that had to be demolished because of rot. Huge beams can be seen above in the ceiling. Wood sash windows that had been blocked up were exposed. Old wood clapboard was exposed on the backside of the theater.

“I always tried to save the lumber, you’ll never get that type of wood today” Kellon Wolfe said.

They used some of the timbers to build the conference table and other rustic tables in the offices that used to be the Montessori Pre School next door. He added that the homeless people had gotten into the theater and stripped all the copper wire out, but there was still the old knob and tube electrical wiring. They also found raccoons and skunks living in the ceiling spaces. But to their surprise there was no lead paint or asbestos.

As for the future of the building Kellon Wolfe said that he is not in a hurry because he wants the right business to go in, but he does have a tenant for an upstairs space, a business called Guys and Dolls which is a successful business person who gives men a close single edge shave… the old fashion way.

For more photos and a video of the time capsule, visit the Lakeside Historical Society’s Facebook page, created by Ortiz.