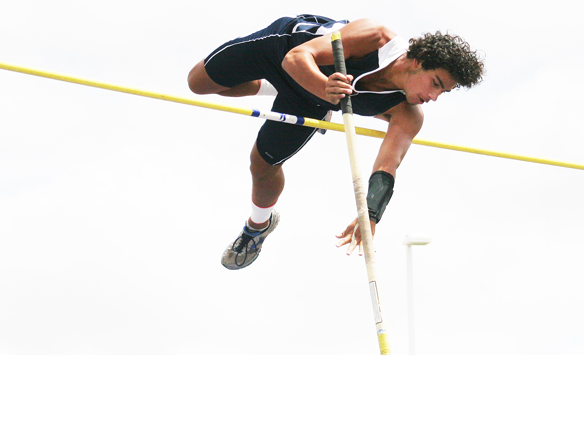 Success at the San Diego Section track and field championship meet can be measured in two ways: high placement in the state qualifying heats and/or high placement on the divisional awards platform. East County student-athletes scored high marks in both areas at last Saturday’s finals at Mt. Carmel High School.

Success at the San Diego Section track and field championship meet can be measured in two ways: high placement in the state qualifying heats and/or high placement on the divisional awards platform. East County student-athletes scored high marks in both areas at last Saturday’s finals at Mt. Carmel High School.

“Both teams—the girls and the boys teams—performed beyond our expectations,” Stathas said matter-of-factly. “We always tell our athletes before each meet not to worry about the other athletes, but just do the best they can—set a seasonal best and the rest will take care of it self as far as the team score goes.

“We have always had a lot of success with this philosophy. We had personal records in nine out of the 19 events we competed in, with three school records. Not bad.”

Steele Canyon racked up a total of three state meet qualifiers and two individual division champions at this year’s CIF finals in the process.

Senior C.J. Morris cleared six feet, nine inches to finish with the section’s top state-qualifying mark in the boys’ high jump while senior Nathan Martinez finished with the section’s No. 2 state-qualifying mark of 14-9 in the boys’ pole vault. Meanwhile, junior Tanjanique Bell placed third in both the girls’ 100-meter hurdles (14.73) and 300-meter hurdles (44.16) to advance.

The top three place-finishers in each event, plus those individuals who met a predetermined standard, qualified to compete in this weekend’s state meet at Buchanan High School in Clovis.

Morris and Hernandez both set school records in their events, as did freshman Carlene Masar in finishing with the fourth-best time of 5:07.00 in the Division I girls 1600-meter run.

Martinez and Bell both placed second among Division I athletes in their respective events.

Morris enters this weekend’s state championship meet ranked fourth in the state in the boys’ high jump. Stathas said the Cougars are also looking for Bell to make the state finals in the 300 hurdles.

Mt. Miguel junior Laulauga Tausaga, a returning state meet qualifier in the shot put and discus throw, set a new section record of 48-3.5 to snare the No. 1 state-qualifying mark in the girls shot put. The record mark surpassed the old section record of 46-10.25 set in 2001 by Sweetwater’s Aiga Maria Taumua.

The Mt. Miguel shot-putter erupted in tears upon setting the new section mark for excellence in the event. She also was in tears after missing the cut for the state meet earlier in the day in the girls’ discus throw with an underachieving mark of 94-7 (well under her best on the season of 156-7).

El Capitan senior Kayden Carpenter placed second in the girls 3200 state qualifying heat in 11:01.47 to earn the Division II gold medal and a trip to Clovis.

Senior Leah Molter will represent Valhalla in the girls 100- and 300-meter hurdles in this weekend’s state meet while VHS sophomore Elizabeth Yocom qualified to compete in the girls’ high jump.

Molter finished second in both state-qualifying heats to Cathedral Catholic junior Dani Johnson, though Molter earned Division I gold medals in both events.

Molter and Johnson produced one of the most memorable finishes at last weekend’s section championship meet. Both runners finished in a virtual dead heat at the finish line with times of 14.00 in the 100 hurdles.

The tiebreaker went to thousandths-of-a-second.

Johnson earned the section’s No. 1 state qualifying berth in the event with a time of 13.991 seconds while Molter placed second in 13.996.

Valhalla coach Garrett Ince called the finish the “event of the meet.”

“It was a photo finish,” Ince said. “It was tremendous. They battled down to the wire.”

Johnson and Molter engineered another dramatic one-two finish in the 300 hurdles, with Johnson recording a winning time of 42.14 and Molter timing 42.55—a difference of 0.41 seconds.

Both times by Molter were personal bests.

This is Molter’s second time qualifying for the state meet after also qualifying last year in the 100 hurdles.

“Leah has worked hard year-round and it’s paying off beautifully,” Ince explained. “She’s continued to improve and impress as the season has gone on. She has put herself in position to become not only a state finalist, but a potential medal-winner.

“While she is very talented, it doesn’t match up to her level of hard work, determination and poise in the big races. As a coach, it’s terrific to see someone like Leah finish her high school career in this fashion.”

This will be Yocom’s first time advancing to the state meet after clearing 5-1. She originally placed fifth in the event but advanced to the state meet when two higher place-finishers scratched from attending this weekend’s state meet.

Ince called Yocom “one of the bright spots for the future of Valhalla track and field.”

“As a sophomore, she’s gaining terrific big-meet experience, which is sure to help her in the future,” Ince noted. “Despite her success, I really feel like Elizabeth still has a lot of room for growth in the high jump.”

Yocom’s personal best in the high jump is 5-2.

Helix will be represented at the state meet in the boys’ 4×100 relay, boys 400-meter dash and girls long jump.

The Highlanders recorded the top time in the section in the 4×100 relay in 42.02, inclusive of both divisions. All four runners on the Division I Helix championship team are juniors: Michael Austin, Mason Vineyard, Nate Stinson and Mekhi Stevenson.

Vineyard went on to grab the No. 3 state qualifying time of 14.91 in the boys 110-meter high hurdles. He edged Steele Canyon’s Bryce Johnson (14.97) by 0.06 seconds to nab the section’s final state qualifying berth in the event.

Vineyard wasn’t quite finished on the afternoon. He timed 10.92 in the B-heat in the boys 100-meter dash to place second among Division I sprinters.

The 97th annual state meet starts Friday with preliminary qualifying and ends Saturday with championship finals in each event.

Could Padres just possibly be heading to MLB postseason?