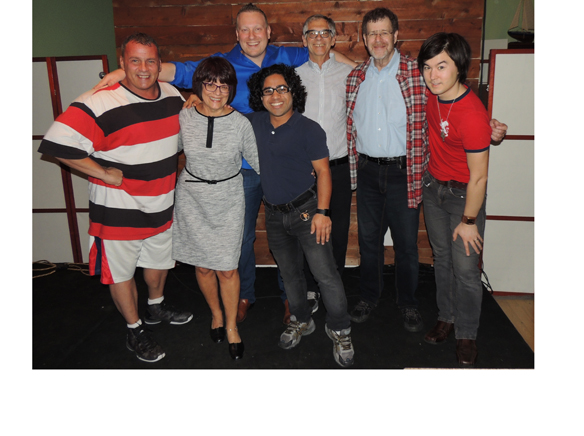 Something funny is happening in La Mesa once a month at SPACEBAR Café in La Mesa. The Internet café hosts a monthly night of music and comedy. Ten dollars gets you admission to the show and includes a free beer or wine, no drink minimum or donations expected. This month on November 13, Gene Levin was the host of the show.

Something funny is happening in La Mesa once a month at SPACEBAR Café in La Mesa. The Internet café hosts a monthly night of music and comedy. Ten dollars gets you admission to the show and includes a free beer or wine, no drink minimum or donations expected. This month on November 13, Gene Levin was the host of the show.

The night was tagged as one of “clean comedy,” so my husband and I were looking forward to a refreshing change from crude comedy we have cringed under.  We settled into a table towards the front of the café and ordered Warm Spinach and Artichoke Dip as an appetizer and Chicken Pesto Sandwiches with Parmesan Fries as our entrée.

As we ate our food, Levin introduced Masashi Nakamura as the musician for the evening.

“I found Masashi playing at several Open Mics around San Diego, and I just had to ask him to open our night,” Levin told the guests who had started arriving.

Masashi Nakamura played the guitar and sang songs, many of which he wrote.  When he sang and played a rapid-fire song in Japanese, guests stopped eating and talking to listen to him. Everyone applauded loudly when he finished it.

“That was a song that was difficult enough for me, since I don’t really speak much Japanese anymore, but on top of that, it’s full of tongue-twisters,” Nakamura said.

While Nakamura played soft rock and easy-listening music, more people came in, seating themselves at tables of two and four and ordering something to eat and a glass of wine.

At 8 o’clock, Nakamura wrapped up his music and it was time for Levin to start the laughs. He told some of his own jokes, which focused on the funny aspects of growing older. Marc Nadeau, a French-Canadian, was boisterous and bold approaching the topics of body-types and bikinis and tales from the gym.

Next up was Toni Torquato, a petite woman who identified herself with the baby boomer generation. She regaled the guests with quips and tips on how to survive middle age. She joked about the dating life, buying cremation plans, and nostalgia of the good old days. All of the women, from their 20s to 60s, laughed with Torquato at her tales of men in so little time.

Curly-haired Simon Blackthorn, calling himself a retired scientist, brought a lot of laughs from the people, too. His jokes were heady, some of them about evolutionists and creationists. He also poked light-hearted fun at his own Jewish heritage.

Manish Gupta, who is from Mumbai, India, entertained the audience with stories of his getting used to American ways and conversation. He also poked fun at his own short stature. Everyone laughed when he said he thought that it was odd that people are fine with the greeting, “Have a nice day,” but get all uptight if they are greeted with, “Have a nice life.”

Jim Hayes was the last comedian of the evening. He took command of the stage, walking back and forth and gesturing expansively with his hands. He mimicked the conversations that people had with him when they find out that he is a male nurse. Some of his accounts were graphic enough that they made people blush, hands over their mouths. But his smile and good nature won everyone over.

Doing standup comedy has got to be one of the most difficult ventures for anyone to try. Standing in front of people and telling jokes has as much to do with timing, facial expressions, body language and gestures as it does with the material. All six of these comedians deserve stars for giving it a go. Many of them have taken classes with locally well-known comedian Tony Calabrese.

Overall, my husband and I enjoyed the evening. Yes, there were very few f-bombs that the comedians dropped, which was good, but we felt uneasy about many of the sex jokes, as did many others in the audience.

Being able to read an audience and toe the delicate line of discomfort and delight takes practice. And I, for one, along with my husband, will come back to SPACEBAR Café to give these comedians the support they need. By the way, the food at the café is thumbs-up.

SPACEBAR Café is located at 7454 University Avenue in La Mesa. For more information about their hours and events, go to www.atspacebar.com or call 619-461-7100.

Standing behind our Middle Eastern population