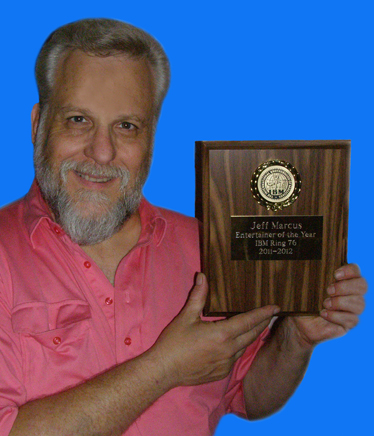 Just as Comic-Con was winding down, a whole slew of magical characters met at sundown at the New Century Buffet in El Cajon. It was the annual gathering for members of Ring 76 of the Brotherhood of Magicians to install the club’s new board of directors and to hand out awards.

Just as Comic-Con was winding down, a whole slew of magical characters met at sundown at the New Century Buffet in El Cajon. It was the annual gathering for members of Ring 76 of the Brotherhood of Magicians to install the club’s new board of directors and to hand out awards.

Santee resident Jeff Marcus was busy introducing the new officers and handing out awards. He was completely taken aback when Ring 76 vice president Syd Segal announced that Marcus had won the Entertainer of the Year award.
“I was very honored to be chosen this year,” said Marcus, who is also the Territorial Vice President of Southern California of the International Brotherhood of Magicians.

When Marcus moved to San Diego in 1974, he joined Ring 76, the local IBM chapter. He continues to be one of the most faithful in attending the monthly meetings. During those meetings, the local magicians are invited to perform a short magical act. Marcus nearly always performs at each invitation.
This year, when the votes by attendees for best performer were tallied, Marcus had the highest count. Part of a good magic act, Marcus says, is to include humor.

“In fact, it’s the only real thread through all of the types of shows I do. There is always quite a lot of comedy in them,” Marcus said.
Most of the time, the comedy is pre-planned. Sometimes, however, humor comes unexpectedly. For example, when Marcus performs at shows with lots of children in the audience, he produces a live rabbit as a surprise. The rabbit has red eyes, like most rabbits do, and children often ask Marcus why. He usually answers “because he’s a red-eyed rabbit,” in turn asking why the kid has his own color of eyes. Usually, the kid just shrugs the answer away.
However, at a recent show for kids, when Marcus asked a 3-year-old why he had brown eyes, the kid stood up and exclaimed, “Because I’m a brown eyed human!”

Marcus performs “stand-up” magic as one would see on stage and “close-up” magic as often seen in a restaurant or bar with small groups of people.

“I also do a hypnosis show, and that is like another world from magic, since the volunteers are the stars of the show—not me!” Marcus said.

But going to Ring 76 meetings is one way Marcus assures that he stays up-to-date with the craft. While some members come to be entertained by other members, others join to learn. The club encourages hobbyists and amateurs to perform.
Being the best performer one can be is often the best mark of a successful magician. That requires a lot of time and practice on the craft as well as a talent for producing the “oooohhh” and “aaaahhh” factor.
One of Marcus’s favorite tricks he does involves a deck of cards. A signed card remains buried in the middle of the deck yet keeps jumping up to the top. “That effect always gets a huge reaction. It was probably the routine that helped me win the International Brotherhood of Magician’s Strolling Olympics when I competed in Reno, Nevada,” he said.

Join the La Mesa Chamber for their second breakfast meeting of...