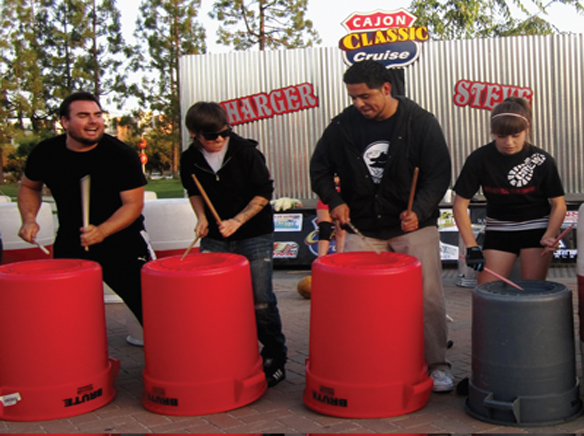 The Junior Crew from Rubio’s Performing and Dance Studio, which recently relocated to 237 East Main St. in downtown El Cajon, is a regular performer at Classic Car Cruise and other events in East County. With the first resounding boom of the young percussionists, everyone crowds around to watch and hear.

The Junior Crew from Rubio’s Performing and Dance Studio, which recently relocated to 237 East Main St. in downtown El Cajon, is a regular performer at Classic Car Cruise and other events in East County. With the first resounding boom of the young percussionists, everyone crowds around to watch and hear.

People are always surprised and amused to find that the racket the drummers make is actually from beating wooden sticks on upturned buckets. It’s East County’s own spin-off of STOMP. Chris Rubio, owner and founder of Rubio’s Dance Studio, admitted that from the first time he saw STOMP in 1996 with his father, he dedicated himself to the “art of becoming a stomper.”

Because a STOMPer had to be at least 18 years old to audition, Rubio had to wait a few years. But he used the time to create his own Crew, a STOMP-like group that performs its own percussion act on everyday objects. By 2001, the studio was open. One year later, STOMP was having auditions in Boston, so Rubio flew out to give it a try. He was given a part in that performance and later was cast in the New York STOMP. Rubio had the time of his life for the next several years. He wanted to be able to give that experience to others.
Rubio had already formed an adult crew; now, it was time to start the Junior Crew.
Over the last 10 years, Junior Crew became almost more popular than the Adult Crew, “because you’re seeing young kids rock out,” Rubio said.

Today, the Junior Crew has grown to three different teams consisting of 20 performers in each group. Junior Crew Red has five to 10-year-olds; Junior Crew Grey team, 11- to 14-year-olds. The Junior Crew Black team is made of 15- to 18-year-olds.
The whole family has come on board with Rubio.
“From the time we were young, my siblings and I loved being on stage, whether it was to sing, dance, act or play instruments. Performing was a big part of our lives,” Rubio said.

So opening a performing arts center was the natural outcome of all that. Chris Rubio’s parents Ignacio and Yvonne Rubio manage the Arms Wide Open and Crew and Junior Crew teams. His sister Crystal is the secretary for RPA offices. Another sister, Nancy, is a head dance instructor, who is currently performing with STOMP.
Due to the popularity of programs at Rubio’s, the company had to move. “The new facility is amazing with multiple dance rooms and music rooms,” Rubio said.

Room for growth is exactly what the family of CREW needs, as they are regular performers all over San Diego at various community and corporate events as well as theme parks. Then, in 1999, the Rubio’s decided to have CREW perform in schools delivering positive messages to youth.
“Crew messages include Healthy Choice, living a drug-free life, no bullying, rest before a test,” Rubio said.
The vigorous beating out of positive energy on buckets and other objects has a lot of appeal to the teens at Rubio’s. Cade Slattery, a member of Junior Crew for six years, claims that being in Junior Crew is life-changing. He says that he’s learned a lot about music since that is the entertainment part of the group.
“But the … purpose of the group is the drug-free message that is constantly emitted in all of the performances we do,” Slattery said.