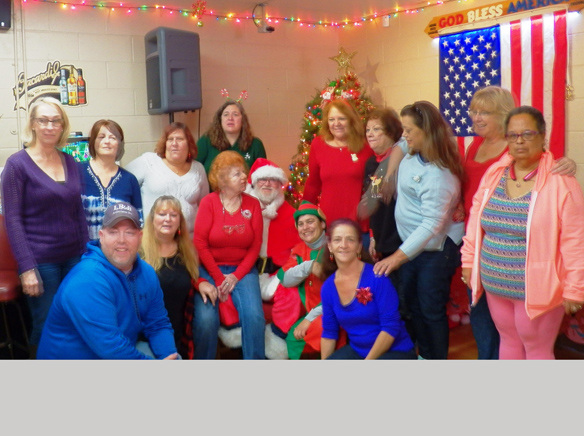 Auxiliary sisters associated with Santee’s Veterans of Foreign Wars Post 9327 proved they are adept at spreading holiday cheer for East County children in military families by bringing Santa Claus out for an early visit on the morning of Saturday, Dec. 10.

Auxiliary sisters associated with Santee’s Veterans of Foreign Wars Post 9327 proved they are adept at spreading holiday cheer for East County children in military families by bringing Santa Claus out for an early visit on the morning of Saturday, Dec. 10.

Fifteen kids received presents at a breakfast children’s Christmas party featuring Santa handing out the gifts as the youngsters fun holiday activities. The children also had the opportunity to make hand-decorated cards for military service members and veterans at the La Jolla Veterans Administration hospital.

The party was held at the Eagles clubhouse at 9317 Shadow Hill Road.

Members of the Santee VFW, the companion VFW Auxiliary and the co-located American Legion Post 364 have been homeless for a little over a year, meeting at the Santee Eagles facility on a temporary basis.

But military veterans and their family members know how to make do, how to make the most of difficult times and circumstances. These Santee veteran service organizations have acquired a property and are currently engaged in remodeling the two-suite complex into their new post home.

Marjorie Dege, treasurer for the Santee VFW Auxiliary for three years, described the exciting plans the groups have to make next year’s children’s Christmas party bigger, better and of service to even more military families in East County.

“We are going to be reaching out more to the community,” Dege began. “We tend to be self-sufficient, but we want to have more involvement within and from the area. Next year we will be reaching out to local enlisted personnel and their children once we are settled at our new location.”

Dege continued, “We want to help more and to make this more of a community event. We plan to step up our fundraising when we are at the new place.”

Another project in the offing is a food pantry targeted to the elderly, the poor and any others at risk of going hungry. “We really want to help the community more and to receive more donations so we can better provide that help,” Dege said.

She emphasized that the Eagles members have been wonderful hosts for the interim. “But we can do so much more when we have our own place,” she concluded.

Karen Watts-Walker, president of the Santee VFW Auxiliary, concurred. “We are going to be in a good place. We are managing the contractor work to get into our new facility as soon as we can. I have an awesome auxiliary where everybody pitched in and did a wonderful job for the kids for this Christmas party. This was a beautiful turnout. I have the best girls in my auxiliary. And four of the guys helped with setting this up for the kids too.”

Eugene Michonski, commander of Santee American Legion Post 364, was one of those guy helpers. He commented on the holiday party’s events saying, “We enjoy doing this for the children and grandchildren of veterans. And later today I’ll take the Christmas cards over to the VA hospital. The veterans there will really appreciate the kids wishing them a special merry Christmas.”

The VFW and American Legion groups plan to move to their new facility early in the new year, and they invite the public to meals and other gatherings. Dinners are served each Friday night from 6 to 7:30 p.m. Hearty Sunday breakfasts are available, 8:30 to 11 a.m. Local vocalists can help provide entertainment at karaoke parties on Friday and Sunday.

Day on the bay celebrates life for Sharp HospiceCare