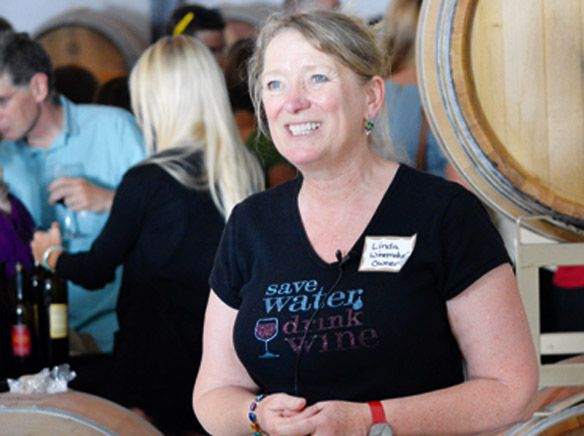 La Mesa has its first winery production facility, with the dream of La Mesa couple Linda and Mike McWilliams and a lot of help from the City of La Mesa.

Over the weekend, San Pasqual Winery, originally from Pacific Beach, celebrated its grand opening with a two-day event that drew in more than 400 people to taste the red, white, passion fruit and dessert wines.

La Mesa has its first winery production facility, with the dream of La Mesa couple Linda and Mike McWilliams and a lot of help from the City of La Mesa.

Over the weekend, San Pasqual Winery, originally from Pacific Beach, celebrated its grand opening with a two-day event that drew in more than 400 people to taste the red, white, passion fruit and dessert wines.

Linda McWilliams, said her husband is the business and mechanics brains and she is the wine—maker that is. Along with her husband and co-owner, they bought an urban winery located in Pacific Beach in February 2009. She said the business has been growing and making wine in less than 1,400 square feet became more challenging.

Expanding into La Mesa already in December 2009 with the San Pasqual Winery Tasting Room & Gallery, she said it was a wanted and natural move when they had the chance to move the wine making facility to their home of nearly 30 years.

“We live in La Mesa and I have friends that are growing grapes here and there is more and more good fruits from this area and we decided we wanted our winery right here at home,” she said. “The City of La Mesa has been wonderful. We have had great encouragement from the mayor, the city planning commission and the city council because we had to wait for an ordinance change.”

It took a year to get all the permits because the old city ordinance prohibited the fermentation fruit products. La Mesa City Council cleared that in December, the McWilliams’ applied paperwork in January and received the final ABC clearance from the state a week ago.

Mike McWilliams said the main point of the event was to celebrate its grand opening with its wine club members.

“We have about 200 and with our members we have quarterly wine tasting events but in the past have had to limit the number of people due to lack of space,” he said. “At the Tasting Room we could only hold about 75 people and this is really special because we could finally open it up so they all could come.”

He said they also wanted to open it up to the public to let them know the new location to celebrate the dedication of the staff of three full-time and three part-time employees. Living less than six minutes away and in many ways the grand opening celebration became a community event, he said.

“One thing that has been neat is this is kind of known as the industrial center of La Mesa and all of our new neighbors have been great,” he said. “The awnings out front were made by a company across the street, the sign made across the street, the furniture was done by the used furniture place around the corner so its been a neighborhood project to put all this together.”

Wine club members can sign up at the Tasting Room or online.

For information on wine tasting hours at both La Mesa facilities, how to join the club members and the variety of wines San Pasqual produces go to www.sanpasqualwinery.com.