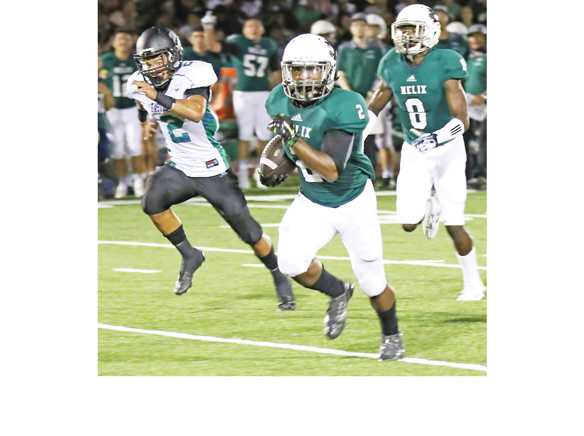 The 2015 San Diego Section football playoffs kick off Friday, Nov. 13. The section seeding committee has made two East County teams favorites to win their respective divisions: the Helix Highlanders in the eight-team elite Open Division and the Valhalla Norsemen in the 12-team Division II bracket.

The 2015 San Diego Section football playoffs kick off Friday, Nov. 13. The section seeding committee has made two East County teams favorites to win their respective divisions: the Helix Highlanders in the eight-team elite Open Division and the Valhalla Norsemen in the 12-team Division II bracket.

All four teams will open the division playoffs in the quarterfinal round on Nov. 20.

The Open Division championship game is scheduled Dec. 5 at 7 p.m. at Southwestern College.

Madison is coming off a 64-7 victory at Mission Bay to claim this year’s City Conference-Western League championship.

Helix and Madison have not met this season, though their impending clash could provide blockbuster highlights.

The Highlanders, who surrendered a lead in absorbing a loss to Oceanside in last year’s Open Division title game, are riding an eight-game winning streak while the Warhawks have won their last six games.

The bottom half of the Open Division playoff bracket includes second-seeded St. Augustine (8-2) against seventh-seeded Eastlake (5-5) in one semifinal pairing and sixth-seeded La Costa Canyon (7-3) at third-seeded Mission Hills (10-0) in the other semifinal match-up.

All four Open Division semifinals will be played Nov. 20.

Highlander signal-caller Michael Austin has completed 53 percent of his passes for 1,098 yards with 12 touchdowns and four interceptions for a 103.1 quarterback rating. He’s also rushed for 236 yards and scored five rushing touchdowns.

Nathen Stinson leads the Scotties with 1,117 rushing yards and 23 touchdowns while Mekhi Stevenson tops the team’s receivers with 23 catches for 558 yards and eight touchdowns.

Madison quarterback Terrell Carter has thrown for 1,441 yards and 21 touchdowns while Brandon Lewis has 26 catches for 500 yards and 10 touchdowns.

Erick Buchanan remains the Warhawks’ big threat with 968 rushing yards and 16 rushing touchdowns; he also has five catches for 93 yards and one score.

Grossmont (7-3) will host Friday’s first-round winner between seventh-seeded Steele Canyon (6-4) and 10th-seeded Vista (4-6). The Foothillers, who enter the playoffs having dropped three of their final four regular season games, have to be a bit wary if they draw Steele Canyon in the quarterfinals after the Cougars won a high-scoring shootout, 39-38, at Grossmont on Oct. 16.

On the other hand, the Foothillers also will be motivated to make amends for that loss.

Grossmont is led by junior quarterback Hunter Gaines, who has thrown for 2,104 yards with 22 touchdowns (with nine interceptions), and senior running back Jake Haar, who has rushed for 768 yards and four touchdowns.

Senior Khaleed Davis has caught 57 passes for 916 yards and 13 touchdowns. Davis leads the team with 15 total touchdowns, including two scores on punt returns.

El Capitan (2-8) received the No. 12 seed in the division and will play at fifth-seeded Poway (5-5) in Friday’s opening round. The Vaqueros – Division II champions in 2014 – have undergone a rebuilding year in 2015. In fact, one of the team’s victories this season is by forfeit.

El Cap quarterback Phoenix Cates has passed for 963 yards but with only three touchdowns against 15 picks.

Oceanside, last year’s Open Division champion, is the No. 1 seed in Division I this season. The Pirates enter the playoffs 6-4. El Camino (5-5) is seeded third in the division while Point Loma (7-3) is seeded fourth.

The Poway-El Capitan winner will play at Point Loma on Nov. 20.

Valhalla (8-2) finished runner-up to Helix in this year’s Grossmont Hills League standings and will be making a bid to return to the section championships after recording a runner-up finish to Cathedral Catholic in the Division III final in 2008.

The Norsemen, who have won eight of their last nine games (with the lone loss being to Helix), will play either eighth-seeded Christian (7-3) or ninth-seeded West Hills (5-5) in the quarterfinals on Nov. 20.

Rahshaun Sharpe leads the Norsemen with 602 yards and nine touchdowns while quarterback Phillip Naseh has passed for 1,563 yards and 14 touchdowns.

Christian will host West Hills in the teams’ first-round encounter on Friday, Nov. 13.

Senior quarterback Spencer Moyer has thrown for 1,426 yards with 16 touchdowns and six interceptions. He also leads the Wolf Pack with 696 rushing yards and five touchdowns.

Taj Broomfield leads the team with 11 total touchdowns. He has 33 catches for 467 yards and six TDs while rushing 41 times for 466 yards and three scores. He’s also scored on a fumble return and kick-off return.

Christian lost in the opening round of last year’s state playoffs and its senior-laden lineup appears fine-tuned to renew the quest this season.

Senior quarterback David Todd Jeremiah has thrown for 2,546 yards with 26 touchdowns and nine interceptions for a 112.1 quarterback rating.

Senior Adrian Petty has rushed for 828 yards and eight touchdowns while senior Nick Sexton has amassed 1,293 receiving yards and 13 touchdowns. Sexton has also scored a rushing touchdown and a touchdown on a kick-off return.

Granite Hills (9-1) won its first league title since 1988 and is enjoying a season of plenty. The Eagles finished 4-0 in league play and have won their last eight games.

Granite Hills will host either sixth-seeded Otay Ranch (5-5) or 11th-seeded Brawley (6-4) in the quarterfinals.

Team leaders for the Eagles include senior Thomas Youmog with 1,104 rushing yards and 14 rushing touchdowns and senior Kellen Gaier with 90 total tackles.

Sophomore quarterback Jacob Siegfried has passed for 532 yards with five touchdowns and seven picks but has also rushed for 432 yards and scored five rushing touchdowns.

The visitors amassed 447 rushing yards and ransacked the Sultans with six sacks and two interceptions.

The El Cajon Valley-Kearny winner will play at top-seeded Mater Dei Catholic (9-1) in the quarterfinals while the Santana-Central Union winner will draw second-seeded University City (8-2).

Defending division champion Bishop’s (6-4) will host the Monte Vista-Castle Park winner in next Friday’s quarterfinals. The Knights are seeded third in the division this year.

Senior quarterback Frankie Gutierrez makes the Santana offense go. He has passed for 1,827 passing yards and 21 touchdowns and also rushed for 365 yards and scored 15 rushing touchdowns for a 111.4 quarterback rating.

El Cajon Valley is paced offensively by senior Nathan McCullough, who has rushed for 1,410 yards and scored 15 touchdowns.