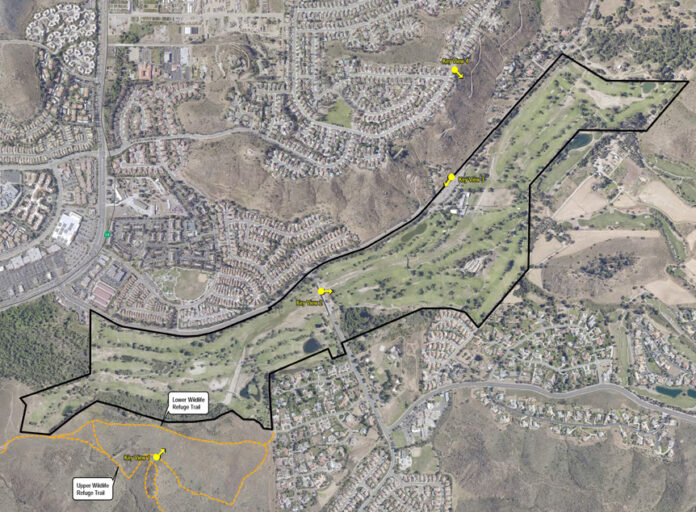 The County held a virtual presentation of the Draft Environmental Impact Report for the Cottonwood Sand Mining Project on Jan. 19. More than 300 people attended the English version and in tandem, the county held the presentation in Spanish and Arabic. During the three hour meeting, not one person spoke in favor of the project. Major concerns voiced by participants were the fact that the project is in the middle of residential neighborhoods, local schools, traffic impacts, noise pollution, air quality, hazardous materials, water use, wildfires, and tribal culture disturbance.

The Cottonwood Sand Mining Project proposes the conversion of the existing Cottonwood Golf Club golf courses to a ten-year sand mining operation with an additional two-year reclamation period. Approximately 214.4 acres of the approximately 280-acre site are proposed for extractive use which would occur in a total of four phases. Cottonwood Golf Club, located on Willow Glen Drive within Rancho San Diego in unincorporated El Cajon, was purchased by Michael Schlesinger in 2018 through his company, New West Investment Group, Inc., located in El Cajon.

Planning and Development Services Deputy Director Mark Slovick said its role is to evaluate the environmental impacts and make recommendations for the Major Use Permit needed to move the project forward.

“Through this EIR process, we disclose those impacts to the environment, explain those issues to the community, get your feedback,” he said. “After we get comments on the EIR, staff will review those, give written responses that will be included in the final EIR.”

Stop Cottonwood Sand Mine board member Barry Jantz said it is essential for the County to find a way to have in-person meetings regarding the DIER, as more people will turn out for a public meeting. He said the organization is in the process of creating a formal written response of the DIER.

“It has been determined that the DIER is a flawed, incomplete document that does not adequately analyze the significant environmental impact of the potential project to the people, wildlife, water, air, roads,” he said. “Additionally, the sand mining project does not propose adequate mitigation measures or alternatives to address those impacts.”

Jantz said the DIER does not comply with applicable goals, policies, or requirements of the San Diego County General Plan or the Valle De Oro Community Plan. He said its findings is that the DIER is incomplete and not in compliance with the California Environmental Quality Act.

Jantz said the DIER drastically minimizes impacts including valley fever, glosses over air quality, vehicle miles traveled and greenhouse gas emissions, impact to private water wells and ground water near the properties onsite and surrounding the project area, the impact to the Sweetwater watershed, how sand mining activities will destroy and not restore wildlife habitats.

“The DIER should be rejected as it does not properly address distances from homes and other aspects of the San Diego region aggregate supply study findings of which the developer was involved as part of the expert review panel,” he said.

“Along the Sweetwater River, it is the only missing piece of the river in the National Wildlife Refuge that has two parcels directly adjacent,” she said. “Conservation of this parcel would complete a mile-long corridor that would be tremendously valuable habitat for birds and other (endangered) wildlife. In Audubon’s opinion, the best plan for the site would be to restore the golf course directly to its native vegetation without doing the sand mining project. San Diego Audubon would be an enthusiastic partner in helping to find state and federal money to compensate the owner in order to make this happen.”

Former Fish and Wildlife commissioner and Spring Valley Planning Group member Scott Shaffer said the planning group voted against the project due to the project’s environmental impacts, even though the project is not in its planning area.

“The project has potential for increased traffic congestion on Jamacha Boulevard/State Route 94 cause by frequent sand truck trips throughout the week,” he said. “The additional noise of this project on adjacent roads and project trucks damage local roads and are significant factors that could harm local communities for years to come.”

Shaffer said evacuated pits from the mine would result in environmental impacts to wildlife, erosion to the Sweetwater River affecting water quality downstream, operational noise, and other environmental concerns.

Cyndi Derry said a 2011 SANDAG report that this DIER was based on was written with EnviroMINE, Inc., a mining consultant, and is not a neutral party in this process.

“It is written by the fox that is guarding the henhouse,” she said.

The Water Conservation Garden Education Manager Jillian Quint said her primary concern is for the thousands of preschools, elementary, and high school students who visits her site, less than a mile from the project site.

“Students come to us to see the beauty of East County, get outdoors and experience nature,” she said. “What will these students encounter if this project is approved? I am trying to grapple with this as an educator. How will I justify and explain this to our young people that potentially our entire community could fail in protecting the air and watershed in this area?”

Alex DeNoble said he could not believe there was a discussion being held about having a sand mining operation in the middle of a residential district.

“It is awful,” he said. “I listen to your environmental report. With the carcinogens that are in the air that could come from this, and hear you say to us that it is insignificant and below thresholds is really an insult. You have not heard one person tonight in favor of this proposal.”

Mr. Elliott said that he and his wife were from local reservations and that the land is unseated Kumeyaay territory. He said a majority the mitigation findings at the site are considered less than insignificant. He said in finding potential cultural artifacts, he believed that there was no check and balance system in place.

Elliott said this has been the same case across several projects in the county, and the results are always the same.

“Cottonwood Sand Mine. Are you listening? If you build there you have good potential to find human remains due to the flood plain you are in,” he said.

Slovick said he hopes that the final EIR will be completed by the end of the year, going through another round of review before heading to the San Diego County Board of Supervisors for approval.

DEIR documents can be reviewed on the County’s website at www.sandiegocounty.gov/pds/ceqa/MUP-18-023.html. DEIR documents can also be reviewed at the Rancho San Diego Library located at 11555 Via Rancho San Diego, El Cajon, and the Casa de Oro Library, at 9805 Campo Road, #180, Spring Valley. The public review period has been extended to end on Feb. 28. Comments on the DEIR must be received by the County no later than Feb. 28, 2022, at 4 p.m. Comments on the DEIR must be sent to Robert Hingtgen, Planning & Development Services, 5510 Overland Avenue, Suite 310, San Diego, CA 92123 or emailed to Robert.Hingtgen@sdcounty.ca.gov.

Janis Ian performing at The Magnolia