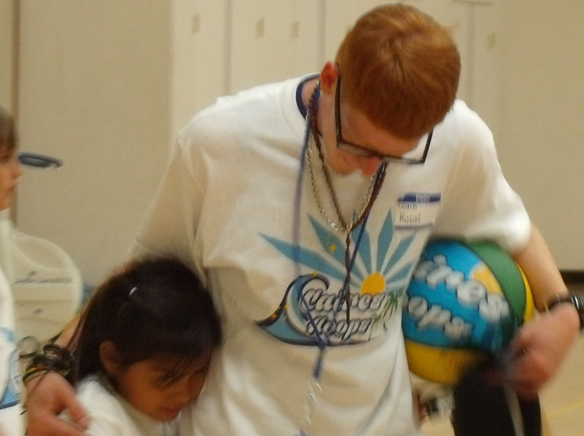 It is a saying that you would expect to hear from Greg Popovich, head coach of the world champion San Antonio Spurs as they embarrassed LeBron James and the Miami Heat. These words however, will not be found in an NBA locker room, but on a white board in the middle of Grossmont College’s gym, for the 4th annual Caires Hoops Youth Basketball Camp.

It is a saying that you would expect to hear from Greg Popovich, head coach of the world champion San Antonio Spurs as they embarrassed LeBron James and the Miami Heat. These words however, will not be found in an NBA locker room, but on a white board in the middle of Grossmont College’s gym, for the 4th annual Caires Hoops Youth Basketball Camp.

Women’s head coach for Grossmont, Karen Caires, hosted a four day camp for ages 7-15, to teach the game she loves to a new generation of basketball lovers.

“One of the biggest things with coming to Grossmont College was at some point doing outreach to the community and give back,” she said. “That’s what this camp does. We have a lot of teaching, a lot of fun. We’re giving them good habits at an early age and it is going to carry them in the future.”

This is not just one coach trying to teach a room full of kids by herself however, she enlists the help of her own team.

Darin Curtis, a father of four brought his daughter McKenzie, 11, to Caires camp for years now. He said his oldest daughter played for Caires and that he believes this camp has helped McKenzie tremendously.

“Absolutely,” he said. “What’s neat about this camp is the coaches are the players themselves. My daughter comes to watch them play during the season and then gets a chance to go to camp to interact and be coached by them. It’s a family.”

Curtis said what separates Caires from other coaches, is her passion for the kids.

“She has a balance of love for the game and intensity about wanting to teach it to others,” he said. “Sometimes coaches get too caught up in winning and she’s all about teaching the game at any level, whether it’s my daughter who played for her at an elite level or little boys and girls just starting out.”

There is only so much that can sink in during one week of camp. Campers may not remember all of the terminology or techniques, but Curtis said that getting his kids involved in sports early, gives them so much more.

“It’s fundamentally one of the most important things,” he said. “They learn how to be a part of a team, how to give and take to accomplish personal and team goals. It teaches them life- long skills, like how to win and lose and how to overcome obstacles. It builds their character.”

Abbie Vargas, 18, is a sophomore at Grossmont College. This was her first time coaching for this camp and she said she loved it.

“It’s so cool,” she said. “I think I’m going to learn so much more from them than they do from me. They are teaching me to have more fun while playing. I’m really competitive and don’t really understand the whole fun thing but they don’t have a care in the world. They just want to play basketball.”

One of those campers is Madeline Meyers, 11. She attends Our Lady of Grace Catholic School in El Cajon, where Caires children go and where most of the campers were from this year. Meyers said it was her first time attending camp, but that coach Caires has been great.

“When I saw how much better my sister got in a couple of hours, I wanted to come,” she said. “She’s super nice and funny, she really helps a lot. It feels like she focuses on everyone, not just a few people.”

The campers are not the only ones who pick up a thing or two from Caires. Grossmont freshman and coach for this camp, Dominique Morrison, 18, said that she’s learning too even when the focus is on the kids.

“She’s a really good teacher,” she said. So then we have to go teach them and it helps us too. A lot of their mistakes are our mistakes too.”

Another Grossmont freshman and player-coach, Aaron Rosas, 19, said he does it for the kids.

“I like to see kids get involved at a young age,” he said. “I feel like the younger they are the more they like it. Just over the last two days I’ve seen a lot of improvement in them.”

With about six campers per coach, players really got to spend individual time helping kids. This however, is just the beginning said Caires.

“The goal at this point is to reach out further,” she said. “It’s life lessons. It’s more than just basketball.”

Caires said that the date for next year’s summer camp will begin on June 22, 2015, so plan your vacations around it, she said.

Caires also said that this fall, her team would feature a camp night during the basketball season where kids who attended the summer camp can get into the game for free. That game will be November 21st, 2014, against Citrus College. Caires said that anyone who brought a copy of this article would get in for free too.

With a team of committed and caring players, Caires has created the foundation for a camp that hopes to teach the game of basketball to even more generations to come.

Send off celebration for 12 Special Olympic athletes heading to 2017...