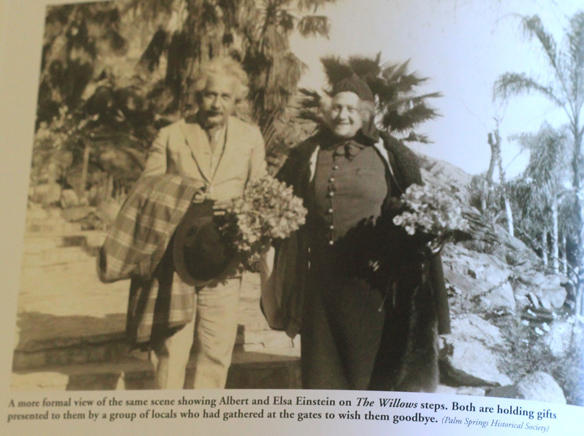 “Occupied,” pops up the cyber answer after I check the availability for Albert Einstein’s Garden Room at The Willow, a bed and breakfast villa in Palm Springs, CA. The soonest I can book it is in September. My birthday is sooner than that and I ran away from home, driving at random and picking up whatever place sounds exotic enough for me to stop by and explore.

“Occupied,” pops up the cyber answer after I check the availability for Albert Einstein’s Garden Room at The Willow, a bed and breakfast villa in Palm Springs, CA. The soonest I can book it is in September. My birthday is sooner than that and I ran away from home, driving at random and picking up whatever place sounds exotic enough for me to stop by and explore. For a whooping $565 per night, I could delight in sleeping in the same bed as Einstein and his wife, Elsa, did in the mid’ 1930’s when the greatest savant of all times stayed here multiple times, invited by his friend, Samuel Untermyer. I didn’t hear about anybody coming out of this room reinventing the wheel, therefore I don’t hold high hopes either that Einstein’s spirit still walking on these willowy paths may influence me more than to remember that E=mc2. I see that other rooms rent for close to $800 and wonder why isn’t Einstein’s room as pricey?

I follow the map to a reclusive street on the outskirt of the city, adorned by rich bougainvillea and weeping trees, elaborated iron gates and Spanish-style architectural wonders resting on cobblestone pavements. Hidden in the shadows of a luxurious garden, there it is, The Willow. It looks like one, so suavely lying on lush terraced land and I had to ring the bell to have the property manager come to the gate and let me in.
I struggle to park in the very tight-curbed front yard, exchanging cordial gestures with another guest arriving in a convertible Porsche Boxster, who I just happened to block. I let him go first. The property manager welcomes him first also.  A grey haired gentleman joined by a young brunette and we later exchange frivolous pleasantries about the mahogany beams in the living room and oh-ing about the “oh, so exquisitely delicious” hors d’oeuvres and fine wines served every day, on top of the three course gourmet breakfast for two. I make a mental note to ask the butler about that.

The brunette has a crutch and I have a crutch. We both struggle up the stairs to the lobby, as there is no elevator. The steps are covered in brightly painted ceramic tiles, a flagrant contrast with the very subtle nuances that dominate the rest of the exteriors. She wears a flowery backless dress touching her ankles and she stumbles on it as her partner gallantly offers his arm for support. Soon, a glass of wine in hand, they disappear on the path toward the secret garden reserved for paying guests only. I try to notice if there are other residents inside this very quiet villa, as it is listed as completely occupied, but maybe they are cooling of at the pool or about town, browsing by foot the chic boutiques or upscale restaurants abundant in Palm Springs. The property manager is all smiles and eagerness to guess our wishes even before they arise as she leads us to the main hallway.

I decide to rest on one of the plush sofas and take it all in, Art Deco and period furniture, silver and fine China, painted ceilings and heavy wrought iron candelabras, looking at the glass tables throughout the place and trying to figure out if the wall to wall armoire on the patio is made out of inlaid wood or what and how old is it? It’s beautiful. I am trapped in between feelings of “awe” (due to great expectations and the fact that an amazing human felt like home around here) and a somewhat of a frustration at the explicit pomposity of this place, which becomes overbearing in no time. There is too much of too little. Good taste eclipsed by lots of shines and affected elegance. I catch a glimpse of the claw foot slipper bathtub in Einstein’s room and come to terms with the fact that ultimately, this is now just a profit-oriented upscale bed and breakfast open for everybody who can afford it and not anymore a place of legends heavy with the charm of intellectual debates echoed by the evening music programs performed at that grand piano by the double French doors in the main room. No more ladies wearing silk stockings, no more gentlemen taking their hats off while greeting them.
I go out on the balcony where perhaps Einstein lounged decades ago and try to imagine how does it feel like to have a brain like his. Did he see round where there was a square and depth where I cannot see anything (only because I am tired of climbing, take note)? Did he speak the language of these crispy, sharp toothed desert mountains around and understood the meaning of it all? What is the meaning of it all, what keeps all my atoms together in this body that goes up these abrupt stairs led by stubbornness and curiosity? The whole place screams “period glamour” and it’s nothing like I envisioned it. The three of us guests sit there, politely staring at the fine silver serving trays on the patio tables, guarded by a 50-foot waterfall. I am not hungry for anything food, but for a sign, a cool breeze carrying a meaning, a playful shadow in the corner telling me that this is indeed a very special place. I came for answers and I can’t even figure out the questions yet.

I listen to the story of this building and how a very wealthy businessman and politician, William Mead, decided in 1924 to build a healthier place for winter in Palm Springs and hired architect William J. Dodd to design a Mediterranean villa up the hill looking over Coachella Valley. Mead’s wife sold it soon after his death to a very famous attorney at the time, Samuel Untermyer, who once charged $1 million for a single case. This is when The Willow turned into a legend becoming a very welcoming residence for many celebrities of that time: publisher William Randolph Hearst and his mistress, the actress Marion Davies (there is a room on her name in the villa now), Douglas Fairbanks, Mary Pickford, Greta Garbo, Judy Garland.

Einstein came to study for a couple of months at the Cal Tech in Pasadena, on Dec. 30, 1930. About a month later, Untermyer send a chauffeur to bring Einstein and his wife to The Willow for sunbaths and relaxation. I am reading an old account of the visit that Einstein had to learn to use caution when approaching a cactus and that he enjoyed the stay very much. One of his favorite things to do is to walk in the rock garden. Untermyer served his guest lavish dinners in the finest China. Many decades later, one man was on his knee, scrapping the wax off the floor Einstein stepped on in the dining room. His name was Paul Murat and he bought the place with two brothers, Tracy and Andrew Conrad. They worked on restoring the place and transforming it into the bed and breakfast establishment that is today, after many years of being abandoned following Untermyer’s death.

“Oh, Einstein was a nudist. He was sunbathing naked on his balcony”, she said and I forget the name of this lady guest as soon as she introduces herself, after gaily taking a sit next to me. I do not even flinch when I hear the story of Einstein being in the nude at The Willow. I am more intrigued by the fact that she stepped in like a cool breeze, happily humming Madonna’s “Like a Virgin.” I take this as a sign and turn toward her, knowingly, using the by now mandatory “oh.” ”Oh, did you know Madonna was a guest here too?” 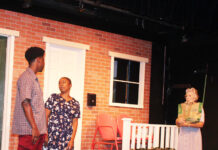 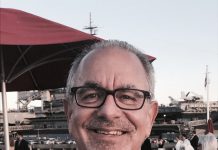 La Mesa pen and ink artist to be featured at Mission...