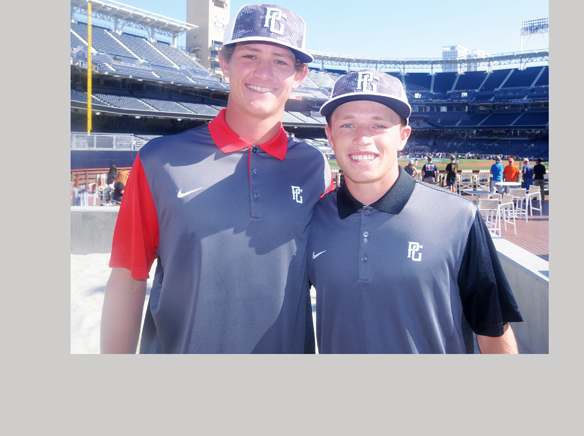 Major League Baseball players and top college prospects hail from all parts of the United States and beyond. La Mesa resident Nick Allen could be one of them in the making.

The incoming senior at the Francis Parker School is scheduled to appear in two high-profile national prep baseball showcase events to close out the summer.

Major League Baseball players and top college prospects hail from all parts of the United States and beyond. La Mesa resident Nick Allen could be one of them in the making.

The incoming senior at the Francis Parker School is scheduled to appear in two high-profile national prep baseball showcase events to close out the summer.

On Saturday, July 23, he will participate in the ninth annual Under Armour All-America Baseball Game in Chicago’s iconic Wrigley Field. It’s then back to San Diego to play in the Perfect Game All-American Classic Aug. 14 at Petco Park.

“It’s an amazing opportunity to be invited to the game—to be named among the top 50 players in the country,” noted Allen of his selection to represent the West team at the Perfect Game All-American Classic. “I’ll be playing against the best players.”

This weekend’s Under Armour All-America Game features a four-day showcase reserved for high school players who have proven to be some of this country’s rising stars. The event provides athletes with a one-in-a-lifetime experience that includes working with a top-notch coaching staff, a formal workout in front of Major League Baseball scouts, a home run derby contest and the game itself.

The future is obviously ahead for Allen, who has selected the University of Southern California at which to continue his baseball career.

“When I started high school, I wanted to play at the Division I college level,” Allen noted. “My goals haven’t changed. I just want to see how far that can take me. “I’m hoping to go in and be able to fight for a starting position—as a freshman, I know that opportunity doesn’t come every day.”

At 5 feet, 9 inches tall and 154 pounds, Allen is not a big man but certainly plays beyond his size.

This past season for Francis Parker, he hit .469 in 31 games with 36 runs scored, 46 hits, 14 RBI, 13 doubles, three triples and five home runs. He led the Lancers in home runs, triple and doubles, total hits and runs scored.

At this point in his high school career, Allen has only been able to make a verbal commitment to play for the Trojans.

“I haven’t signed a letter of intent but I plan to do so in November when I’m eligible to do so,” he said.

Allen lists shortstop as his primary position and second base his secondary position.

He’s been a baseball devotee all his life. One of the players he looked up to while growing up was Derek Jeter of the New York Yankees.

Jeter closed out a star-studded 20-year career with the Yankees in 2014 after earning 14 All-Star Game nods and five World Series championships. He finished his MLB career with a .310 hitting average, 3,465 hits, 260 home runs and 1,311 RBI.

Jeter, now 42, is regarded as one of the most successful MLB players of his generation.

Allen started his playing career at Rancho San Diego Little League. He and his 10U teammates won the state title one year and came in second another year in two trips to the state finals.

Allen said it’s a “dream” to be in the position he is in now, though he admits he’ll be a little nervous when first taking the field alongside other top players in the nation.

“I’ve played here before for high school, so this won’t be my first time playing at Petco Park,” he said. “Every time you step on the field, you get butterflies, but the park is so beautiful that it gives you a calming effect at the same time.”

Allen has played at Francis Parker since he was a freshman. His first year on the team, the Lancers finished 22-9 and won the Division III championship by defeating Mt. Carmel 6-4. As a sophomore, the team finished 18-13 and went 1-2 in the playoffs.

This just completed season—Allen’s junior year—Francis Parker finished 19-12 and advanced to the third round of the playoffs with a 2-2 postseason record.

“We’re hoping we can be Division I or in the Open Division next season with a lot of hard work,” he said.

Hurt said he is “very excited” to be a part of next month’s Perfect Game All-American Classic.

“I’ve been dreaming about this for years,” Hurt explained. “I’ve been coming here every year to watch it and now I’m playing in it. It’s exciting to be selected among the best players in the nation.”

The Falcons advanced as far as this year’s Division I semifinals.

Cowboy’s tumble but never fall down as the crowd cheers them...