Valhalla High School scored a rare double by placing both its boys and girls teams in the Division II final. The third-seeded Norsemen came out victorious with a clutch 2-1 decision against the fourth-seeded San Dieguito Mustangs to capture the division boys championship while the Valhalla girls team, seeded second, fell, 1-0, on a goal eight minutes from time to the fifth-seeded Westview Wolverines.

“It doesn’t happen all the time,” VHS athletic director Steve Bulette said. “Being in the same division in the same year is somewhat rare.”

Both Norsemen teams were able to showcase themselves in front of their fans in a double gender division final May 29 at Eastlake High School.

The VHS boys team, braced by 14 seniors, took the field first, followed by the girls team to close out the quadruple-header of contests at Stan Canaris Stadium.

The Norsemen won their ninth CIF division title in school history and the first since 2009 buttressed by goals from sophomore Sevastian Dekho and senior Dylan Lizarazo.

The CIF title was the fourth for head coach Brad Baughan.

The late George Logan, who was elected to the Valhalla Athletics Hall of Fame in 2013, won five division titles in his long and legendary coaching career that included a 298-74-37 record in 16 seasons and a 53-match unbeaten streak from 1987 to 1990.

Considered by many as the “father of San Diego soccer,” Logan won four consecutive CIF titles from 1986-89 and another in 1991.

The Norsemen, who slipped past seventh-seeded Calexico in the penalty kicks-from-the-mark tiebreaker in the semifinals on May 22, controlled a great deal of action in this year’s Division II final through a ball control game plan.

“We’re a possession-style team, we like to attack from the back,” Baughan said. “We like to see where our opponent’s strength are and adjust.”

The Norsemen didn’t have to adjust their game too much.

Dekho, a danger man on the pitch with blazing speed, scored his section-leading 28th goal in the ninth minute on a breakaway to stake the Norsemen to a quick 1-0 lead. Senior Elijah Martinez received credit for the assist on the goal.

Dekho had several more chances to extend the lead but a series of near-misses kept the Mustangs (13-4-3) within striking range.

San Dieguito Academy finally capitalized on one of its few scoring chances in the match when senior Liam Rindt headed in a perfect cross from the left attacking side from sophomore Soren Groessel just three minutes into the start of the second half.

“They had a perfectly-placed service that we lost track of on the outside,” Baughan said.

The score did not remain deadlocked long, however, as Lizarazo scored on a head shot in front of the Mustang goal in the 49th minute. Martinez had taken the initial corner that placed the ball on Lizarazo’s head.

“We had to regain our confidence,” Baughan said. “We tried to take advantage of our game.”

The Norsemen started their championship run with a 5-0 win over sixth-seeded Sage Creek in the quarterfinals on May 22.

Lizarazo scored twice in the quarterfinal win while seniors Alex Rodriguez and Noel Basaka and Dekho each scored single tallies.

Basaka scored the game-winning tally in the KFM tiebreaker in the semifinals on May 26 while senior Josh Aboytes emerged as the winning goalkeeper as Valhalla won the spot-kick lottery 5-4 following a 1-1 standoff through overtime.

Valhalla received the No. 6 seed in the Southern California Division III regionals but dropped a 3-1 decision to third-seeded Norte Vista in the quarterfinals on June 1.

The Norsemen ended the season 17-5 after placing runner-up in the Grossmont Hills League standings with a 7-3 league record to league champion West Hills (7-0-3 in league play).

“We had a tremendous season,” Baughan said. “I’m so extremely proud. We had a very strong senior class. I’m very proud to see them go out as (CIF) champions.”

Valhalla finished as this year’s GHL girls champion with a 7-1-2 league record. The Lady Norsemen finished the season 11-4-3.

Valhalla, braced by nine seniors, stepped off its playoff odyssey with a 1-0 win over seventh-seeded San Dieguito Academy in the quarterfinals on May 21. Junior Alyssa Kasyouhannon scored the game-winning goal, assisted by sophomore Lillianna Meram.

Valhalla advanced to the final after securing a 4-2 KFM tiebreaker win over sixth-seeded Mission Hills in the semifinals on May 25 after the teams had played to a scoreless match through overtime.

“Our senior goalie stopped two of their shots and four out of five of our kickers made theirs,” VHS coach Gil Vejar said. “It was a good game. Both teams went at each other but couldn’t score in regulation time. Our seniors stepped up big.”

They fought to the bitter end in the team’s next game.

Sophomore Elly Van Den Einde scored the lone goal in the final on a service from junior Courtney Hall.

Steele Canyon advanced teams to the Division I girls final and Division IV boys final on May 29. The Cougars finished runner-up in both contests.

Steele Canyon dropped a 4-0 matchup to top-seeded Del Norte in the girls game while the boys squad came out on the short end of a 1-0 decision to top-seeded Olympian.

The Cougar ladies (9-8-4) saw their streak of three consecutive upset wins end after being seeded 10th in the playoff field.

Meanwhile, the boys of Steele (4-7-4) advanced to the division final for the first time in school history after reaching the CIF semifinals six years ago.

The second-seeded Cougars defeated 10th-seeded High Tech High San Diego, 3-1, in the quarterfinals before tallying a 4-2 KFM victory in the semifinals over third-seeded San Ysidro following a 1-1 deadlock between the teams through overtime.

“We had a lot of adversity by playing in a league that was so highly competitive,” Steele Canyon coach Justin Johnson said. “From there, we trusted each other as a team. It started to come together once we started playing Division IV teams.”

Junior goalkeeper Alex Shields scored on a free kick from 60 yards out with seconds remaining in the semifinal match to force overtime. He then stopped two shots in the KFM tiebreaker while scoring the winning shot. 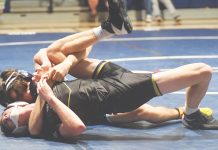