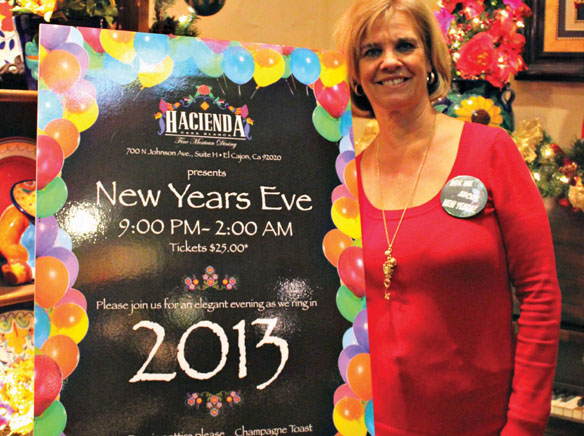 Hacienda Casa Blanca Mexican Restaurant in El Cajon will be hosting a New Year’s Eve party on Dec. 31. Part of the proceeds will go to injured Sheriff’s Detective Ali Perez for his continued recovery.

Hacienda Casa Blanca Mexican Restaurant in El Cajon will be hosting a New Year’s Eve party on Dec. 31. Part of the proceeds will go to injured Sheriff’s Detective Ali Perez for his continued recovery.

Lakeside resident, Angela Ellis, noted that the benefit party “Sounded like it was going towards a good cause.”
A 15-minute shootout on Tuesday, Sept. 25 at a Lakeside apartment complex left two sheriff deputies, and a suspected child molester injured. Daniel Witczak, 30, opened fire as a team of deputies arrived at his apartment to investigate allegations of child abuse. Witczak’s girlfriend contacted police when she found pornographic pictures of her two daughters, ages 6 and 8, on his cell phone according to the sheriff’s department. Sgt. Craig Johnson and Detective Ali Perez were wounded in the gunfire.

The benefit will include an appetizer buffet, two dance floors, two D.J.s, party favors, a balloon drop, and a champagne toast at midnight. Since we all survived Dec. 21 and the end of the world, this is the perfect opportunity to survive the end of 2012 and look forward to 2013.

Since champagne and spirits will be involved, Cindy Gomez, co-owner of the restaurant with husband Tony, noted that in each group a designated driver can be selected to wear a special neon green wristband. That wristband will signal to servers to not serve any alcohol to that person.

Gomez has consistently, and with dependability, given back to the community not only by thinking about the welfare of Officer Perez but also through many other ways in the El Cajon and East County area.

For example, Gomez noted that they donate services or contributions to at least five to ten groups a year. Among them is the Fresh Start Program for youth and they’ve also participated in the Mother Goose Parade with a float. Gomez is known for getting out into the community and being a “giver.”

While the event flyer says “Please join us for an elegant evening…” Gomez pointed out “that the attire can be casual…” but no flip-flops or overly casual dress.

Ellis explained that the food at Hacienda is a must have “for her out of town guests who want Mexican food.” Ellis also liked the idea of a more casual attire setting.

Hacienda Casa Blanca, which was formerly known as Antonio’s Hacienda, has had a series of renovations under Gomez’ hand. What partygoers will be also able to enjoy, even on Dec.31, is the Christmas lights located by the entrance with reindeer and Santa’s sleigh dangling from the trees. The restaurant’s interior is vividly alive with colors straight out of Mexico.

It’s fiesta time at the Hacienda. New Year’s Eve tickets are $25 ($30 at the door). They can be purchased online or in person at the restaurant located at 700 N. Johnson Avenue, Suite H, in El Cajon. You can help Detective Perez while enjoying the party, which is scheduled from 9:00 p.m. to 2:00 a.m. Vamos a jugar or “Let’s play” at the Hacienda!