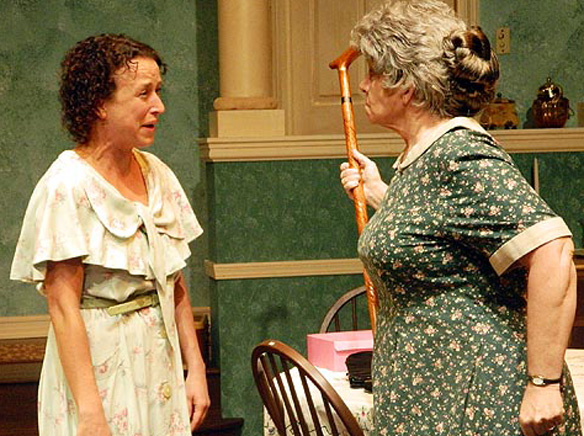 After penning a series of highly successful — often breezy — comedies over a 20-year span (including “Sweet Charity,” “Come Blow Your Horn,” “Barefoot In the Park,” “The Odd Couple,” “The Out-Of-Towners,” “The Sunshine Boys” and “The Goodbye Girl,” among many others), playwright Marvin Neil Simon penned one of his first successful dramas, “Lost In Yonkers,” in 1991.

After penning a series of highly successful — often breezy — comedies over a 20-year span (including “Sweet Charity,” “Come Blow Your Horn,” “Barefoot In the Park,” “The Odd Couple,” “The Out-Of-Towners,” “The Sunshine Boys” and “The Goodbye Girl,” among many others), playwright Marvin Neil Simon penned one of his first successful dramas, “Lost In Yonkers,” in 1991.

It was so successful — critically, at least — that it won him his first Pulitzer Prize (the film version is a different story all together).
Now, the Grossmont Community College theater arts department is giving this production a go, running through May 12 at the campus’ Stagehouse Theater. And while few laughs are culled from this effort, there is some fine acting and heartbreaking pathos to go along with the rare, but finely-placed comedic moments.

Directed by Grossmont veteran Jeannette Thomas (“Hamlet,” “The Laramie Project,” “Once Upon a Mattress”), the cast was given more than just guffaws to go after.

“I think this shows the depth of Simon as a writer,” she said. “The comedy in there, in smaller doses, but the drama really gives our actors something substantial to sink their teeth into. And they all do a great job with it.”

The play begins in 1942, when America was still experiencing setbacks in both the European and Pacific war theaters.

She evidently died of cancer and Eddie had to borrow money from a loanshark to pay for her pain medication.

Unable to pay him back, though, Eddie must take a job selling scrap iron to factories in the South. If that isn’t bad enough, he must crawl to his mother (Kate Hewitt , Grossmont’s “The Vagina Monologues,” Lamplighter’s “Nunsense”) and beg her to care for the boys while he is gone.

The young men bad-mouth her as she is unseen for the play’s first 15 minutes. When she does appear, however, the old lady is every bit as horrid as they describe her.


As played by Hewitt, the grandmother, a Jewish emigrant from Germany, is foul, nasty, impatient and ill-tempered.

For a more apt representation, just think of her as a female Grinch — only with less charm and charisma.

There seems to be not a shred of love or humanity, in her. Her own daughter, Bella (Layla Stuckey, Octad-One’s “Dancing At Lugnasa” and an Eastie Award nominee for “Agnes Of God”), describes her touch as like “cold steel.”

Of course, she had to be strong, after losing two of her children in youth and putting up with the weak Eddie, the dullard Bella, tough-guy hood Louis (Ryan Casselman) and the nondescript Gertie (Katherine Bothwell, who cannot seem to speak without gasping the last part of her sentences — which becomes quite annoying after a while).

Still, these offspring are most likely this way because of her lack of warmth, love and emotion.

Meanwhile, amidst all of this familial histrionics, the boys are struggling to survive, themselves. Various letters from their father seem to show him trying to earn a living and dealing with health and money problems.

Their grandmother constantly berates them, forces them to work in her confectionery store and basically tells them what losers they and the rest of her brood are.

The only real humor comes out of the kids’ inability to cope with the cackling old bag until their dad can take them back home again.
They also must deal with their scatterbrained aunt Bella and the wisecracking mug, Louie. Jay is so enamored with this lug, though, that he dreams of running away with him for a life of crime.

Then, when Bella falls in love with an usher at a local movie house, all heck breaks loose.

This is where Bella really comes to life and finally stands up to her mother. Like the classic confrontation scene between Eve Harrington and Margo Channing in “All About Eve,” they pound at each other with harsh and biting words. Grandma accuses her daughter of only having the mind of a child, being an imbecile; while Bella’s slings and arrows hit truer and paint her mom as an unfeeling, uncaring automaton who withheld love and affection more as a punishment than a necessity.

In these scenes, Hewitt and Stuckey are absolutely amazing. Hewitt, especially, with her hard, unflinching German accent (perfect throughout the production), granite-like features and armor-plated exterior, she plays bitter and resolute like few local community theater players before her. It’s a an unsympathetic, yet deeply moving performance.

“I had directed this play many years ago at the Patio Playhouse, so when I was offered the part, I really looked forward to it,” Hewitt said. “Grandma Kurnitz is not likable at all. There is a small shred of humanity at the end, but overall, she is pretty nasty. I love playing roles that are unsympathetic, though.”

As far as Stuckey,, her Bella is at once sweet, silly, irritating and complex. She goes from a complete idiot at times to someone quite deep and layered.

“Even though Bella comes across as pretty simple, she is really very complicated,” Stuckey ssaid. “I was also surprised to find a lot of myself in her character. Knowing that, I was able to bring more to this part.”

The youngest cast member, Bunshaft (the little brother of Jordan, who starred in the school’s recent musical production of “The 25th Annual Putnam County Spelling Bee”), added, “This is an incredible play.