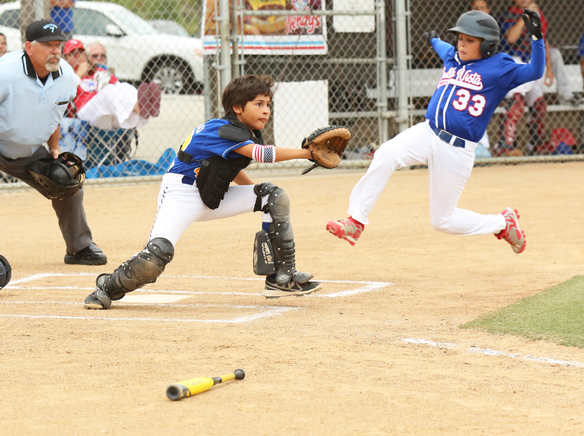 The proverbial road to Williamsport, Pa.—and the coveted Little League World Series—starts with local championships at the district level, and then proceeds to the section level and beyond to include the Southern California sub-division and division championships that ultimately lead to the West Region championships and, at this point, national television exposure.

All-star tournament play traditionally starts in late June and runs into August for some age divisions.

Surviving teams are currently engaged in competition at the Southern California sub-regional level, with winners eyeing coveted Division III titles at the 10U, 11U and 12U levels the last weekend in July.

Section 7 champion Spring Valley won its opening two games in the sub-division tournament by defeating Clairemont, 11-3, on July 19 and edging Central Garden Grove, 17-15, in a high-scoring affair on July 20.

Spring Valley drew a rematch against Central Garden Grove on Tuesday after the Section 10 champions eliminated Section 6 champion Clairemont, 9-7, in a losers bracket game on Monday.

District 42 champion Luckie Waller captured the first game in the teams’ best-of-three championship series by a score of 5-1 before host Spring Valley reversed its fortunes with consecutive 15-4 and 15-12 victories to claim the section title.

The winner of the sub-division tournament advances to the Southern California Division III championship tournament. From there, teams advance to regional competition.

A pair of East County teams—Fletcher Hills in the 10U division and Rancho San Diego in the 11U Division—advanced to the championship round at this year’s Little League section championships.

The section tournament initially started in Imperial Valley, as hosted by District 22, but with the final two teams both hailing from San Diego County, the championship series took place at the Sweetwater Valley Little League complex in Bonita July 14-15.

Fletcher Hills erased a 4-1 deficit against CV American to win 5-4 on July 14 to force a second championship game—the so-called “if” game—the following day.

CV American pushed across what proved to be the winning run on a single by Devin Hinojosa in the top of the seventh inning to prevail for the section title and, in the process, eliminate Fletcher Hills from postseason play.

The 10U and 11U division playoffs both end at the division level.

Brawley defeated Rancho San Diego, 7-3, in the challenger bracket final on July 14 to draw a championship rematch against Sweetwater Valley. The District 42 champions won 14-2 to advance to the sub-division round.

Spring Valley defeated Rancho Jamul in the challenger bracket final on July 14 to advance to the championship game against Brawley the following day. However, Brawley earned the right to advance to this week’s sub-division tournament at Rancho Peñasquitos Little League with a victory against Spring Valley.