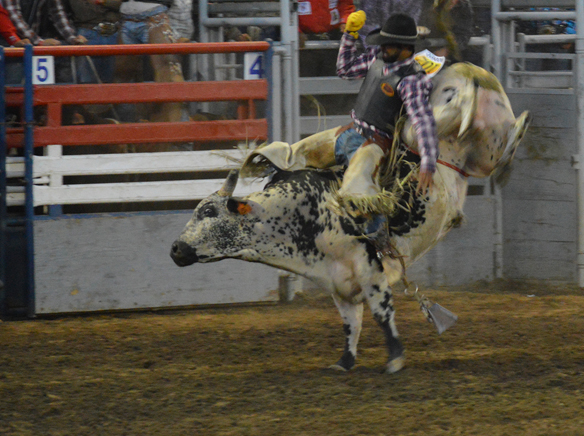 Frank Chapman was jettisoned ten feet sideways. He tumbled to the floor and quickly shot up back to his feet, his head spinning with the images of painted clown faces and giant deadly horns. This was not a scene from one of Chapman’s nightmares however. This is bull riding, the most dangerous eight seconds in sports.

Frank Chapman was jettisoned ten feet sideways. He tumbled to the floor and quickly shot up back to his feet, his head spinning with the images of painted clown faces and giant deadly horns. This was not a scene from one of Chapman’s nightmares however. This is bull riding, the most dangerous eight seconds in sports.

Chapman and 40 other cowboys battled beasts in front of thousands at the Optimist Bulls Only XVI Rodeo. The Optimist Club of Lakeside, Barona and El Cajon Ford were the main sponsors of the event. Proceeds from the rodeo go directly in helping local children.

Bull riding was the main attraction, but extreme bronc riding, mutton busting (toddlers riding sheep) and cheery antics of the rodeo’s crew kept the spirits high and the audience a part of the show. A cowboy prayer before the competitions and a barrel clown proposing to his girlfriend gave the audience a look into realities of these people’s lives.

George Valdivido, won the grand prize in bull riding with his 80-point ride in the average, and in the winner take all ride for the top six competitors.

Bulls aren’t the only dangerous animals at the rodeo. Extreme bronc riding consists of a person team who work to capture, saddle and ride a wild horse. All five horses are released at once as chaos ensues across the arena. Horses drag grown men around as others hang on for dear life as the giant horse attempts to hurl them to the ground. Team Agin.com won the extreme bronc riding competition, finishing first place both nights.

David Delmart a Lakeside resident and usher, has been a part of the rodeo for 27 years and said the rodeo is a great thing for the community.

“I really love the rodeo and what it does. How it produces things for the kids,” he said. “I get a lot of joy out of that. I usually work over at the handicap section. I got to bring my brother here one time, he is handicapped and that’s why I took over that section, I asked to. Everybody comes together out here. There are a lot of country people. A’int nothing like country people, you know?”

There is a whole lot more to the rodeo though than meets the eye, said Delmart.

“What I get out of it is helping kids,” he said. “We don’t want any kids on the streets. We want the kids to be able to come to us. See none of us get paid here. We’re all volunteers. So the things we do here are for the kids, not the parents. We’re just trying to get our message out to the kids is, we don’t want you at home we want you out doing something.”

Delmart said that’s why the rodeo was created in the first place.

“It (rodeo) was brought here by Ben Bruton for that reason, to take care of our kids,” he said. “The government doesn’t take care of them, we do. All these people here in the stands, contributing. People need to become closer like they used to, they have gotten away from that. Lakeside used to have plenty of cattle, pigs, dove, quail, deer, rabbit and everybody helped each other.“

Lakeside has changed a lot in 54 years, getting away from the farm-based community it was, said Delmart.

“They had a dairy on winter gardens but they’re shutting that down. This is something I don’t agree with, our damn government is paying our dairies to shut down. They want us to purchase it from somewhere else, instead of us standing on our own two feet.”

Delmart said he encouraged people to attend monthly community meetings and get involved at the rodeo.

“I miss the dances they used to have out here at the rodeo grounds. We would make more money and that’s better than the money going to the other bars around here. The other thing is all the volunteers around here are getting a little older. The rodeo is going to go if we don’t get more volunteers that are younger.”

That is where it comes back around to Frank Chapman.

Chapman is not only a bull rider—he is also a Big Brother. Not the biological kind of the brother that you may think though. This is the Big Brothers and Big Sisters program. That pairs 7 to 18 year old kids with an adult mentor.

Jannette Kutchins, program manager for recruitment and training at Big Brothers Big Sisters, said Chapman is passionate about the program.

“He is the one who arranged for us to be here, because he believes in the cause,” she said. “He brought one of his friends to sign up, he’s promoting it because he knows how much it helps the kids.”

Kutchins said they have about 500 kids waiting now, about 60 percent of them boys.

“The goal is to improve the life of a child,” she said. “These kids come from an environment where it might be a single parent. Especially a mom with a boy, they can only teach a child to be a person but not to be a man. They need a male role model. Our boys are waiting a year and a half for a mentor and a lot could happen in that time. They could join a gang, they could use drugs, whereas having a mentor might prevent that. We are really trying to send out a message for men to be involved, although we do need women too. For as little as four hours a month, for a year, it makes a lifetime of difference.”

Living history, Edna Kouns and fun at the library