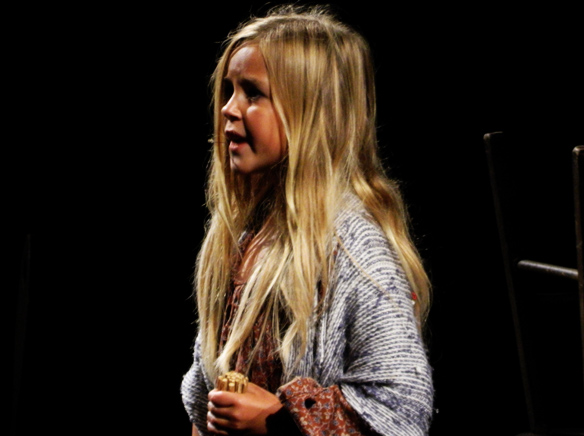 Les Misérables cast dreamed a dream in a time gone by. Three hours time to be specific. And the time went by too fast.

From start to finish, the musical was engaging. This cast was faced with big shoes to fill, as this is a story line of large magnitude as well as literary significance. The shoe fit perfectly. Their paramount performance brought laughs, tears and sighs to a large, expectant crowd.

Les Misérables cast dreamed a dream in a time gone by. Three hours time to be specific. And the time went by too fast.

From start to finish, the musical was engaging. This cast was faced with big shoes to fill, as this is a story line of large magnitude as well as literary significance. The shoe fit perfectly. Their paramount performance brought laughs, tears and sighs to a large, expectant crowd.

Each member, both lead and supporting, exhibited an amazing dedication throughout the duration of the play. Never breaking face and continuing to act in the background were small acts of commitment that paid off big.

It was as if every character cast could not have been played more significantly by any other. As an experienced performer, Matthew Posner played the lead role of Jean Valjean. The time progression throughout the musical and his ability to believably act according to each different year clearly showed his capabilities as a performer. Valjean’s character’s difficult but admirable journey was portrayed perfectly in the hands of this actor. The juxtaposition between him and Jon Thuerbach’s character Javert, who is set on finding the escaped Valjean and enforcing the law, is a relationship that’s intricate nature of crime and punishment is seamlessly developed and presented by the two.

Depressingly strained, the story of Fantine played by Brianna Hertzberg was sure to break and wrench the hearts of spectators regardless, but Hertzberg brought new layers to a flawed and equally exquisite character. Every move on a stage is an opportunity to tell a story and this actress took advantage of each step. She strung the magnificent story of the struggle to provide for her child, the product of a young love lost. Hauntingly beautiful, Hertzberg sang the most impressive and saddening songs of the night, “I Dreamed a Dream.” Sung early in the musical, it set the standard for the rest of the night. Luckily the rest of the cast was able to reach the bar.

In light of the aforementioned song, ones that tune fittingly reoccurred through the night, a theme throughout the musical correlates with a lyric referring to being “young and unafraid.” This description fits that of Gavroche, played by 7-year-old Gavin Danger. This small hero packs a big punch. The character is a tiny but powerful revolutionary who is tough as well as humble and persevering. The actor was a reflection of his muse.

Although at several times the technical aspect fell short and his mic went out, he sang on and sang loud and came out on top as the mouse that roared.

Cassidy Smith played young Cosette and although her time on the stage was short, it was not wasted. Both young performers showed skill beyond their years.

In the ever-present theme of young love there is that between the grown Cosette Marius who fall in love upon sight and the triangle that is created by Eponine’s pure, agape love for him. Tyler Tafolla plays the role as Marius extraordinarily with the ability to make the audience believe the emotions he is feeling. His passion is apparent and his character is multi faceted. He is torn between the war and his true love for Kelly Prendergast’s Cosette. This makes it all the more difficult for Madelyn Adams Eponine, who must watch and even help Marius win over Cosette. Adams ability to bring spectators beyond the seats of the theatre and into the world of the musical was brilliant. Her pain was apparent and viewers could feel it through her.

It seems depraved in itself to describe something so corrupt and immoral as enchanting, but that is exactly the effect Monsieur and Madame Thenardier had. Played by Danica Russell and Alex Whyte, their performance was truly enthralling. These foul mouthed, conniving thieves put on a show that added a villainous element while also providing comic relief.

This outstanding display of theatre by a phenomenal group of performers was a glorious testament to the legacy of Christian Community Theatre’s productions at the top of Mt. Helix. Although it was a cold night, it seems that this community has warmly welcomed the return of CCT to Mt. Helix.