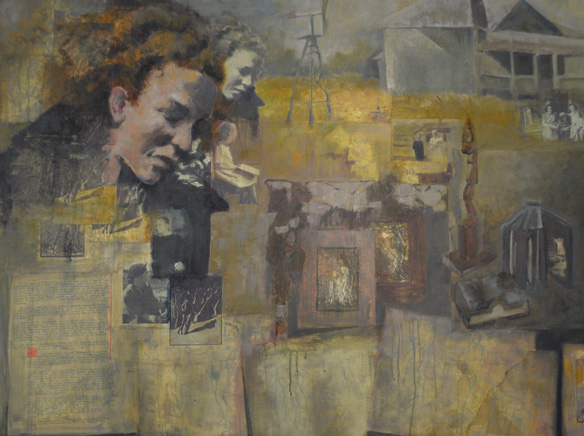 Lemon Grove Library is now host to some of the works of long time Lemon Grove artist Kathleen Strzelecki. Kicking off the exhibit, with the conjoining of the Lemon Grove Historical Society and the San Diego County Library System, this exhibit of Strzelecki’s heartfelt works portrays the things closest to her, family and friends.

Lemon Grove Library is now host to some of the works of long time Lemon Grove artist Kathleen Strzelecki. Kicking off the exhibit, with the conjoining of the Lemon Grove Historical Society and the San Diego County Library System, this exhibit of Strzelecki’s heartfelt works portrays the things closest to her, family and friends.

“Art Talk” was held on Saturday, Jan. 11, where Lemon Grove Historical Society President Helen Ofield along with Strzelecki, gave the audience a look inside the world of the artist, comparing this showing a continuation of the work of renaissance artist Andrea Mantegna.

Strzelecki said both her father and mother were artists, her father a strong influence in her life. Her mother died when she was very young, but her artistry continued with the family. She began with her first charcoal set and since then has worked in all mediums within her great scope of art, introducing herself through classes to oils later in life. She said she loved working with wet oils because they were so pliable and had the ability to use any instrument or technique to get the effect she was looking for.

Most remarkable, and memorable was the painting in the Rosemary Putnam Community Room. Strzelecki said it was a discovery of her mother as she worked on this piece. Her father, who could not bear the loss, tucked her mother’s things away and moved the family to California. She said when she decided to create a theme in a way of capturing family history, she pulled out her mother’s things and went through them all. She used photographs to capture her mother’s character and within the multi-media painting are hidden treasures of her mother’s drawings, letters, the house they lived in, her siblings. She said it was a journey for her and as difficult as it was at times, she felt she finally got to know her mother through the painting. She intended to give it to her brother, but Ofield convinced her to sell it to her because she loved the painting so much and she “never wanted this piece of art to leave Lemon Grove.”

Strzelecki said that she is not a portrait painter, so if you want something pretty, do not ask her to do it. She said she looks to capture the character of the subject, not an exact duplicate and incorporates all of her years of artistry in several mediums to capture that moment, that time and that person.

Her pieces line the walls throughout the Lemon Grove Library. This showcase is on display until Jan. 31. It is well worth the trip, maybe several to soak in the brilliance of Stzelecki’s works. Each one is exemplary in style, technique and uniqueness and many are complex that will have you looking at segments of the paintings, putting the pieces of her life together. It truly is a walk through the life of this phenomenal artist, and in many ways a walk through the life of anyone that catches a glimpse of what she is telling.