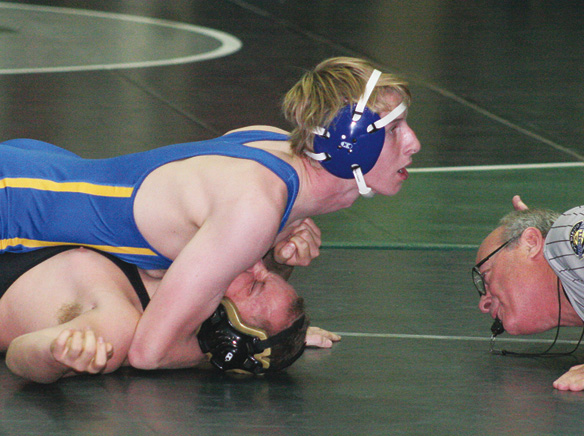 High school wrestling exhibited its “dual” nature over the weekend for a pair of East County teams, as the Grossmont Foothillers and Granite Hills Eagles competed in the fourth annual Lancer varsity dual team tournament at Hilltop High School.

High school wrestling exhibited its “dual” nature over the weekend for a pair of East County teams, as the Grossmont Foothillers and Granite Hills Eagles competed in the fourth annual Lancer varsity dual team tournament at Hilltop High School.

Wrestling is known both as an individual and team sport. Its individual nature is highlighted at the end of the season by league, division and section tournaments that award medals to individual place-winners, with the opportunity to qualify for the state championship meet.

Wrestling’s dual nature is highlighted by team versus team competition during the regular season where wrestlers in each weight class pair off against their respective opponent in a one-on-one battle, usually under the spotlight in gyms jammed with roaring fans.

Among East County mat squads, the Grossmont Foothillers have generated a great deal of success as the 2013-14 season reaches its midpoint.

The Foothillers finished 3-1 at the Hilltop dual tournament to improve to 7-1 on the season.

Grossmont suffered its first loss in its opening dual against Mt. Carmel (56-22) but rebounded with consecutive wins against Mira Mesa (38-36) and Army-Navy (60-24) to secure a second-place finish in its pool and, in the process, advance to the third-place dual against Patrick Henry, which also finished in second place in its pool.

The Foothillers defeated the Patriots to cap a full day of competition at the 10-team tournament. The balance of the season looks to continue to hold promise, according to Bell, who feels his team remains in contention for this year’s league dual championship title.

“I think Steele Canyon will be out toughest dual, but we have Valhalla this week and that should be pretty tough as well,” Bell said.

The Foothillers will journey to the Norsemen’s gym for a GHL dual encounter on Thursday, Jan. 16, slated for a 6:30 p.m. start. Grossmont will visit Steele Canyon on Jan. 30 and close out the league dual season with match-ups against West Hills (home) on Feb. 6 and Helix (away) on Feb. 13.

Bell said he likes the resiliency shown by his team as it has come together throughout the season.

“If one of our guys loses, another guy picks him up,” Bell said.

Chan  entered the Lancer duals with medals in three previous tournaments: third at the Mar Vista Battle by the Beach, first at the Mira Mesa Marauder Invitational and second at December’s prestigious El Cajon Invitational.

Tiensvold earned a third-place finish at the Battle by the Beach while also taking fourth at the Marauder Invitational; Harmon finished fourth at both the Mira Mesa and ECI tourneys.

Granite Hills entered the Lancer duals with a 2-3 dual meet team record and finished in sixth place at the Hilltop tournament following a 1-3 showing.

The Eagles topped Torrey Pines, 30-27, but came up on the short end in dual match-ups against Patrick Henry (56-19) and Hilltop (45-27) in pool competition and, in the fifth place match, to Mira Mesa.

“This tournament is designed to allow teams to wrestle in a dual meet format,” said Juarez, a two-time divisional and two-time San Diego Masters champion. “The dual meet season is (heating) up for league.”

Up next for East County wrestling teams is Saturday’s Monte Vista Invitational in Spring Valley.