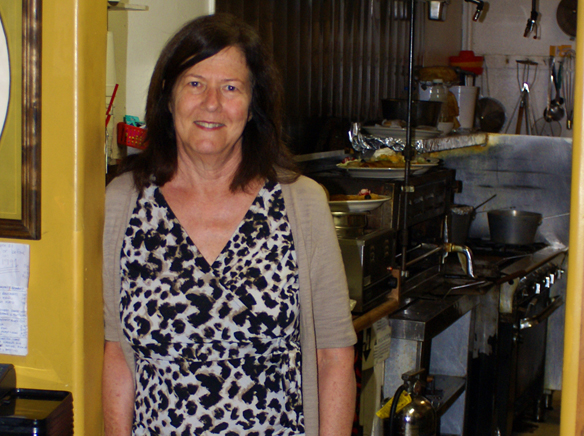 La Palapa Mexican Restaurant has been a Lakeside staple for 30 years.
Bernadette Kelly-Sherman and Jan Kobylka opened La Palapa on March 7, 1983. “Lakeside’s been good to me. I’d take Lakeside (over other places) any time. I worked in La Jolla for eight years and my experience here is far more pleasant,” Kelly-Sherman said.

La Palapa Mexican Restaurant has been a Lakeside staple for 30 years.
Bernadette Kelly-Sherman and Jan Kobylka opened La Palapa on March 7, 1983. “Lakeside’s been good to me. I’d take Lakeside (over other places) any time. I worked in La Jolla for eight years and my experience here is far more pleasant,” Kelly-Sherman said.

Kelly-Sherman and Kobylka worked at the Rhinelander restaurant in La Jolla Shores before opening La Palapa. Kelly-Sherman bought out Kobylka in 1991. “It’s just been a rollercoaster ride through the years,” Kelly-Sherman said.

Some of those rough periods were due to economic situations. “We weathered the recession of 2008,” Kelly-Sherman said. “I didn’t think we were going to make it, but we weathered through it.”
Many of the items have been on the restaurant menu the entire time. “We’ve added a few new items over the years. However, most things are original,” she said.

Kelly-Sherman is a server as well as the owner and business manager of La Palapa. “I wear a lot of hats, but I like what I do,” she said.

Kelly-Sherman was raised in Tucson and worked as a server at the Pancake House, Howard Johnson’s and Vito’s restaurants there. “I never expected to actually own a restaurant,” she said.
Kelly-Sherman came to San Diego to attend the University of San Diego. She graduated with a psychology degree in 1974, and then worked at the Rhinelander to pay her rent.

Eventually Kelly-Sherman and Kobylka made the decision to open their own restaurant. “We had different styles, but our goal was always to take the very best care of our customers, give them a good product at a reasonable price,” Kelly-Sherman said.

Kobylka was a trained cook before he escaped from Czechoslovakia. He also had bartending experience, so he could complement Kelly-Sherman’s restaurant skills. The two needed a location for their restaurant. “We couldn’t afford anything located west of the Interstate 805, so we came out to Lakeside. At first, I had to get directions to get here,” Kelly-Sherman said.

They also had to decide on what type of a restaurant to open. “We had to serve a food that people would want to eat,” Kelly-Sherman said.
Since neither she nor Kobylka are from Mexico, La Palapa does not reflect any particular region, but rather is a hybrid of Mexican authenticity and American tastes. Describing the name of the establishment, she explained that a ‘palapa is a thatch-roof hut.

Kelly-Sherman initially commuted from Mira Mesa before purchasing her home in Lakeside. “It’s provided me an opportunity to raise my daughter here,” she said.
Her daughter Maura Kelly, who attended Our Lady of Perpetual Help School, is now 25 and will receive her master’s of fine arts from Chapman University’s film school in May.
Although La Palapa has always had a liquor license, originally the restaurant comprised only its current west side, and its margaritas were prepared on a coffee table in the corner of the kitchen.

Nine months after the restaurant opened, they acquired the adjacent suite to the east, which now features the restaurant’s cocktail lounge. Although there is an actual bar, customers can bring children under age 21 into the eastern area.
“It’s an additional dining area,” Kelly-Sherman said. She doesn’t consider La Palapa to be a bar. “It’s actually a restaurant with cocktails available,” she said.

In February, the bar area was enhanced. “We updated our bar and added five TVs,” Kelly-Sherman said.
La Palapa has approximately 20 employees. “I’ve been very fortunate to have long-term employees,” Kelly-Sherman said. “It’s not unusual for me to have employees who have been here for 10, 15 and even close to 30 years,” she added.
Many of Kelly-Sherman’s customers have also been long-term regulars and many have added their children and grandchildren to the group of La Palapa’s patrons.

“I’ve got the best customers you’d want to have,” Kelly-Sherman said. “I’ve just been so honored to be a part of so many people’s lives over the years. That’s probably the biggest payoff.”
Kelly-Sherman noted that a formal 30th anniversary celebration is in the plans sometime during this year.

Miss Reardon makes an appearance at Lamplighters, staying through September