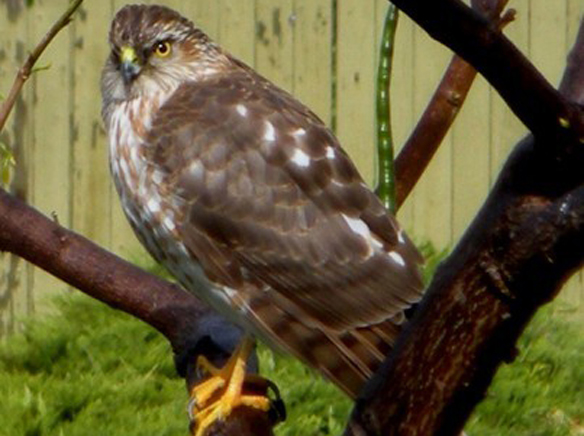 Life can be treacherous for hawks. Known as raptors, these birds of prey can fall prey themselves by the hands of humans.
Sometimes shot at by BB or pellet guns, other times getting hit by a vehicle, these birds are often left by the roadside to die. But the raptor may get a second chance at life if someone manages to call Sky Hunters.

Life can be treacherous for hawks. Known as raptors, these birds of prey can fall prey themselves by the hands of humans.
Sometimes shot at by BB or pellet guns, other times getting hit by a vehicle, these birds are often left by the roadside to die. But the raptor may get a second chance at life if someone manages to call Sky Hunters.

Founded in 1996, the Sky Hunter’s Raptor Rehabilitation and Education is a non-profit headed up by Nancy Conney at her ranch in Lakeside. Staffed by volunteers, the organization—and the raptors—are completely dependent on donations and fundraising to cover expenses.

The purpose of Sky Hunters is to inform the public about the raptors. The organization’s two main goals is to care for the sick, injured and orphaned raptors and educate the community about preservation of the local wildlife.

Sky Hunters has its U.S. Federal Fish & Wildlife permits for Rehabilitation, Education, and Eagle possession. The non-profit also has State Fish & Game permits for Rehabilitation and Education. As many as 300 ‘rehab raptors’ are cared for by Sky Hunters each year.
Conney ensures that the birds have a proper diet, consuming the same food they would in the wild. She keeps the enclosures clean and arranges for twice-a-year check-ups with a veterinarian. All of the raptors have a 70-foot flight cage. The cage is large enough so that the newly-rehabbed birds can practice their flight conditioning. To prevent improper ‘human imprinting,’ chicks that are hatched while its mother is being cared for are fed from a puppet shaped like a bird. They then go into a small enclosure to start exercising and eventually into the large flight for release.

Adult birds recovering from an injury get care and attention from their staff veterinarian, as well as any necessary medication for any illness. They then are given some flight time and when ready, are released back to the area where they were found.
Daily nutrition for these creatures can be tricky and expensive. A RedTailed Hawk, which weighs a total of only four pounds, has a wing span of four feet and consumes about four mice a day. A barn owl will typically eat two mice each day, while a Great Horned Owl and a Harris Hawk each eat three mice daily.

“Most people don’t know the proper care and handling instructions and can end up hurting themselves or the bird accidentally,” she said.
The first thing to do when someone finds an injured raptor is to protect oneself by wearing gloves and covering the bird with a towel or blanket.

“Remember these birds are wild. They don’t know you are trying to help,” Conney said.
A cardboard box with air holes can be used as a temporary container to move the bird to safety. Once contained, move it somewhere warm, dark and quiet. Then call a licensed rehabilitation group such as Sky Hunters 619-445-6565.

Sky Hunters is open to the public for on-site tours on Saturday and Sundays from 12 noon until 4 p.m. by appointment.

Preparing your home for recovery after orthopedic surgery