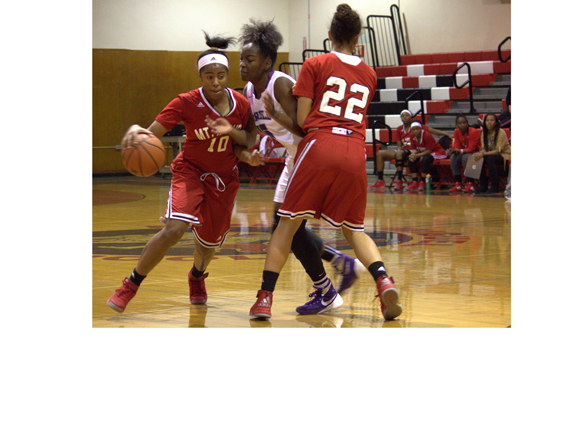 It is a new year and a new chance for 2015-16 athletes to prove their gumption. In the week between Christmas and New Year’s Eve, high school teams across East County entertained out-of-state competition for non-conference games or traveled away to test their skills on distant courts.

It is a new year and a new chance for 2015-16 athletes to prove their gumption. In the week between Christmas and New Year’s Eve, high school teams across East County entertained out-of-state competition for non-conference games or traveled away to test their skills on distant courts.

Defending their court in a non-conference game against Garfield High School, hailing from Washington, Mount Miguel’s Lady Matadors played a tough game. Coming up from behind in the first quarter and maintaining a shaky 10-point lead for most of the game, the Lady Matadors had to pull out all the stops to finally snatch up the 54-48 victory.

The first quarter was marked with missed and fumbled plays. Despite being quick on their feet and always ready to meet the moment, the Lady Matadors had a case of slippery fingers, letting the ball slide right out of their hands between passes and before shot attempts.

Setbacks did not seem to faze the fearless fighters and by the end of the third quarter they had replaced their butterfingers with an agile, if imperfect, grip.

In the last two minutes of the game, the Garfield Bulldogs made one final push to overtake the Matadors slim lead. The ladies of Mount Miguel would not allow it.

“It’s important to help our kids keep their composure,” said Sandoval. “You can see down the stretch there that we kind of lost our composure, turning the ball a little too much. It’s a learning process.”

Sandoval said the team is playing better this year than last, even if the going is rocky. They are 8-5 for conference, which is a vast improvement for the squad from previous seasons, said Sandoval.

“They continue to fight,” he said. “We are a little up and down this year. Last year we played awful. It’s early on in the year, we’re trying to work out the kinks. Our point guard is only a sophomore so she’s still learning how to be a leader and take care of the ball but it takes a team effort and tonight we were able to hold them off.”

“We need to work on coming out hard and finishing hard,” she said. “We’re pretty good at getting up and down the floor. We need to work a little bit more on our defense and executing. Just play smart.”

“We still need to work on some things but I feel good,” she said. “We need to play as a team, stay together, communicate. Things will fall into place. We’re a really good team.”

Anderson said she has experience playing out-of-state teams like this one from Washington, but that she was impressed with the Bulldogs.

“I’ve played against plenty of out-of-state teams but that was a pretty good one,” she said. “They lost their best players too, so the game probably would have been tougher.”

The Lady Matadors pick up their season again on January 9 against the Westview Wolverines, and they have high hopes for what follows.