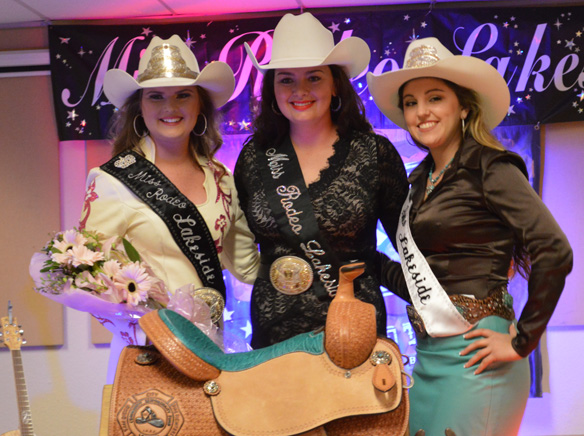 It is not your typical beauty pageant, and the winners represent one of America’s oldest western traditions and now sporting events that began its journey in the 1700s. In local competitions, you will not find them strolling down the runway in the latest casual and formal wear, but they are judged on horsemanship, rodeo competitions and most important, the ability to represent the sport of rodeo. This year, Lakeside chose its 2015 Miss Rodeo and Junior Miss Rodeo Lakeside representatives at its 2015 Miss Rodeo Lakeside and Sweetheart Dance at the Lakeside Rodeo grounds on Feb. 21.

After several previous titles, Hop, 19, said that this past year with Owens-Sarno was a fun and learning experience.

“Rachel helped me to grow and formed me to become Miss Rodeo Lakeside,” she said. It’s going to be hard to top last year, because this past year has been so good to me. But I’m looking forward to the rodeo, travelling, meeting new people.”

Lakeside’s Owens-Sarno relinquished her crown after several titles since 2007 and said the past year was incredible and she wanted this title for so long it was everything she could have asked for.

“I had such a supportive committee, and had such a great time with Amanda. She is absolutely hilarious,” she said. “We have such similar personalities and hobbies and all my other sister queens, rodeo and miss alike, we had a blast. Every minute of it was perfect.”

Owens-Sarno said she is going to take the next eight months, work, chill, barrel race and team rope a bit and plan on competing for Miss Rodeo California again this year. Competing last year, she came in third and earned the Miss Congeniality Award. She said she is still working on majoring in communications and her ideal job would be utilizing her degree in the rodeo circuit.

Finney, 24, from Santee said this is her second rodeo title and that she could not be more excited.

“I really love the horsemanship, because I love riding,” she said. “I am looking forward to getting to know Amanda better this year.”

Finney attends Pima Medical Institute, works as a veterinary tech and plans on finishing her degree in November. But her ultimate goal is to become a veterinarian.

She said though she lives in Santee, her horses and friends are all in Lakeside, and her competing horse’s name is Jewel.

“She’s a red roan quarter horse,” she said. “She is only five, so she is still learning a lot, or we are learning a lot together.”

Pageant Director Emily Junk said this was the first time that they held the concert and dance along with the coronation. She said everyone was excited, yet a bit sad at Owens-Sarno’s departure.

“Rachel’s done an amazing job all year, representing us here in Lakeside and throughout California. But we are very excited about her future,” she said. “And Amanda coming in as the new Miss Rodeo Lakeside is the best representation that we could have for the rodeo. We are excited about Taylor being crowned this evening and know that she will represent our community and the sport just as well.”