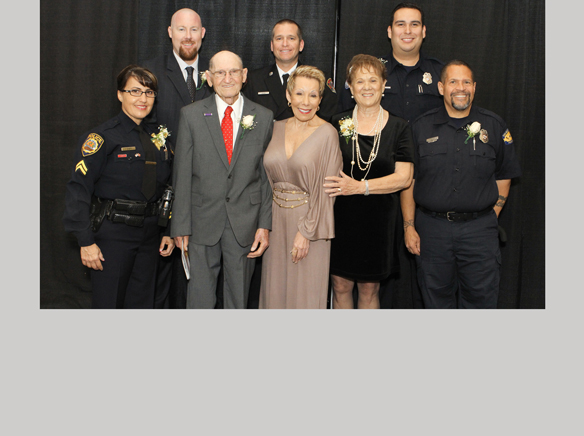 The La Mesa Chamber of Commerce is not only about the business of business. The organization also celebrates those living and working in La Mesa, whose public service efforts assist in keeping the East County city a safe, healthy and prosperous place for making a home or building an enterprise.

The La Mesa Chamber of Commerce is not only about the business of business. The organization also celebrates those living and working in La Mesa, whose public service efforts assist in keeping the East County city a safe, healthy and prosperous place for making a home or building an enterprise.

Mary England, president and CEO of the La Mesa Chamber of Commerce, introduced the formal presentation portion of the evening’s festivities. She said of the honorees, “These people we acknowledge tonight make our community strong.” She cited the lives they had saved, noting that these are “people who serve our community.” Speaking on behalf of her organization, England said, “We are thrilled as La Mesa Chamber of Commerce to honor these heroes.”

First among those honored were two paramedics from American Medical Response. Jon Alva has worked in the East County community for more than three years. Last year, Alva and his partner responded to a life-threatening accident, in which a critically injured motorcyclist had sped into the back of a semi-truck. Alva was noted for his strong communication, clinical skills and knowledge, which kept the motorcyclist alive for transport to a trauma center. The accident victim is currently recovering, with hopeful prospects for a return to normal life.

Another AMR paramedic, Robert Ivery, was second to be called to the stage for recognition. He walked slowly, using a cane because he had been injured on a medical response. Ivery has been on thousands of responses during his career, and he is senior field training officer in his group of East County paramedics. He was recognized for his respect, kindness, enthusiasm and energy. In a brief interview before the ceremony, Ivery said that he was “most honored to be serving the community of La Mesa,” which he has done since 1989. He has been training other paramedics for more than 20 years. He mentioned as his greatest challenge teaching younger public safety officers “we’re here for the people, and they’re not here for us.”

From the La Mesa Fire Department, Captain Dave Hardenburger, another public safety veteran of more than 20 years, was a third honoree. Hardenburger was praised for his situational awareness and decision making last August, when Hardenburger and his crew had been dispatched to a disabled elevator rescue of trapped passengers. While responding to that incident, Hardenburger heard dispatchers sending another fire engine to a nearby emergency, for an 18-month-old child who was not breathing. After checking that no distress threatened those stranded in the stuck elevator, Hardenburger diverted his crew to provide care for the infant. Once on the scene, Hardenburger performed the Heimlich maneuver on the child, dislodging a grape from the baby’s airway, and then did CPR. The youngster, now 2 years old, healthy and happy.

England next asked La Mesa’s new Chief of Police Walt Vasquez to introduce the following four honorees, all affiliated with the police department. England called the appearance a “test of fire” for Vasquez.

The chief rose to the challenge of good-natured joshing, by declaring, “We usually get there first and don’t follow the fire department.” He continued, saying the “seven heroes being honored, who also contribute to the betterment of La Mesa, by doing everything possible to make the community a safe place to live, work and play.”

First of the quartet of police department honorees was Detective Bucky Wright of the Special Investigative Unit. Vasquez noted Wright for having “put in jail the worst of the worst,” and praised his 63 arrests in cases involving narcotics possession, multiple Ford Ranger burglaries, assaults and identity theft. Wright has also worked with the U.S. Marshals Fugitive Apprehension Team and the Oceanside Police Department in capturing criminal suspects.

Master Officer Lillie Chase was recognized for her on-the-spot judgment in saving the life of a potential suicide victim, who was poised to jump from the bridge crossing the Grossmont Trolley Station. Realizing that the distraught female could easily slip from the guardrail by accident if not by choice, Chase grabbed the woman, pinning her safely against the railing. Chase, a fellow officer and a citizen were eventually able to pull her away from the edge and prevent her death.

The final pair of LMPD honor recipients were from the Retired Senior Volunteer Patrol. Nonie Beach has served with the RSVP since early 1998 and has volunteered more than 4,000 hours of time. She also participates as part of the RSVP Color Guard. Her duties have included removal of expired garage and yard sale signs, reporting of abandoned shopping carts and citation of presumably abandoned parked vehicles in violation of the 72-hour ordinance limitation.

Last but definitely not least of the honorees was Ray Rendina, who served with the RSVP for the past 18 years. As Rendina made his way to the stage, Chief Vasquez took a moment to note the Purple Heart ribbon on Rendina’s lapel.

“I cannot do it justice to how this man has served his country and his community,” Vasquez said. “He is a World War II hero.” Rendina currently serves as a shift coordinator for other RSVP members.

Before the ceremonies, Rendina discussed his earlier life. His military career involved participating in bombing missions over Japan during the war. Afterward, he moved to La Mesa in 1952, choosing his home in this “nice, friendly little city.” He said that his RSVP works helps to “keep the city clean,” and that La Mesans are happy to see the white official cars that RSVP members drive. “The public response is very appreciative,” Rendina said.

“It is a great honor to honor you tonight,” Vasquez said, shaking Rendina’s hand.

England summed up her feelings about the night in conclusion, “I was overwhelmed as I read the stories of these heroes of La Mesa we’ve honored here.”

A day of infamy remembered at the lakeside VFW