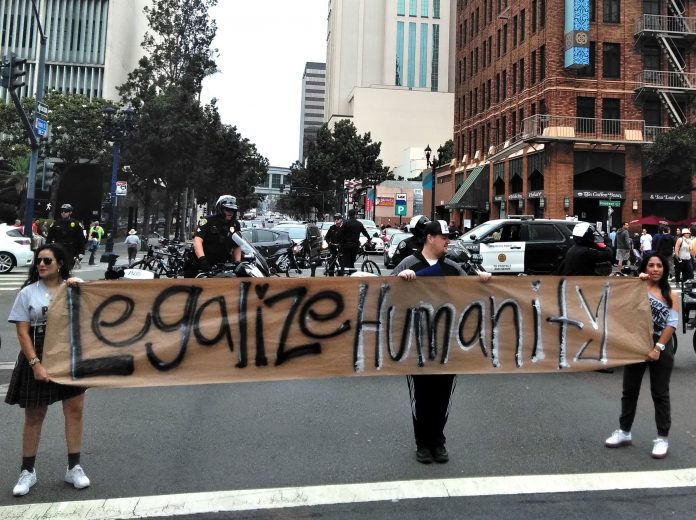 As a result of this policy, more 2,300 children of asylum seekers and refugees were separated from their parents and placed in detention camps indefinitely. The rally and the march were organized by Indivisible San Diego who gathered more than 5,000 people at the Civic Center, followed by a march down the street to the local headquarters of U.S. Immigration and Customs Enforcement (ICE).

This was one of the several protests organized throughout San Diego County on the same day, with more, similar events announced for the following weeks.

People marched in Escondido in the morning and South Bay in the afternoon, while a group of protesters occupied Otay Mesa Detention Center where a few were arrested later in the day.

Among the speakers, several politicians took a stand. Rep. Scott Peters, D-Calif., asked the protesters to hold the signs higher and reminded people that while during Memorial Day, “we celebrated the warriors who fought for our independence, our freedom and our values, today we are engaged in another desperate fight for our democracy – but today the threat is from within.”

Peters likened the current crisis to other historical abuses of liberty.

Rally-goers raised signs that read, “Kids don’t belong in cages,” “People over profits,” “Silence is complicity,” “Abolish ICE” and “Immigrants built this country,” and chorused chants about “no hate / no fear.”

Congressman Susan Davis took the microphone to thank the protesters for their advocacy.

“My colleagues and I are fighting to get the families reunited,” she said.

“There is no humanity in this,” he said. “We have to fight against this policy.”

Others at the rally held that ICE needs to be gotten rid of completely.

DACA beneficiary and attorney Dulce Garcia shared her testimony to attest to the need for change.

“So, there’s the irony,” said Garcia. “I am an immigration attorney and I am undocumented. I came here in 1987 with my mother and my siblings and I remember holding my mother’s hand for the life of me. I could have been one of the children put in cages.”

Garcia said time in the detention center was detrimental to both herself and her brother.

“His spirit was broken and so was mine,” she said. “We will keep fighting until ICE is abolished…Why should we care? We care because compassion is an American value. Immigrants’ rights are human rights.”

Twins Yarely and Aracely Duarte took the front stage to share their experience with ICE while being separated from their parents.

The Duarte twins were 12 years old last May when their parents were arrested in front of their house by ICE, leaving behind four children. “There’s one feeling that’s appropriate now, besides outrage: empathy, not sympathy,” said Duarte. “Put yourself in their shoes and think, ‘what if that would have been my child?’”

Approached later by The East County Californian for an exclusive interview, the Duarte twins shared their story in more depth.

“The first couple of minutes were complete and utter chaos,” said Yarely Duarte. “I truly had no idea of what was happening, because they were taking away my parents, my heroes, the breadwinners of our family who came to the United States so we could have a better life.”

Aracely said she is grateful for the community support.

“People who didn’t even know us went out of the way to help us,” she said. “We never truly felt alone because of God and the community that was always there.”

Despite receiving community support, Yarely said it was difficult being separated from their parents.

“It was truly terrifying and heart wrenching not to be able to see my parents every day,” she said. “Sometimes I would hear a whistle and be like, ‘Oh, that’s my dad, he’s coming home from work.’ Then I remembered he is in prison.”

Mark Lane, a pro-bono attorney for immigrants and refugees through his organization, Poppa’s House, recalled how he received a call that day from the twins’ older brother, Francisco, to seek help.

The Duarte mother spent four months incarcerated and the father was detained for seven months.

Lane said they are both in removal proceedings now, risking deportation, but that he hopes to help them obtain a green card.

The Duarte twins said they refuse to feel defeated.

“It’s important to be able to take a bad situation and turn it into something good and helping others,” said Aracely Duarte.

Marketa Hancova, former Dean at Platt College and now a music professor, marched with her immigrant husband and their daughter.

“I am an immigrant myself,” said Hancova, who fled communist Czechoslovakia in 1987. “I came with nothing and this country allowed me to build a beautiful life and I think all immigrants should be welcomed to contribute to this wonderful country with diversity, different traditions and heritage and make us stronger and better.”

Officers at the protest said the event “went smoothly, with no incidents.” The last to leave the march were the Native American dancers and drummers of all ages who stayed behind to pack their ritualistic items and change into Western clothes. Soon after, the smell of burnt sage dissipated and the drums stopped, being replaced by the usual downtown noise.

City of El Cajon initiates plan to crack down on liquor...