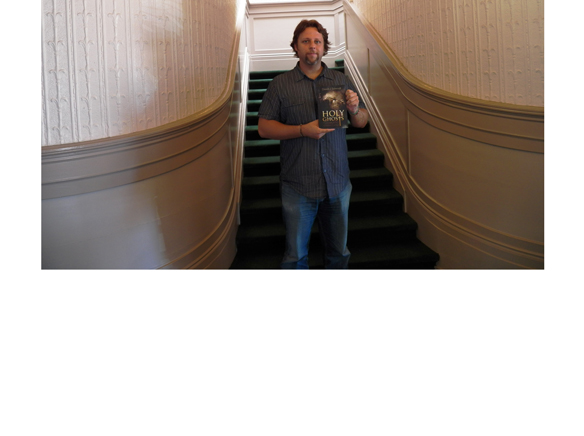 David J. Schmidt has a ghostly tale to tell—several stories of ghosts, in fact. The La Mesa author and storyteller recently completed his first serious book just in time for Halloween, “Holy ghosts: True tales from a haunted Christian college.”

David J. Schmidt has a ghostly tale to tell—several stories of ghosts, in fact. The La Mesa author and storyteller recently completed his first serious book just in time for Halloween, “Holy ghosts: True tales from a haunted Christian college.”

Schmidt acknowledged a lifelong fascination with scary stories and hauntings. Halloween was his favorite holiday from childhood forward. But, he also confessed to unconquerable skepticism about how human spirits could be trapped from cleanly exiting into whatever afterlife there may be.

That openness, coupled with hesitancy to leap to supernatural beliefs, ought to make Schmidt a perfect honest investigator of ghost stories. And readers can assess that in Schmidt’s engaging personal account of exploring reported phenomena that have no immediate natural explanation at his alma mater, Point Loma Nazarene University.

From his first days on the private Christian school campus in 2001, Schmidt said he began hearing “a lot of strange stories” about unusual occurrences. He was intrigued enough to pursue more information. Despite his initial doubts, “trustworthy” first-hand reports from security guards and custodial staffers who often found themselves alone or perhaps not alone at all, in the school’s century-old buildings at night struck Schmidt. His brother was one of his informants, as well as a former police officer.

Tales told of overheard moaning behind a door, when nobody was present. Windows sounded as if fists were striking them, when no one could have been outside. And once, an overnight guard secured Cabrillo Hall tightly before circuiting the campus roadway for the night, only to find on his return back around that all the hall’s doors were open. Schmidt described his research into these reports of possible supernatural events in his book. On an initial investigative foray at the campus theater, a photograph showed an orb behind Schmidt after the theater’s door handle mysteriously turned back and forth of its own accord.

The first half of Schmidt’s book examines ghost stories from around the world. The second half delves into the particular truth about the history of the Point Loma campus. Schmidt asked such serious questions as can belief in ghost stories be compatible with a religious or scientific worldview.

With the first stone lain now the university’s campus sites in 1897, during groundbreaking, Theosophists ceremonies held fashioned a commune these occultist spiritualists. Their leader, according to Schmidt, was a “benevolent dictator” in the form of Madame Katherine Tingley. With its heyday during the early 1900s, this sect waned during the 1920s, falling into major indebtedness. By 1940, the last bit of on-site property sold.

The building now called Cabrillo Hall was Tingley’s specially designed house, featuring a notorious central stairway of very short “tiny steps,” supposedly for use upon her reincarnated haunting of the residence as a cat or turtle.

Can the building actually channel psychic energy, as was claimed? Could the black magic, which Tingley is rumored to have practiced, left behind ongoing manifestations of apparitions as “a residue of the past?” Schmidt asks these questions himself. Or could the best explanation be couched in more scientific terms, as a rupture in the quantum fabric where the past, present and future commingle sufficiently to be currently perceptible.

Schmidt reached no firm conclusions about the existence of ghosts, but instead countered the “iron-clad certainties” of the spiritualists who believe they know everything about ghosts. Of the confirmed skeptics, there were those that believe no supernatural occurrences can be observed and the “saints” who believe that any such events arise from demonic forces of evil. Schmidt also pondered whether the current-day telling of ghost stories could be the modern version of traditional folklore. Including why living humans seem compelled to dwell on and recount these tales from the “dark unknown.” He ended by cautioning that people should regain humility over their “limited perspectives” and deepen their appreciation for those tantalizing mysteries in life.

Schmidt, who speaks nine languages, has worked as a translator. He visited 29 countries around the world and spent the last decade collecting international ghost stories. Schmidt’s other recent publication is a Spanish language collection of horror stories set in Russia, “Mas frio que la nieve” (“Colder than the snow”). His next project will be a set of eBooks, each 50 to 60 pages long, focusing on folk legends, “Tiny Staircase Series.” More information on his publications and one free eBook now available for download can be found at Schmidt’s website holyghoststories.com.