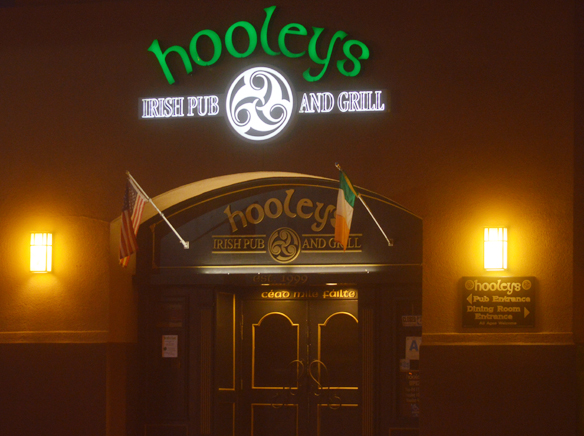 After 15 years and two locations in Rancho San Diego and La Mesa, Hooleys Irish Pub & Grill is celebrating its local and International fame to success in time-honored Irish style. It recently claimed the International Irish Pub of the Year award.

In October, owner Craig McDonald flew back to Dublin for the Irish Pubs Global conference, with hundreds of pub owners from around the world. McDonald did not know about the nomination of his pubs.

After 15 years and two locations in Rancho San Diego and La Mesa, Hooleys Irish Pub & Grill is celebrating its local and International fame to success in time-honored Irish style. It recently claimed the International Irish Pub of the Year award.

In October, owner Craig McDonald flew back to Dublin for the Irish Pubs Global conference, with hundreds of pub owners from around the world. McDonald did not know about the nomination of his pubs.

“It was such a surprise,” he said. “I was calling and texting everyone and it was the crack of dawn here.”

Young and travelling abroad McDonald fell in love with the pub culture in Ireland and England where at night families would gather together at the local pubs. He said it took years but the time cam when  he was asked to move his Round Table Pizza business across the street from the new center in Rancho San Diego.

But he had other plans.

At that time, Guinness had an Irish pub start-up concept.

“I contacted Guinness and they were fabulous,” he said. “They had a study tour in Ireland that I signed up for, went to Connecticut to work on menus and design concepts, signed the lease here and opened up in 1999.”

McDonald said nobody had ever had the perception to place this type of pub out in the suburbs and prior to this they were all located in downtown metropolitan areas. He said Guinness was anxious to see how well this model worked.

“We were ahead of our time,” he said. “Typically these places in metropolitan areas do 80 percent in liquor sales, but since the day we opened we have maintained 55 to 60 percent sales in food. We totally break the norm. We take a lot of pride that we are known more as a restaurant than a bar.”

In celebration of its 15th anniversary, on March 13, Hooleys is opening its doors at 7:30 in a public “thank you” to all the people that have made Hooleys successful over the past 15 years. As part of this ceilidh, traditional Irish meals, like its fish and chips, corned beef and cabbage, shepherd’s pie and its inventive corned beef tacos  prices are rolling back in time. There are roll back specials going on through Sunday, March 16.

Linda Aiken, operations manager, said that the party includes a live band, raffle prizes and the Imperial 20-ounce pints of Guinness for $4.50. Guinness will be there to etch pint glasses for customers in commemoration of the event.

On St. Patrick’s Day, Hooleys is doing two things. At its Rancho San Diego location it will open its doors at 10:00 a.m. as normal and family oriented, but at 5:30 will be transitioning to 21-years and up, with three live bands and a bar outside as well. At its La Mesa location, its annual Hooleyfest will take place with one bus transporting people back and forth between 5:00 and 8:00 p.m.

Hooleys has a large arrangement of traditional Irish dishes, and in a chef’s choice, some of Hooleys’ signature dishes were served.

Corned beef tacos are a hard sell for the average corned beef lover, but at first bite, I became a believer and understood why this is one of Hooleys most asked for dishes. Unlike most corned beef, stringy, fatty and salty, the beef used at Hooleys is prime beef, slow cooked all day and perfectly seasoned. An original and award-winning dish, complete with its homemade salsa, the combination of raw cabbage, corned beef, cheese and salsa is an experience, not just a meal. It takes corned beef to an entirely new level and would recommend the brave and daring to give it a try. Odds are you will never look back, gaining a new taste for corned beef never imagined. This is a brilliant dish in design and taste.

Hooleys’ fish and chips are made with large, flaky filets of Alaskan Cod and fried to golden perfection. Its batter is light and crispy, opening up to large chunks of delicious cod. It taste as if it came from the motherland itself and comes with tarter sauce, but is not needed. I found the fish to be quite the treat standing on its own with no garnish necessary.

Just as tasty and fried to a golden crunch is its ever-popular fried calamari. It comes with both cocktail sauce and a sweet chili sauce. I cannot speak for the cocktail sauce, as I could not stop dipping into the chili sauce. It had a slight kick that complemented the calamari, without the after burn. And the best thing, other than the taste of these fried delights, is that neither of them was greasy from the fryer.

Hooleys’ Kilkenny salad was a cool treat in between the main course dishes. Its assortment of greens, pine nuts, red onions, cranberries and tomatoes made a pleasing blend of tastes, and its balsamic dressing complimented it all, not overpowering the salad into one flavor.

Topping off the evening was Hooleys’ butterscotch bread pudding. Moist and sweet, it is a rich dessert without being heavy. It was the perfect ending to a great meal.

Hooleys’ atmosphere is informal, family oriented and the restaurant is separated from the bar only area. It has the neighborhood feel of a local pub, without all the hype and money of a metropolitan counterpart.

With two locations, it is easy to find and to see Hooleys’ full menu, specials and events go to www.hooleys.com.