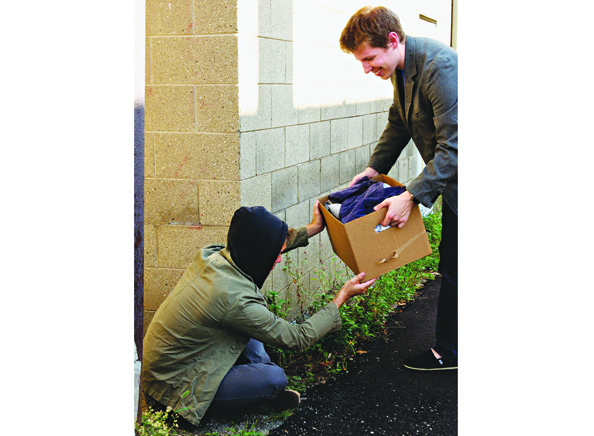 The city of La Mesa launched the first phase of their new Homeless  Outreach and Mobile Engagement program in which an outreach worker and a mental health clinician will be dispatched on non-emergency police calls involving homeless individuals on Nov. 1.

La Mesa Police Captain Matt Nicholass, who spearheaded the program said it is mirrored off a Eugene, OR. program called CAHOOTS that “pulls officers off of having to deal with social issues that are non-criminal in nature” and it gives a responding individual time to fill gaps between social services.

The first phase of the program will last approximately one year and  utilize a non-profit homeless outreach organization called People  Assisting the Homeless, or PATH.

About six months into the program, Nicholass said, leaders will begin  taking lessons learned from the non-profit PATH group to build positions for the La Mesa Police Department-based HOME program.

“We wanted to take the uniformed officer presence off as much as  possible and send someone with a social service background,” Nicholass said.

Nicholass described a program that is developmental and flexible— lessons learned over the first year in utilizing the PATH outreach group will pave the way for similar, permanent positions based out of the La Mesa Police Department beginning late 2021.

“We have some milestones we’re going to track in phase one, piggybacking on data the outreach group has gathered, evaluate approach on a monthly basis, look at the number of individuals who accept services and change some response calls, methods of triaging” to ascertain when calls need an officer or outreach personnel or both, Nicholass said.

PATH Regional Director Hanan Scrapper said although the ultimate goal of their program is to get people into housing, their approach is working with people throughout the process.

Nicholass gave a hypothetical situation where a hospitalized individual might receive care for a few days while social service workers can use that time to take a closer look at the situation and identify potential solutions to permanently get the person off the street.

“Our team is knowledgeable about all the resources that exist,  everything from housing to medicare. Where our team kind of backs off is when we do that warm handoff into a shelter; the shelter team picks up from there. What’s interesting is often, because they built such a  strong relationship with our outreach staff, individuals might still reach out to us but we loop them back so we don’t duplicate services,” Scrapper said.

The team listens to what each person’s goals are, Scrapper said, whether it is to get into local, permanent housing or family reunification in which case they ask, “who is it, can we reach out to them” and work with San Diego Downtown Partnership to purchase a bus ticket to family.

Scrapper said the local program includes elements of the Eugene program such as using a mobile response team but was born from volunteer outreach with the San Diego Regional Task Force on the Homeless.

“Where we’ve been really successful is embedding ourselves in the  homeless community, getting to know people through engagement and  successfully transitioning them to homes,” Scrapper said.

Scrapper also said the lead outreach worker planned for La Mesa served in the military for ten years and can quickly ascertain qualifications.

“We work to connect veterans with the Veterans Administration benefits division, sometimes they don’t even know if they have a service connection or what their entitlements are,” Scrapper said.

“Every time we give out a sandwich or a hotel voucher,  you know it  feels good but the need tends to circle back… We want to make sure  someone ultimately ends up off the streets,” Nicholass said.

He believes with two people operating full-time, they can “contact the individuals in a positive manner and establish a rapport with our outreach workers. ” Nicholass said.

Scrapper said she doesn’t believe anyone chooses to be homeless and outreach all comes down to trust.

“La Mesa is the first city to do this in San Diego so I think we have  some room to learn and grow— we’re really excited about it,” Scrapper  said.

Nicholass said they are trying to be entirely open-minded as they mold the program to best fit La Mesa.

“By integrating calls as much as possible, it’s going to benefit La Mesa financially, benefit the homeless individuals, and eliminate overlapping calls for service,” Nicholass said.