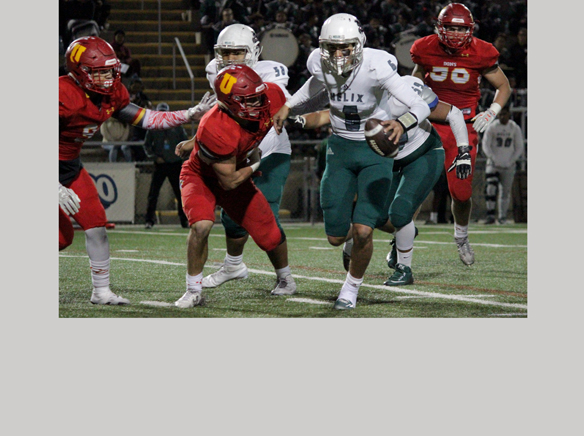 The terrible truth of high school football is that only one team gets to win the very last game. After a long, hopeful season, Helix Charter High School has finally joined the throngs of teams to hang up their jerseys for the year, just shy of glory.

The terrible truth of high school football is that only one team gets to win the very last game. After a long, hopeful season, Helix Charter High School has finally joined the throngs of teams to hang up their jerseys for the year, just shy of glory.

“Cathedral is a great football team, they’re well coached,” said Helix head coach Robbie Owens, following the 35-27 loss to the Dons. “We started fast and we finished strong, we just had that middle section where we didn’t complete it.”

The Highlanders, 2015 defending champions, did have a great start, up 14 before the end of the first quarter, but as soon as the Dons found their footing in the gravely turf of Southwestern College’s DeVore Stadium, they came back with oomph. In front of nearly 8,000 fans that packed out the venue, Cathedral’s offense pushed through to even the score at halftime and then take a commanding lead, 35-14, in the third quarter.

The Don’s offensive approach was a simple one, but Helix was missing a key component of their normally stellar defense: senior middle linebacker Ezekiel Noa.

Noa, one of the team’s best talents, sustained a knee injury during the semifinal win over Rancho Bernardo. Although he attended the game to support his teammates, he never left the sidelines.

Without Noa, the 2015 San Diego Section Defensive Player of the Season who is up for the award again this year, Cathedral rushed 427 yards against Helix.

The younger Noa said he missed his brother on the field.

“It was just good to have him here,” he said. “I could look over on the sidelines and see him there encouraging us.”

But a player like “Zeke” Noa is irreplaceable, said Owens, attributing much of Cathedral’s advances to the hole he left in the lineup.

“He was the heart and soul of our defense,” said Owens. “We had a lot of guys step up, but when you have the caliber of a guy like Zeke, there’s no way to replace a guy like that.”

With half a quarter remaining, wide receivers Scott Young and Rashad Scott and quarterback Carson Baker rallied for 13 more points before the Dons let the clock run down on the last three minutes.

Scott said, although the loss is disappointing, he is grateful to have been able to play at this stadium again.

“To be here, I just want to thank God,” he said. “The past few years we’ve been here, we’ve been in this stadium. This year, I played my heart out. It would be an honor to play here next year. We’re going to work as hard as we can to get here.”

It was a challenging season for the Highlanders, said Scott, but at the heart of all things they remain grateful.

“We had coaching changes, we had a young team, but we made it here and that’s all that matters,” he said.

Dry eyes were hard to find as the clock ran down on the last game of Helix’s season. Owens, who has now completed his first season with the team, said the end of high school football every year is especially bittersweet.

“It’s just hard,” he said. “This is a hard time of the year for high school coaches because of those seniors. Even for me just being here one year, those guys mean a lot. And high school football is more than just football, it’s a lot of life lessons.”

Owens said he does not expect Helix to be down for long.

“When I came into it, I knew Helix wasn’t broken,” he said. “I’ve learned as much this year as I’ve learned in twenty years of coaching. It’s a great place with great people. I’m excited about continuing it and working to make it better. I told the kids that I expect to be in this game every year. I expect to win it and win two more. My goal is to be in CIF State Championship every year, so we’re going to work towards that.”

Grossmont alumnus is a rock star on the mound and on...