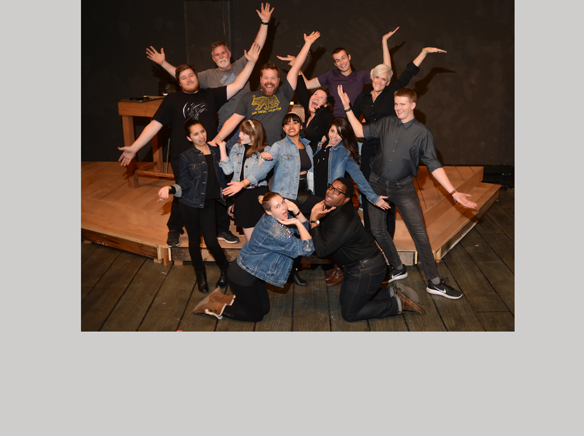 American women’s entry into new and different workforce roles has produced much debate, analysis and art. On Dec. 1, Grossmont College’s Theatre Arts Department opening night presented a play based on the real history of women who began working during the 1920’s, remunerated at what was then considered very good female worker pay, for painting clock and watch dials with radium-based paint that glowed in the dark.

American women’s entry into new and different workforce roles has produced much debate, analysis and art. On Dec. 1, Grossmont College’s Theatre Arts Department opening night presented a play based on the real history of women who began working during the 1920’s, remunerated at what was then considered very good female worker pay, for painting clock and watch dials with radium-based paint that glowed in the dark.

The story behind these events is enlightening but not light, however. Attendees may be troubled over what transpired but they will not be disappointed with the play. Playwright Melanie Marnich penned the compelling script depicting this history, titled “These Shining Lives.” The play’s director, Grossmont College instructor Beth Duggan, who chairs the Theatre Arts Department, introduced the performance on opening night. This is the true story of four women who bonded as co-workers and ultimately as close-knit friends while working at the Radium Dial Company in Ottawa, Illinois. And later, as each of them developed serious degenerative medical conditions, these women supported each other in fighting for justice to rectify the damage their work had inflicted on them.

Narrator and lead character in the play is Catherine Donohue, a simple, loving wife and mother who sought work to benefit financial circumstances for her family, which consisted of her husband and young twin son and daughter. Delia Mejia carries the role with the dignity and gracefulness befitting portrayal of a workingwoman who rises to heroic strength as her employment ordeal and physical suffering worsen. The three factory “radium girl” colleagues she joins as the play’s events unfold are the gentle Pearl (enacted by Ellen Adkins), the moralistic Frances (Laura Jimenez), and the Roaring 20’s adventurous Charlotte (Jillian Jones). As Donohue dons her protective work smock on her first day, her experienced co-workers explain the “lip, tip, dip” procedure for making a fine point on the brushes used to adorn watch-face dials with numerals and markings. Unsuspected and undisclosed was that placing the radioactivity-laced paintbrushes into their mouths would prove harmful — and, for some of them, deadly.

The play reflects this performance season’s Grossmont College Theatre Arts Department’s chosen overarching theme of strong women, who struggled even as they made significant contributions to improving others’ lives. Opening night attracted a packed-house, all-ages audience ranging from college students to seniors.

The 100-minute play is being staged without an intermission. The spare set, simplicity of costuming and barebones acting cast of seven performers enhance depiction of the austerity of the World War I and Great Depression era during which these events occurred.

All of the college-student cast members were skillful, confident and impressive during the opening night performance. The cast performances and staging overall were very accomplished and professional. Jones, as Charlotte, was notable for enacting another particularly memorable character alongside Mejia’s Catherine. Kian Kline-Chilton ably and warmly portrayed the central character of Tom Donohue, Catherine’s husband, and in turn also a pair of doctors who pronounced differently on the benefits versus the fatal consequences of prolonged exposure to radiation from the radium paint. Samuel Bennett enacted the roles of work supervisor Mr. Reed, a radio announcer, the company doctor, the Donohue son, and attorney Leonard Grossman. Charly Montgomery rounded out the cast as a reporter describing the events and as the Donohue daughter.

Metaphors of shining lights and time are woven throughout the script’s narratives. Period musical songs, mostly melancholy, set the pre-show mood before the performance began and served as “radio” background entertainment during the play.

Delightful work experiences that began as a seeming “fairy tale,” with the radium girls sparkling and glowing in the dark, turn foreboding as lengthy worksite exposure causes the radioactive paint to become permanently embedded in erratic patches under their skin, shown frighteningly on stage with a quick lighting change. The Radium Dial Company doctor assured these young women that their inexplicable physical complaints were “normal” problems and could be alleviated with aspirin or enemas. Sometime later, the company issued official letters to employees stating that the company was dedicated to keeping their working conditions entirely safe and healthy. But when one after another of these working girls fell ill and disabled, missing workdays and becoming less capable of fine painting, the company fired them.

The Radium Dial Company was such a well-regarded business in their community that the four lead characters of the play had to locate an honest, science-based physician from Chicago to accurately diagnose their ailments and provide treatment for permanent consequences of their radiation poisoning. And, despite understanding beforehand that they would be chastised and maligned they decided to bring legal action against the company for creating and maintaining harmful work conditions. Catherine Donohue agreed to be first plaintiff, persisting through serial courtroom trials. She died less than a month after winning her last case. These women’s courage in refusing to be cowed into silence and inaction led to many workplace safety laws that now protect employees from cavalier disregard by employers.

Evening performances of “These Shining Lives” continue on Dec. 8 – 10 at 7:30 p.m., with a 2 p.m. Dec. 10 matinee show. General admission tickets are $15 apiece. Military, senior and student discounts are offered. The Stagehouse Theatre is on the Grossmont College campus at 8800 Grossmont College Drive in El Cajon. Tickets, reservations and more information are available online at www.grossmont.edu/theatrebrochure or by phoning (619) 644-7234.