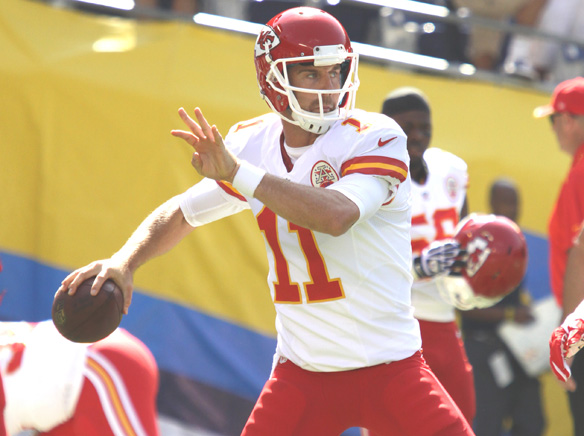 Despite Sunday’s 23-20 victory over the San Diego Chargers at Qualcomm Stadium, Helix High School alumnus Alex Smith and his Kansas City Chiefs teammates are still trying to find their rhythm in the 2014-15 NFL season.

Smith, the former Highlander star and highly decorated University of Utah quarterback, led Kansas City to an amazing 9-0 start last season and an even more stunning 38-10 lead in the AFC wildcard playoff game against the powerful Indianapolis Colts and their star quarterback Andrew Luck.

Despite Sunday’s 23-20 victory over the San Diego Chargers at Qualcomm Stadium, Helix High School alumnus Alex Smith and his Kansas City Chiefs teammates are still trying to find their rhythm in the 2014-15 NFL season.

Smith, the former Highlander star and highly decorated University of Utah quarterback, led Kansas City to an amazing 9-0 start last season and an even more stunning 38-10 lead in the AFC wildcard playoff game against the powerful Indianapolis Colts and their star quarterback Andrew Luck.

But a second-half defensive collapse fueled by injuries to key players led to one of the most amazing comebacks in pro football history as Luck and the fourth-seeded Colts stormed back from their four touchdown deficit to claim a miraculous 45-44 victory to oust the fifth-seeded Chiefs from the playoffs.

It was a disappointing ending to an otherwise stellar season for Smith and his KC teammates who had engineered one of the NFL’s most amazing turnarounds from one season to the next.

Playing in his first year with Kansas City after being traded from the 2013 Super Bowl finalist San Francisco 49ers, Smith has had a lot to do with the Chiefs’ new found success. He passed for 3,313 yards and 23 touchdowns in 2013-14. It marked the second time in his NFL career that he had surpassed the 3,000-yard passing mark.

But, without that championship ring, the season still had a hollow ring.

“It was a tough loss to a tough opponent,” Smith recalled of the playoff loss at Indianapolis. “It was a long off-season wondering about all the what-ifs.”

Smith is back for his 10th NFL season in 2014-15. Kansas City improved to 3-3 with Sunday’s win while the Chargers, seeing a five-game winning streak end, dropped to 5-2 with the loss against their old American Football League rival.

Of course, it's not necessarily how one starts the season, but how one finishes it. The Chiefs are hoping for a reversal of fortunes this season.

“I think we're in a good place,” Smith said following Sunday's morale-boosting win. “A lot of people didn't give us a chance with these last two tough games against San Francisco and San Diego on the road, but we looked at it as a challenge. If you look at the past five games, I thought we had played well. We were only a couple of plays from being 4-1 instead of 2-3.”

Smith, cheered on by a large contingent of family and friends, noted the victory over the Chargers was the first time he had won a regular season NFL game in his hometown. “It's awesome,” he said.

Smith, a NFL Pro Bowl selection last season, credited sound execution as the deciding factor in snatching the key road win on Sunday. The Chiefs scored the game-winning field goal with near flawless execution of their two-minute offense, which admittedly had struggled so far this season.

“It came down to executing on the little things,” Smith said. “We looked at what we had been doing (with our two-minute offense) last year and this year to see what we could improve on. We've got a lot of young guys. The guys made plays today.”

Of note, Smith out-dueled Chargers quarterback Philip Rivers in the victory. Rivers passed for 205 yards and two touchdowns — one each to John Phillips and Antonio Gates. However, Rivers was intercepted on the final play of the game to nail down the Kansas City win.

During Sunday's game, Smith was sacked three times but led the Chiefs to five scoring drives (two touchdowns, three field goals). He passed for 221 yards and one touchdown and no interceptions. His touchdown pass, an 11-yard completion to Anthony Sherman with 10 seconds elapsed in the fourth quarter—put the visitors up 20-14.

Kansas City moved to 1-1 in divisional games. With 10 regular season games remaining, the Chiefs still have control over much of their own destiny.

“We're hoping this is the start of something we can keep going the rest of the season,” Smith said.

The Chiefs next host the St. Louis Rams on Sunday, Oct. 26, in an inter-conference game.

He subsequently attended the University of Utah where he, by his own admission, grew into the game. Smith passed for 5,203 yards and 47 touchdowns during his career with the Utes, primarily compiled during his final two years. He also rushed for 1,072 yards and 15 touchdowns.

As the Mountain West Conference Player of the Year, he finished fourth in voting for the 2004 Heismann Trophy.

He led the Utes to victories in both the 2003 Liberty Bowl and 2005 Fiesta Bowl.

The No. 1 pick by the 49ers in the 2005 NFL Draft, Smith overcame a rough start in his rookie NFL season that saw him throw just one touchdown pass against 11 interceptions to lead San Francisco to the upper echelon of the league in later seasons with the club.

He enjoyed his strongest statistical season of his career in 2011 in leading San Francisco to the NFC championship game against the New York Giants. He led the 49ers to a 13-3 regular season record and five come-from-behind victories, including four on the road. He passed for more than 3,000 yards with a 90.7 quarterback rating.

However, his career with the 49ers effectively ended during the middle of the 2012 season when he suffered a concussion and was replaced by then back-up quarterback Colin Kaepernick. Despite being medically cleared to return to active duty, Smith never regained the starting position. Kaepernick started the remainder of the 49ers' games, including the playoffs and appearance in the Super Bowl championship game against the Baltimore Ravens.

Smith entered this season having passed for 17,593 yards and 104 touchdowns in his career. Last season, his first with the Chiefs, he recorded single-season career highs for most passing attempts (508) and most pass completions (308).

The Chargers, who entered Sunday's game with the best record in the AFC this season, dropped to 5-1 against AFC opponents, 2-1 in division games. San Diego plays a key divisional game at Denver on Thursday, Oct. 23, with the Broncos now occupying sole possession of first place in the division standings with a 5-1 record, followed by the Chargers at 5-2 and the Chiefs at 3-3. The Oakland Raiders continue to bring up the rear in the AFC West at 0-6.

Jamaal Charles led the Chiefs with 95 rushing yards on 22 attempts, scoring one touchdown, while Dwayne Bowe led KC receivers with 84 yards on five catches. Rookie place-kicker Cairo Santos kicked field goals of 28, 40 and 48 yards, with the latter standing as the game-winner.

For the Chargers, Gates finished the game with three catches for 61 yards and one touchdown while rookie Branden Oliver led the Bolts with 67 yards on 15 rushing attempts. The Chargers only totaled 69 rushing yards in the game.

Also for the hosts, Mike Scifres had five punts for 285 yards with a punting average of 57.0 yards and a net average of 47.6 yards.