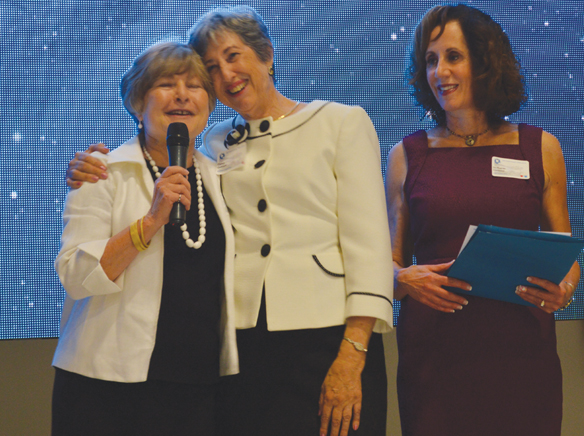 On Oct. 25, the East County Economic Development Council (East County EDC) honored its beginnings three decades ago, and the people who have helped it succeed along the way, while looking ahead to great plans for the future.

On Oct. 25, the East County Economic Development Council (East County EDC) honored its beginnings three decades ago, and the people who have helped it succeed along the way, while looking ahead to great plans for the future.

The event was hosted by High Performance Aircraft inside an airplane hangar at Gillespie Field Airport. Private planes and a DeLorean (the theme was Back to the Future) graced the event that had a futuristic feel—or maybe that was the buzz about the Aerotropolis, which will surround Gillespie Field Airport and create investment opportunities and job growth in and around the property.

The achievements of the non-profit ECEDC demonstrate the commitment to the economic vitality of El Cajon, Lakeside, La Mesa, Lemon Grove, Santee, Alpine, Rancho San Diego and Spring Valley. One of the many awards the ECEDC has received over the years is the Governor’s Technology & innovation Award, indicative of the direction East County has taken. “We have been the champions of manufacturing for the last thirty years when other people acted like manufacturing didn’t exist anymore and didn’t matter in San Diego or the United States,” said Jo Mari Dimond, ECEDC CEO/president. “There’s a new federal designation called Investing in Manufacturing Community Partnership (IMCP), and Southern California has one of only twelve in the United States. There are four counties, L.A., Ventura, Orange and San Diego, and we are the lead for the San Diego delegation.”

What that means for East County is funding, and funding, of course, means jobs.

“They needed someone to be on their Executive Board, and we volunteered. It’s to bring 1.3 billion dollars in federal funding to the various IMCP regions. We’ll have to compete for, but only those twelve regions of the United States who receive the IMCP designation are allowed to compete for those federal dollars,” Diamond said. The money, from twelve different agencies, will be dispersed among the twelve.

There is certainly no shortage of vision or energy within the ECEDC to keeping East County propelling in lucrative markets. Those markets require a strong labor force to compete, which the ECEDC currently sees in flux. To keep soaring, the East County economy needs to train a new generation of workers. The ECEDC has partnered with the United Way and the San Diego Workforce Investment Board to create a “workforce pipeline” into the manufacturing industry. “Our manufacturers, some of which are here tonight, are telling us they could grow, but they can’t grow if they don’t have skilled labor. The skilled workers they have now—machining, welding, machine operation, it’s an aging workforce. What are we doing to fill the pipeline? Do parents and kids know that manufacturing is a career path you can start in many ways, that you can start in manufacturing without going to college?” Diamond said. Aerospace and defense are also an important part of the East County economy, which is now much more diverse, according to Diamond.

The ECEDC presented Dana Quittner, founding ECEDC board member, with a Lifetime Achievement Award at the event. All of the vigor, foresight and commitment required to better East County can’t be accomplished alone, but Quittner was honored by Diamond, John Minto, and retired ECEDC CEO Deanna Weeks as a decisive, invaluable part of such success. “In life, there will be very few people who want you to succeed, but Dana does,” Weeks said about her friend and former colleague. When Quittner was told, “East County can’t do that,” she found a way to do it, due in no small part to what was referred to as her “cross-jurisdictional problem solving skills.” Quittner was a mover and shaker, and in ways she didn’t always take credit for, cultivated a beneficial atmosphere for business in East County. When accepting her award, Quittner said, “I love bringing good people together.”