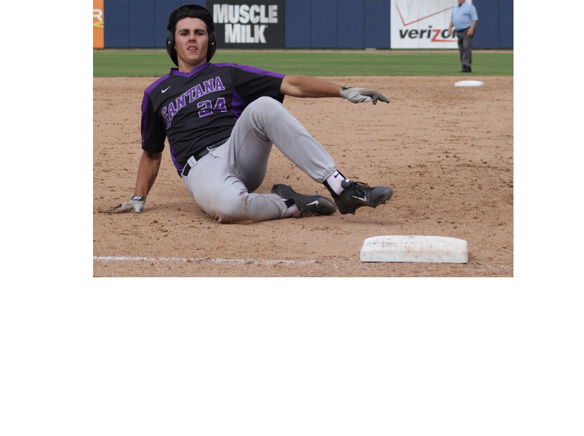 It has been a good year for East County baseball. Actually, most coaches will say every year is a good year for this particular region of San Diego, but this spring they knocked it out of the ballpark.

On May 29, 2017, the Grossmont Griffins made San Diego history by being the first community college in the county to win the California state championship. It is a victory that has been 67 years in the making, with other community colleges like Southwestern and Palomar coming close but never quite closing the deal.

It has been a good year for East County baseball. Actually, most coaches will say every year is a good year for this particular region of San Diego, but this spring they knocked it out of the ballpark.

On May 29, 2017, the Grossmont Griffins made San Diego history by being the first community college in the county to win the California state championship. It is a victory that has been 67 years in the making, with other community colleges like Southwestern and Palomar coming close but never quite closing the deal.

Grossmont head coach Randy Abshier said the win was a great honor, but that he and his team knew it was coming.

“It wasn’t even in the back of our minds, it was on the forefront all season,” he said.

The Griffins had a lot of returners from last year’s squad, Abshier said, and following their tough playoff loss in 2016, the players decided to take it all the way this year.

“They looked at me, no one had tears in their eyes, and they said ‘we’re going to win it next year,’” said Abshier.

Stacked with skill, this season’s roster of Griffins was a treat to work with, said Abshier.

“They were an easy team to coach because of the talent on the field.”

Much of that talent comes from East County high schools like Granite Hills, Valhalla, Helix and West Hills. High school ball players who do not get scooped up by colleges or MLB scouts find themselves batting away at community colleges looking for scholarships or another chance to get noticed.

“We have a great league and it’s about time people start noticing we have a lot of great baseball in East County,” he said.

Abruzzo’s Foothillers have had a stellar season as well, finishing off their 19-14 record with a section title in Division I. They won their championship game against Francis Parker 8-3, making the most of the larger-than-life venue at Fowler Park, University of San Diego on June 2, 2017. Replete with the breath-taking plays and nail-biting comebacks, the championship game was also a parade of the best in baseball comedy — moments like first baseman Jesse Garcia getting stuck upside down between the outfield fence and the field tarp in an attempt to catch a foul ball, or pitcher Jackson Hulett stealing third base after a kerfuffle at second with his helmet and glasses in his hands outstretched in front of him as he slid haphazardly onto the plate.

Scrappy though they may be, the Foothillers know how to play the game, said Abruzzo.

“We don’t have a ton of D1 guys or draft picks or big time guys,” he said. “But we have a lot of good high school players who bought into the process and played really hard, came together as a team and won a championship.”

Helix in the Open Division and Santana in Division II joined Grossmont in the battle for a section championship title. Granite Hills, last year’s defending champions, fell in Division I semifinals to Francis Parker after a tiebreaker round. It is an impressive showing from the Grossmont Conference, said Helix head coach Cole Holland.

“I think [Grossmont Conference] is the best in the county,” he said. “We see that year in and year out. I think you can look at this year and at the last 20 years and there’s usually an East County team playing for a championship. If that doesn’t tell you that we’re the best league, I don’t know what will.”

East County sees a lot of its baseball players off to universities on scholarships, and even a handful that go directly to play pro-ball. The Phillies drafted Granite Hills pitcher Andrew Brown last year. His co-captain on the mound, Dillan Shrum, went to play for University of Nevada. This year’s high school seniors are making the same choice: college or pros? Hulett is headed to Saint Mary’s College of California in the fall. Santana Sultan Noah Nunez has committed to San Diego State University, despite getting attention from scouts, and he will be joining a handful of other East County gloves who now call themselves Aztecs.

With between scholarships and the draft, the pool for community colleges is drying up, said Abshier.

“The recruiting process gets started earlier and earlier,” he said.

But, he added, the Griffins are still committed to winning state championships, just as they are committed to transferring their players off to good schools to finish their education. Abshier said they are already looking for the next batch of ball players who will help them continue the brand of quality baseball that Grossmont College hopes to be known for.

And he will not have to look far. In Hulett’s words, “East County runs San Diego baseball.”