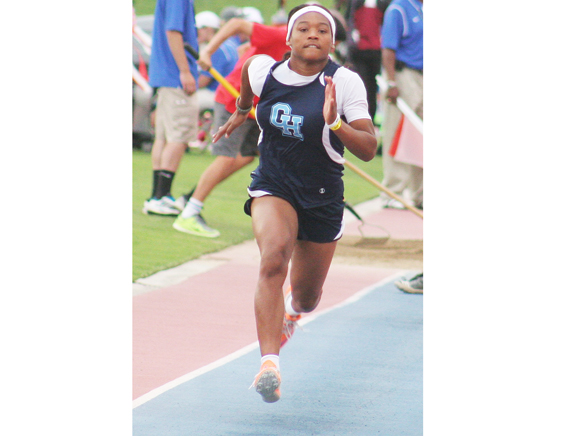 Interestingly, both student-athletes ended the season by competing in the state track and field championship meet the first weekend in June in Clovis.

Harvey capped her four-year basketball career for the Lady Eagles by helping lead them to an appearance in the Division I semifinals. She received first team all-section honors during the winter sports season after averaging 15.7 points, 8.2 rebounds, 5.4 assists and 6.3 steals per game.

She also utilized her speed and quickness in track and field by turning in the section’s top-qualifying marks for this year’s state meet in both the long and triple jumps. She posted season-best efforts in both events – 18-8 in the long jump and 39-0.75 in the triple jump – to win both events at the section finals.

Granite Hills, seeded ninth in the Division I field, proved overachievers in the girls basketball playoffs thanks to Harvey’s on-court leadership. The Lady Eagles recorded upset wins over eighth-seeded Ramona, 49-34, in the first round and top-seeded Poway, 37-34, in the second round before ending their season with a 74-69 loss to fourth-seeded Mount Miguel.

Mount Miguel would go on to place second to Horizon Christian in the division championship game.

Miller, an all-section first team defensive back who will continue his career at the University of Washington, capped his prep career by capturing two medals at the state track finals – fourth in the long jump (23-2.5) and sixth in the triple jump (47-4).

Shearin received the top boys academic honor with a 4.644 weighted grade-point average. He will attend Dartmouth where he will play running back and slot receiver for the college’s football team.

Shearin scored four touchdowns in a 49-34 first-round playoff win over Horizon Christian in last fall’s Division IV section playoffs. He finished as one of the section’s rushing leaders with 1,527 yards and 18 touchdowns.

On the basketball court, Ellis helped guide the top-seeded Braves to the Division II section championship with a 61-49 victory against the second-seeded Valhalla Norsemen.

El Cajon Valley ended its season with a 25-7 record following a 46-33 loss to Corona Del Mar in the ensuing Southern California regional playoffs.

The Hall of Champions also released its spring all-section teams at the conclusion of the 2014-15 school term.

Tausaga, who went on to claim a bronze medal at the state finals, was named the section’s female field athlete of the year.

Salazar set a new section record in winning the100 butterfly (48.50). Nowaski, a three-time double event champion, received further honors after being named the section’s female swimmer of the year.

Pulido won the compulsory all-around title at the section finals while Miller placed second.  Cazares won the parallel bars; Scruggs came out on top in the optional floor exercise.

Cancer survivor Simone has Monarchs roaring on the wrestling mat