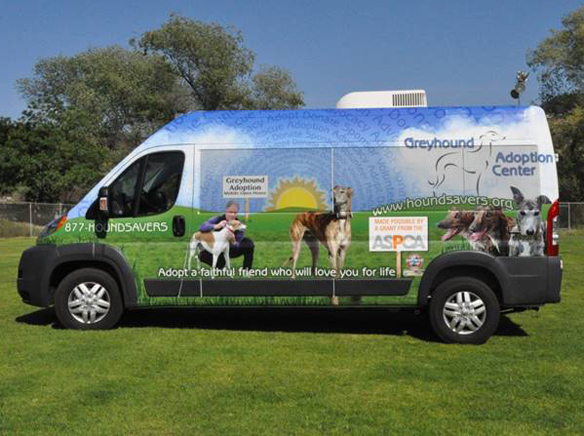 Dozens of retired racing greyhounds in San Diego will be riding in style starting as the Greyhound Adoption Center (GAC) rolled out its new rescue van thanks to a generous grant from the ASPCA® (The American Society for the Prevention of Cruelty to Animals®) and donations from supporters.

Dozens of retired racing greyhounds in San Diego will be riding in style starting as the Greyhound Adoption Center (GAC) rolled out its new rescue van thanks to a generous grant from the ASPCA® (The American Society for the Prevention of Cruelty to Animals®) and donations from supporters.

“This new vehicle is a tremendous asset to the organization, essentially acting as a moving billboard for pet adoption,” said GAC Founder and President Darren Rigg. “This new tool gives us the ability to travel across the country when called upon to rescue more dogs living in dire situations with the confidence that the animals and our volunteers are safe and secure.”

The new van was purchased at a discount from Carl Burger Dodge Chrysler Jeep Ram World in La Mesa. “It was a privilege to work with Greyhound Adoption Center; we are glad to be associated with them,” said Jeff Turner, commercial business sales manager.

The Greyhound Adoption Center rescues up to 150 greyhounds and greyhound mixes a year. Rigg and his dedicated team of 200 plus volunteers have no plans to slow down after nearly 30 years of rescuing hounds from around the country.

“It is still surprising that people don’t know how good ‘greys’ are as pets. There are about 20,000 of them still racing in this country, so that’s a lot of 45-mph couch potatoes in need of forever homes,” said Rigg.

The public can follow the latest greyhound rescue efforts via Facebook, You Tube, Flickr and the GAC website (www.houndsavers.org). Anyone can instantly sponsor a newly rescued dog via the website and purchase food, toys, bedding or medications. Monthly sponsorships and yearly memberships are also available.

Since 1987, the non-profit Greyhound Adoption Center (GAC) has found loving homes for nearly 6,000 retired racing greyhounds and greyhound-mixes from across the U.S. Up to 150 greyhounds a year arrive at its kennel near San Diego, Calif. to be nurtured and rehabilitated on the way to finding forever homes. Staff and volunteers help feed, bathe and exercise the dogs with some requiring extensive surgeries to repair injuries suffered on the racetrack. Funded by generous grants, member dues and sponsor donations, GAC has grown to become one of the world’s largest greyhound rescue organizations.