There still isn’t word on whether the San Diego Section or the California Interscholastic Federation will hold post-season tournaments, but the high school wrestling season has faced off for local East County teams. 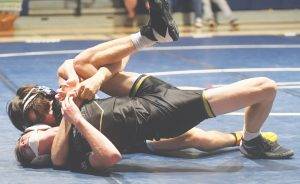 The Eagles entered Thursday’s dual against the West Hills Wolf Pack with a 2-0 league record. League dual meets continue through May 13, followed by a coed league championship tournament on May 15 at Granite Hills High School.

The section divisional championships, should they happen, are scheduled May 29. Sites are to be announced.

Eagles head coach Jesse Sheard said it’s been a great experience just to be back on the mat during these trying times that has kept many student-athletes idle for the past year because of the COVID-19 pandemic.

“We have a great group of kids who have wrestling experience,” Sheard said. “We have novice wrestlers and the older kids have taken them under their wings to get them to where they are now. You’ve got to have faith that it’s going to pay off.”

Granite Hills defeated visiting Bonita Vista, 69-6, in the teams’ non-league encounter on April 24. The Eagles won 12 of the 13 matches, including seven by pins and another four by forfeit.

Seventy-eight is the most points a team can score in a dual meet, so the hosts were near perfect on the day.

“This dual meet showed the kids that they did their work during the practices,” Sheard said. “They didn’t take time off. We just tried to keep it simple.”

Zach Waterhouse won an overtime match, 11-9, with a takedown seven seconds into the sudden-victory period while Keagen Kroeger (160), Kyle Fellows (171), Nicolas Casillas (220) and Logan Ransdell (285) all won by forfeit.

Corella turned in the fastest pin with 0.3 second left in the first period.

Should the divisionals take place, Granite Hills would participate in the Division II tournament. Sheard said an expectation would be to finish among the top three teams.

The next step forward would be to compete in a sectionwide state-qualifying tournament.

“We don’t know if there will be a state tournament, but we would love to have some state qualifiers,” Sheard said.

There are several new safety protocols this season, including the elimination of handshakes  on face-offs prior to matches and of officials raising the arm of winning wrestlers. Seating is also socially distanced for each team. 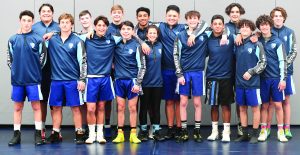