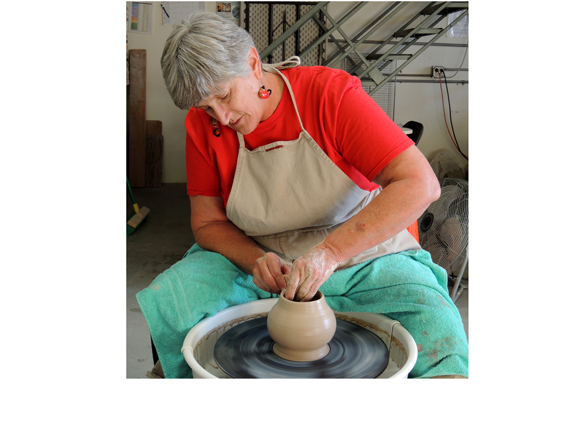 Tucked away in La Mesa’s light industrial district on Center Avenue is Get Centered Clay, a working pottery studio. On Dec. 5, owner Elly Dotseth opened her studio to the public in a holiday show and sale.

Customers admired the design and detail of the jars and mugs, bowls and plates lining the shelves. Laurel Bernstein chose a leaf platter that her friend Michele Palmer had made.

Palmer said that the platter was made with a leaf that dropped from a tree in Balboa Park.

Tucked away in La Mesa’s light industrial district on Center Avenue is Get Centered Clay, a working pottery studio. On Dec. 5, owner Elly Dotseth opened her studio to the public in a holiday show and sale.

Customers admired the design and detail of the jars and mugs, bowls and plates lining the shelves. Laurel Bernstein chose a leaf platter that her friend Michele Palmer had made.

Palmer said that the platter was made with a leaf that dropped from a tree in Balboa Park.

“I love to buy things from local artists,” Bernstein said, touching the veins of the leaf pattern.

Dotseth opened the studio in 2008. The name of the studio is a triple play on words. Throwing pottery on a potter’s wheel involves getting the mass of clay into the center of the wheel. And working with clay can be a very meditative process, Dotseth explained.

“When someone is meditating, he or she often refers to that as getting centered. So calling the studio Get Centered Clay Studio just was too perfect. It was a triple play on words,” said Dotseth, who was an English major at one time in her college days.

Her first experience working with clay was as a UC Santa Barbara student in 1973. Prior to that, as a high school student, she had visited a pottery co-op farm near Santa Cruz.

“There were lots and lots of pots, and potter’s wheels all lined up and a farm where the potters had to work to get studio time. That was what first sparked my interest,” she said.

Later she took classes through Grossmont Adult Education under Laura Peterson and visited her studio. That started Dotseth, who was a young mother by then, on her dream of opening her own studio.

To learn the ropes of the business, she began running a group called Ceramic Artists of San Diego and organized a leadership team of interested potters to create a gallery on Ray Street in North Park.

All these steps led her to opening her own potter’s studio, which offers membership for potters allowing 247 access to the space, all of the equipment needed, including kilns, potter’s wheels, clay extruders, slab rollers and other larger pieces.

The studio also has a library of educational texts for those who want to learn more techniques on their own. In addition, occasional educational workshops are held for members and the greater community.

The gallery and gift shop is available to those members whose work meets professional standards.

On the day of the sale, several of the students were on hand to show and talk about their work.

A potter since 1992, Barry Pechersky had beautiful bowls with his own signature design of a curlicue on the pottery.

Pechersky turned to making pottery full-time when he retired.

“I like the feel of the clay in my hands. This is a lifelong hobby,” he said.

Another artist on hand was Bruce Haggerty, a retired professor of art history. He had dabbled in painting and drawing but had not stayed with the craft.

But when he retired, he gave ceramics a try.

“It’s totally Zen, just being in the moment, in the creating experience. Every day, you learn how to perfect your art,” Haggerty said.

In the studio behind the gallery, 15-year-old Meghan Rhoades was busy etching faces into coffee mugs she had built by hand.

“Now I’m smoothing out the mouth of the faces,” said Rhoades, whose grandmother had introduced her to ceramics.

The studio is a joy for Dotseth to run because she has been able to connect with local artists who are grateful to be at the studio.

“I have created a community where there was none before, and I have new friends as a result,” she said.

Still, running the studio has its own challenges.

“I have had to learn to be generous, but not allow someone to take advantage of that generosity to my detriment.

“I am so fortunate to have a community of people here who have been willing to step up and take on some of the responsibility of daily maintenance and heavy labor that I can no longer do alone,” Dotseth said.

The studio has a team of people to help keep the sales gallery open six days a week.

The appeal of pottery, Dotseth believes, is the material with which it is made.

“Clay is such a basic thing really. Cultures all over our planet make things with this sticky stuff,” she said.

Haggerty smiled in agreement. “It’s like playing with mud,” he said.

The instructors at Get Centered Clay will lead students step-by-step into creating works of pottery art. Visitors are always welcome to come to the studio and gallery. For more information, go to www.getcenteredclay.com.