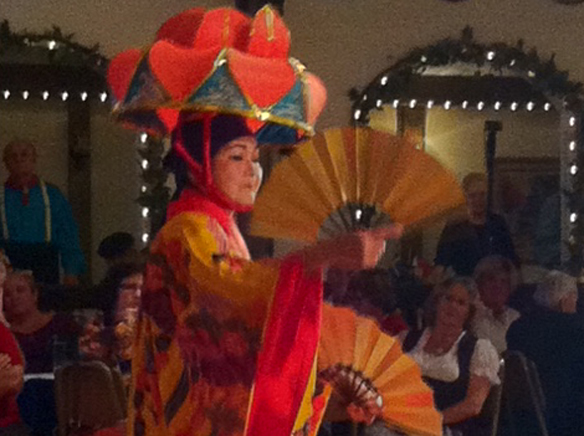 “I noticed that a lot of Polish people always turned out for our New Year’s celebration here at the Club,” said Williams. “So I got the idea that we might want to put together an event that would celebrate the wonderful and diverse heritages of the many countries that we come from.”

She said with a lot of impassioned volunteering, the evening elicited a full-house turnout and enthusiastic response from diverse folk dancers. Solomon Rojas, of The Performing Folk Dancers of Balboa Park, said the German American Societies invited us here this is a multicultural event and they were very happy to be a part of it.

“It launches our season where we perform about every two weeks now throughout the upcoming summer at different events,” said Rojas. “Additionally, we’re always invited here for Oktoberfest.”
Rojas said he and his wife, Ruth, met while dancing.

“She is also a member of the dance group and will be performing here tonight as well,” he said. “We share a passion for folk dancing.”

Marianna Roberts, German Society’s Club president, said she was elated to welcome the dinner guests and fellow traditional dance lovers. The turnout, she said, was reflective of the multicultural nature of the event, with guests from many parts of the world sharing in on the celebration.

“There are many Greeks, Italians, Japanese, Polish and people of many cultural heritages here tonight,” said Roberts. “We’re overjoyed by the response. It took many club volunteers and countless hours to make this evening possible, but we all love it and think it’s a wonderful idea.”

Referring to a vegetable salad similar to potato salad in taste and texture, Roberts said it took her and other volunteers many hours to cut all the vegetables into such delicately tiny pieces.
“There is a lot of love that went into this event–even in the cooking”, she said.

Roberts grew up in East Berlin and said she remembers the pivotal moment in her life when she was present to witnessed and hear John F. Kennedy’s famous speech that he delivered in the divided city and the emotion that it still inspires within her.

“Heidi is truly the one that is responsible for this idea,” said Roberts. “She is incredible and it’s such a great celebration.”

Roberts said the club hosts other events that include what she described as “one of the best Mardi Gras with children’s participation,” along with its famed traditional Oktoberfest and a popular New Year dinner dance.
“We now average an event each month,” she said.

The evening featured traditional German dance performances by the club’s Kindertanzgruppe which translates into children’s dance group. Long time club member Claudia Jensen said she remembers growing up with the dance teacher, Virginia Tunnel. “She and I folk danced together as kids here at the club, along with Tonja Sawicki,” said Jensen. “We all have grandkids now in the children’s dance group. We’re very excited to showcase their dancing this evening. The Kindertazgrouppe has grown in membership from six to 19 members. Tonight is the children’s maiden performance and we’re all very excited.”

Children opened the evening with a traditional Spring May Pole performance, progressing to eclectically diverse performances of a mesmerizing rendition of a Japanese dance by Kazuko Nishimura in full kimonoed and ended with well-received Tarantellas, the southern Italian traditional folk dance executed by The Performing Folk Dancers Of Balboa Park.

Dancing, dining and music in the traditional Chaldean way