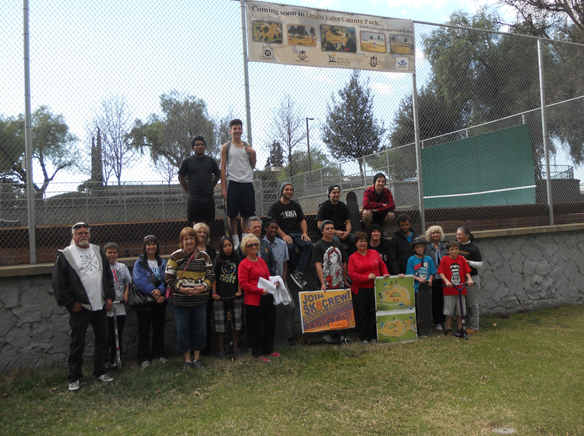 Lakeside residents were busy during Valentine’s week. For example, Terry Burke-Eiserling, one of the founders of Lakeside’s future skate park, hosted a Banner Day event, which took place on Feb. 11 for the new youth-oriented skate park which is expected to be built at Lindo Lake County Park (no completion date scheduled to date).

Lakeside residents were busy during Valentine’s week. For example, Terry Burke-Eiserling, one of the founders of Lakeside’s future skate park, hosted a Banner Day event, which took place on Feb. 11 for the new youth-oriented skate park which is expected to be built at Lindo Lake County Park (no completion date scheduled to date).

Jerry Mosier, the founding father of the Lakeside Skatepark Committee, and his club, the Highway Lions, were instrumental in hosting the meetings and getting the various community leaders together to study the feasibility of creating a skate park for our youth to enjoy. They met monthly and at times more often for two years while planning the skate park.

Attendees on hand to show their support, view the new banner and see the exact location of the skate park, included youth skaters and community clubs such as the Woman’s Club of Lakeside, the Highway Lions Club, the Chamber of Commerce, the Ministerial Association, the Garden Club, the Parks Department, the Lakeside Community Collaborative group and the Maine Avenue Revitalization Association.

Both Burke-Eiserling and Mosier concurred that the location near the tennis courts was the best place. Some trees will need to be removed and replanted. The “bowl” for skaters will be on the higher level, and the rails, sidewalks and ramps will be on the lower level. There will also be tables and benches for parents to watch the skaters.

Burke-Eiserling added that she thinks a skate park would draw more people to Lindo Lake Park and continue to strengthen what she calls a growing “community presence” there. In recent years, a farmer’s market and county-installed exercise equipment have both been added to the park. “This would be another improvement,” she concluded.

The area for the skate park is 16,500 square feet. A “shovel in the ground” groundbreaking event (not scheduled to date) is next on the agenda. Look for some of the skateboarders in the Lakeside Western Days Parade scheduled in April.

As a fundraiser, the Lakeside Skatepark Committee will be selling bricks, which can be inscribed with your name, business or club for only $100.

Also coming to Lakeside will be a Cedar Fire Community Memorial. The newly formed committee met for the first time on Feb. 13 at the Fire District Office located on Lakeside Avenue.
According to Fire Chief Andy Parr, the Fire District had set aside money left from the building fund to create this memorial. He said that the land next door to the new administration building can be used for the memorial.

The space is 90 feet wide by 20 feet deep, there is a large wall that could showcase art.
“The Cedar Fire impacted the whole community, and Lakeside suffered the biggest loss of life,” Parr said. The 10th anniversary of the Cedar Fire is coming in October and this committee plans to have a design to show the community by this coming June.