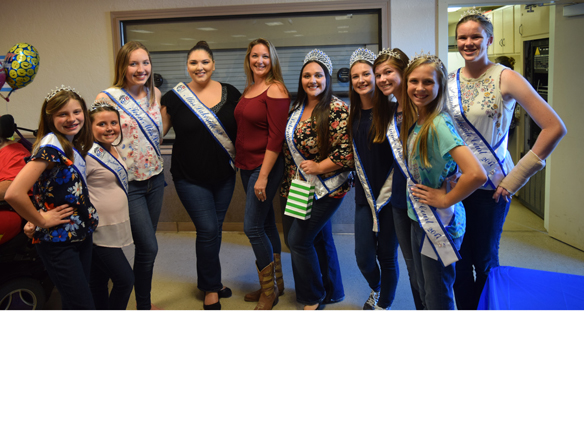 A new library is well on its way even though it is not expected to open until late 2020 or early 2021, but the community is already coming together to make this happen. On June 17, The Miss Lakeside Scholarship Pageant, both current and past came together to hold a fundraising benefit to help raise the needed community portion of the library costs at the Lakeside Rodeo Grounds.

A new library is well on its way even though it is not expected to open until late 2020 or early 2021, but the community is already coming together to make this happen. On June 17, The Miss Lakeside Scholarship Pageant, both current and past came together to hold a fundraising benefit to help raise the needed community portion of the library costs at the Lakeside Rodeo Grounds. They stayed busy during the event selling raffle tickets for some amazing donated items, serving customers the homemade spaghetti dinner prepared by Pageant Director Jill Fleming, along with a silent auction and a 50/50 opportunity drawing. Adding to the friendly Lakeside atmosphere, the Milt Cyphert Band (Brothers in Arms, as they are all veterans) played a great selection of songs from good ole’ country music to the Rolling Stones. It was great family friendly event, done the Lakeside way.

Heather Gutierrez, president of the Friends of the Lakeside Library said that the location of the new library is now a matter of public record. Acquisitions are underway and the final purchase has to be completed. There is a seven-month option agreement in which the CEQA environmental studies will be completed before going before the County Board of Supervisors for approval. Gutierrez said this should happen within four to five months before the land deal is submitted and approved.

“The land has been appraised and the sale price will be in align with the appraisal,” she said. “Then the County has a six-month option agreement and the sales contingent on those environmental studies.”

The County is purchasing two acres facing Woodside Avenue with the egress at Parkside Street as well as Woodside. The facility will be 17,000 square feet with 50 parking spaces. The total cost will be $14 million, which includes the purchase, the sign, the construction and complete furnishings for the library.

“It will similar to the libraries in Alpine and Imperial Beach, which recently opened its doors in the past couple of months, Alpine about a year ago,” said Gutierrez. Renderings of both of those libraries were available for people to look at in order to get a good idea of what the new library will look like and also be ready to make recommendations when the time comes to put in community input into what the library should have and provide for within the Lakeside community.

Naming rights for the specific rooms, like the community room, team rooms, tech rooms are going to be offered via donation at a $1,000 per square foot and it gives that donor naming rights. “We’ll be honoring them with some type of architectural design, a plate on the wall or other ideas that come up. The community room that will be the highlight with 2,000 square feet is going to be available for events for non-profits, Lakeside Clubs and anyone in the community can come and access that room,” said Gutierrez.

Right now, fundraising is at $32,000 towards the community goal of $100,000. All of the proceeds from the Spaghetti Dinner fundraiser will go directly to the new library fund.

Kids learn the love of reading at the StoryTent