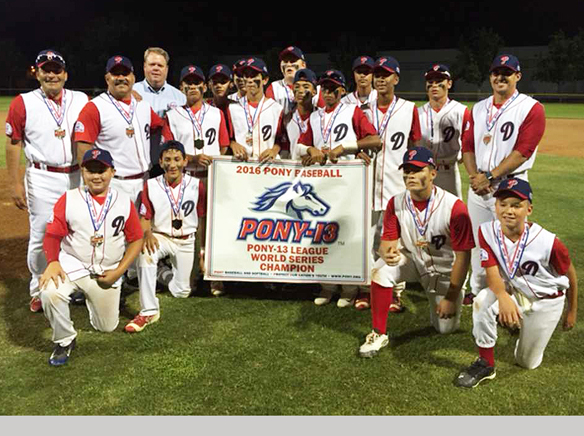 They were a year older and the venue wasn’t on the other side of the country, but for former Sweetwater Valley Little Leaguer standouts Jake Baptista, Nate Nankil and Ariel Armas, winning the Pony-13 International World Series championship was all about redemption.

They were a year older and the venue wasn’t on the other side of the country, but for former Sweetwater Valley Little Leaguer standouts Jake Baptista, Nate Nankil and Ariel Armas, winning the Pony-13 International World Series championship was all about redemption.

The trio helped guide the fortunes of Sweetwater Valley’s entry that placed third in the United States division in last year’s Little League World Series in South Williamsport, Pa.
Sweetwater Valley lost to Texas twice in the tournament: they beat every other Little League team in the United States they faced in 2015.
The talented trio lost only one game in their magic carpet ride this summer as members of the Emerald Diamond all-star team that defeated Panama, 12-0, to capture the Pony-13 World Series title Aug. 1 in Whittier.

“It was kind of a redeemer,” explained Baptista, now an eighth grader who is home-schooled. “We lost to Texas (in the game to get to the U.S. division LLWS championship game). It gave me a chance to win a World Series with Nate and Ari. That was the most exciting thing for me.”

“Last year, we were dreaming of winning a Little League World Series championship — we came close and it’s cool to win a world championship this year,” Armas explained. “It was cool to have two teammates with me (from last year’s Sweetwater Valley team). Winning this with them was great.

“It was fun. In baseball, there are so many opportunities to improve. You can’t always win every game; some games you lose. But you always have chances to do better.

“Last year we were third in the Little League World Series; this year we were first – that’s what’s exciting for me.”

“It felt unbelievable — just winning the whole thing feels great,” explained Nankil, who recently came off a stint with the 14U United States National Development Team in Cary, N.C.

“Nate helped us with his speed in the outfield and his clutch-hitting,” Baptista explained. “Ari is one of the best catchers I’ve played with. I just focused on playing good defense in center field or first base, wherever I was, and tried to follow that up with good hitting in clutch situations, like hitting behind runners.”

It added up to a memorable summer.

“It’s fun to make friendships that last a lifetime,” Armas said. “It’s cool to see yourself and your friends developing their baseball skills every day while you’re growing up. It’s a once-in-a-lifetime opportunity to be able to experience this together. We are a family.”

The three former Little League World Series standouts excelled in new horizons while playing Pony baseball. The Pony-13 level was a step up with base paths separated by 80 feet rather than 60 feet (as in Little League) and outfield fences pushed back significantly.

“The pitching was good but the hitting was more challenging in Pony than in Little League,” Baptista admitted. “Last year, we were playing on fields where the fences were 225 to 280 feet from home plate; this year the fences were 360 to 380 feet away.”

“I liked the bigger fields because it prepared you for high school,” added Nankil, a freshman at Bonita Vista High School. “Hitting was our most dominant tool.”