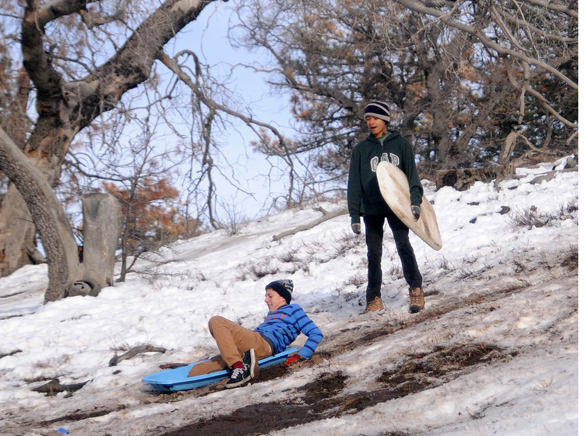 El Niño may turn out to be one of the biggest news stories in 2016 and possibly even in 2017. The tropical moisture-driven storms associated with the phenomenon can wreck havoc on coastal communities with widespread flooding from torrential downpours.

But El Niño can also provide some good-natured family fun. Besides dropping a lot of rain in the coastal plain, El Niño storms can also drop a lot of snow in California’s coastal and peninsular mountain ranges.

El Niño may turn out to be one of the biggest news stories in 2016 and possibly even in 2017. The tropical moisture-driven storms associated with the phenomenon can wreck havoc on coastal communities with widespread flooding from torrential downpours.

But El Niño can also provide some good-natured family fun. Besides dropping a lot of rain in the coastal plain, El Niño storms can also drop a lot of snow in California’s coastal and peninsular mountain ranges.

The first El Niño storm that hit the San Diego region during the first week of January, for instance, dropped 13 inches of snow in the nearby Laguna Mountains. It was not the first snowfall of the current winter season that occurred in late November, but it was the most snowfall delivered by one storm thus far.

Predictably, snow-starved urban dwellers headed straight for the mounds of white stuff to play in and frolic. In fact, so many urbanites headed up to the mountains last weekend that they had to be turned back by uniformed officers at the juncture of Interstate 5 and Sunrise Highway.

There were too many people in the mountains.

Even mountain residents had to wait two to three hours at the roadblock before finally receiving permission to travel up Sunrise Highway to their homes.

For those who were lucky to make it past afternoon roadblocks, they found a winter wonderland. Above the 4,500-foot level, everything was covered in a white blanket of snow. The snow-covered landscape extended from horizon to horizon – as far as the eye could see.

And people soon found themselves covered in white as they slid down slopes or engaged in snowball fights.

While city-dwellers were turned back in hordes on Saturday, they returned in fewer, more manageable numbers on Monday while most of their neighbors went back to work.

Jon and Julie Hammer of La Mesa brought their two young children up to play in the snow on Monday. They brought two caterpillar saucers, with each parent taking turns with one of the children in the circular snow sled as they slid down the side of a hill amid shrieks and laughter.

“It was so cool,” Julie Hammer explained. “If you can’t experience winter, to come up here even for an hour is amazing.”

Everyone on the hill, adults and children alike, seemed to have some type of snow “board” to slide down on. Some even brought ocean-going boogie boards and what looked like sawed-off surfboards to have fun in the snow.

The “sleds” were made of a variety of materials: foam, plastic, wood and even fabric.

Some visitors who forgot to bring anything simply slid down the hill on their backsides.

I was coaxed to put my camera down and take a ride on two of the sleds. I can honestly say it was the most exhilarating 10 seconds of my life as I rode down the hill for the first time.

There were dozens of families from all over San Diego County playing on the hillside. The license plate on the car parked in front of ours was from Arizona.

People love winter sports, even if it’s near freezing outside.

“We are lucky in San Diego to have the opportunity to go from surfing at the beach to sledding in the mountains in one day,” explained Chula Vista resident Peter Kluch, who made the one-hour drive to experience a day in the snow. “It was a very bumpy ride down the hill; I think I’ll feel it in the morning.”

If you do go out sledding this winter, there are a few safety precautions to keep in mind, especially if you have children along.

•Select the right hill – one that is not too steep and that has a long flat area at the bottom to glide to a stop. Avoid hillsides that end in a street or parking lot, ponds, fences or other hazards. Also made sure hillsides are free of obstacles such as poles, trees or rocks.

•Sled during daylight hours or periods of good visibility. Parents may also want to ride in the same sled with young children down slopes both for safety and comfort reasons. Encourage friends or relatives to hold onto the sled before releasing it when young children are riding down slopes alone.

•Dress warmly. Frostbite and even hypothermia are potential dangers of staying out in the cold too long. Be sure to wear suitable winter (and waterproof) clothing such as hats, gloves or mittens, wool caps and snow boots.

•Scarves are good to keep the neck and upper body warm but can get caught underneath sleds and thus shouldn‘t be worn during actual sledding activities. Parents may also want children under 12 to wear helmets, especially those designed for winter sports.

•It might be a good idea to bring along some hot food during a mountain day visit, perhaps even some warm soup in a thermos for the kids. Children shouldn’t really stay out in the cold for more than an hour at a time. At that point, it’s time to take a rest break in the comfort of a warm car or camper.

Before embarking on a snow day adventure, check the forecast for temperatures and weather conditions. Mountains can often make their own weather, and at unpredictable times.

Snowboarding has become an increasingly popular activity with teenagers. While it is possible to snowboard in our local mountains during drops of fresh powder, several winter resorts are located within a two-hour drive of San Diego to better accommodate enthusiasts. They include Bear Mountain/Snow Summit, Snow Valley, Mt. Baldy and Mammoth Mountain.

All provide unique experiences for snowboarders and skiers, ranging from beginners to advanced.

Bear Mountain has 12 lifts, 24 trails, and the only Superpipe in Southern California. Bear Peak’s 8,805-foot summit is Southern California’s highest peak served by a lift. The mountain (actually three peaks) offers an ideal proving ground for both beginners and experts alike. Call (909) 585-2519.

Snow Valley is located 100 miles from San Diego at the base of the San Bernardino Mountains. Slide Peak stands at 7,841 feet elevation. The resort features a packed powder surface, 12 lifts, 14 trails and offers something for every level of skier and snowboarder. Call (800) 680-7669 for toll free snow report.

Mt. Baldy (summit 8,600 feet) is located 110 miles from San Diego in the San Gabriel Mountains and many consider it one of Southern California’s best-kept secrets for winter recreation activities. There are 17 trails and runs but with generally less-crowded slopes. Call (909) 982-0800.

Mammoth is located father up the Eastern Sierras, about a seven-hour drive from San Diego, but is considered Southern California’s best resort and one of the best resorts in the western United States with snow depths from 75 to 115 inches. There are plenty of monthly happenings, sporting events and festivals, including snowmobile adventures. Call (800) 626-6684.

It is important to remember to avoid courses where there are obstacles present. Abdominal, neck and facial injuries often can occur following a nasty spill.